AP Story Lead: “Military veterans in prison are more than twice as likely to have been convicted for sex offenses as nonveteran inmates, federal researchers say. They cannot say why.”

I found this AP article via James Taranto at “Best of the Web Today”. He is all over the study’s so-called ‘findings’ already (eighth item) and it is worth the trip just to read his debunking.

I think he was actually being kind, because he probably could have gone further in his critique. I base this observation on what the reader will find buried towards the end of the original article:

The study found that veterans in prison were older, more educated, more likely to have been married and more likely than nonveterans to be incarcerated for violent crimes or offenses against women or children.

Many of those findings can be explained simply by age demographics, Colby College sociologist Alec Campbell said.

Crime tends to decrease with age so older inmates are more likely serving lengthy sentences. Veterans as a group are older than the general population, so Campbell said it is not surprising to see a higher percentage of veterans imprisoned for violent crimes, which carry longer prison sentences.

Ahem…..
How many of these incarcerated ‘older’ veterans became veterans courtesy of their local draft board?

A quote from Taranto helps to perform a further analysis:

Thus, if just 20 of those 145 per 100,000 veterans (under 14% of the incarcerated Vets) were draftees, ALL differences between the two groups would disappear.

From what we see in the article, and without further detailed analysis of the prison population, the Vet/NonVet categorization and ‘disparity’ is no more relevant than categorization by eye color.

However, I suspect a more detailed analysis would reveal a story that might never get reported in today’s environment – that those who have served in today’s modern all-volunteer force trend towards much lower percentages for all types of offenders in the prison population – ESPECIALLY if you filter for fraudulent enlistments by bad actors who get past the system (hopefully not as bad a problem today as in my day).

Taranto closes his piece with:

Probably the AP was just being sloppy, but the result was to smear Americans who have served their country in uniform.

As it appears to me, that much sloppiness in one place can only occur as part of a willful act.
The AP didn’t even care to think about the meaningfulness (or meaninglessness) of the data – It was:

The proof is in how the title: "Study: Imprisoned Military Vets More Likely to Have Sex Crime Convictions Than Others" contrasts with the complete and total of quotes from an author of the study in the article:

"We couldn't come to any definite conclusion as to why,"

"I don't want people to come away from this thinking veterans are crazed sex offenders.

"I want them to understand that veterans are less likely to be in prison in the first place."

IMHO the AP owes veterans yet another apology

Defense Tech has a great new post up with a video clip showing a SAM Trap back during the Desert Storm days.

Life is far more pleasant when it is hard for your enemy to find you and see you.
Posted by SMSgt Mac at 18:59 No comments:

Dang it! TSSAM is still getting me in hot water.

I'm going to catch heck from my fellow TSSAM Alums for mistyping TSSAM as TASSM over at Defense Tech . My bad, but I claim extenuating circumstances of fatigue and phonetics: We used to pronounce the acronym as either "T-Sam" or "TAZ'em".

By way of amends, and as a partial explanation, here's some rarely seen (but not rarest) TSSAM patches, and I throw myself at the mercy of the TSSAMers.

(Note to the general public: Trust me, that is all one can do. Flight/Weapons Testers eat their young.) 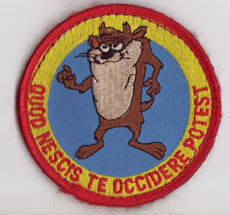 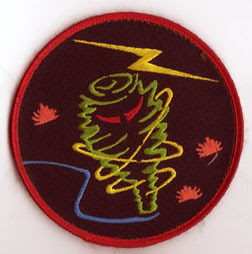 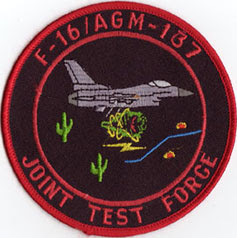 "Breath of the Beast" has a great post up - a little bit of history with a lot of common sense.
Posted by SMSgt Mac at 21:40 No comments:

We Win They Lose

What a great concept!

Now, where else did I see this strategy recently? Hmmmm....Oh Yeah - Here
Posted by SMSgt Mac at 21:52 No comments: