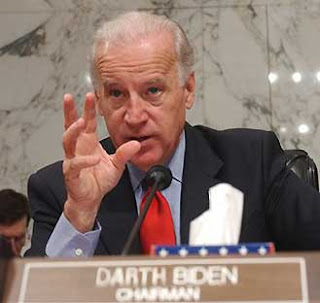 "You don’t need to see his identification….. "

"These aren’t the droids you are looking for…. "

Running Biden’s big quote from the linked article through my handy de-BS’er to peel away the static we find:

"It's not the American people or the U.S. Congress who are emboldening the enemy," said Joe Biden, a White House hopeful in 2008. "It's the failed policy of this president — going to war without a strategy to stop us (Democrats) from subverting the war effort, going to war prematurely before making sure we couldn’t twist it to our political advantage , going to war without enough public relations troops to overcome our allies in the mainstream press."

Biden made his mark as a foot soldier in the Cowardly Congress that abandoned South Vietnam. He leads the effort this time.

The disdain with which I hold men such as Biden is beyond written or verbal expression. Oh, I suppose I could try and just paraphrase Curly by simply stating “I crap bigger than Joe Biden” but then... doesn’t everyone?
Posted by SMSgt Mac at 19:53

Email ThisBlogThis!Share to TwitterShare to FacebookShare to Pinterest
Labels: Cut and Run, Politics, War on Terror