Murtha Watch: Possibly Part 1 of Many

I've been considering making the UNHon. John Murtha the object of a running theme for quite a while now and haven't yet decided to definitely take on the task (Since I'm way behind on what I've already publically promised I will remain undecided for a while). The first part of deciding whether to take this on is to really evaluate and get to know your enemy -- and as retired military man, parent to a once and possibly future military man as well as in-law to military personnel, make no mistake Murtha IS my enemy. So I've been asking myself what kind of people would vote for this, this....well, whatever he is I can't really tell, but I suspect 'deranged' might be one of the adjectives.

Tonight I visited the Desp. John Murtha's House website and found a link to a map of his district here. (There is also a huge .pdf file on his site that will make an excellent reference for further study). A less detailed representation is below: 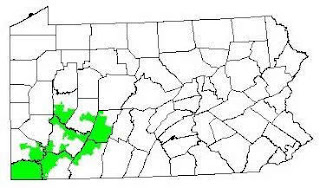 Fascinating! - And the Dems took Texas Republicans to task (and court) for Gerrymandering?
The demographics of Murtha's district deserve close analysis all their own, but at first blush it looks like his district was designed to avoid paved roads and cable access as much as possible. I suspect Murtha's base is largely poor, comparatively uneducated, and has statistically less access to a broader world view than some other places [update: based on the last election I have to also wonder about Pittsburgh]. (Oh! And his base includes a lot of people on his pork gravy train of course). I'll bet the vote in that district split largely along the Greedy-Ignorami Alliance vs. the Informed Patriot Defenders lines. Too bad the Greedy-Ignorami got out the vote last time outnumber the Patriots 2-1.
Another Update:
Maybe I'll just read Murtha Must Go and provide practical support to their effort. Catch their latest observations here.
Posted by SMSgt Mac at 20:23