Yowzaa! A Blast From my Past.

AIM-4F/G and WSEM Test Station
Hadn’t seen one of these in decades....... until now. 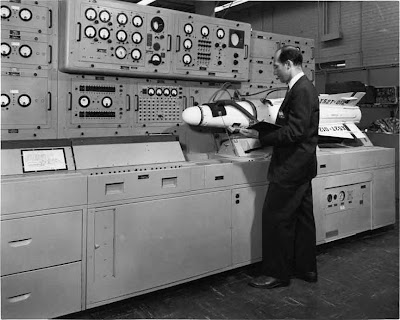 We really had to know what we were doing with the old systems.....
I was in one of the last 316X1L tech school classes to be trained on this piece of test equipment and the AIM 4F/G/WSEM missiles. We didn’t train on the missile shown, which looks like it could be an AIM-26B which was already obsolete in the US by my time, or it could be (from the looks of the dome and strakes) the Swedish license-built version, which was in service for years afterwards . The missile could even be the infeasible XGAR-11 (Experimental Guided Air Rocket) NUCLEAR version I’ve heard about but have never seen.

After the schoolhouse, I never saw the station or a functional AIM-4 again, because I never got stationed at an Air Defense Command F-102 or F-106 base. But we missilemen all got tested on them yearly for promotion purposes. Until about the time I put on TSgt, around 40% of our Specialty Knowledge Test was on these few systems, even though only about 10% of the career field EVER got any hands-on experience with them….which sucked unless you were part of the 10%. Heck, this station AND the missiles had "tubes", and the WSEM had an internal recorder and strip charts among other things.

I did have a funny EOD experience with an inert 'systems trainer' AIM-4F in Alaska once. But it was only funny because I wasn’t the one having to explain what it was doing in the dumpster outside my off base apartment. [;-)
Posted by SMSgt Mac at 22:38