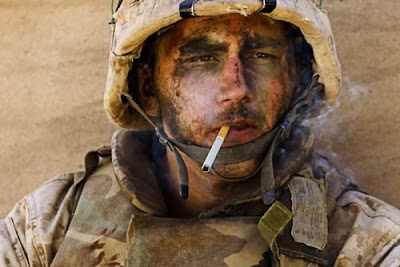 The LA Tmes is 'revisiting' this photo and Marine today.
I got into a little e-mail dustup with an MD over this pic back when it was first making news. The doc had posted someplace that he (paraphrasing here) was greatly alarmed over the young man's use of tobacco and was concerned that it didn't send the right message to the youth or public at large.

I pointed out to the MD that he had absolutely ZERO perspective and insight as to what really were the different relative threats in this young man's life at that time. I'm pretty sure I quoted Chesterton. I wonder what that doc thinks now?

Good Luck James Miller.
Don't give up. Get Well.
God Be With You.

Kudos to Mr Sinco for not forgetting Miller. Even though I'm sure we'd disagree on a lot of things, the merits of helping a friend in need isn't one of them.

And an extra-wide combat boot up the a$$ to the LA Times editors for the obvious agenda piece on Veteran's Day.

Update in response to Commenter: I unfortunately can't claim to have been civilized at first ( I am a retired Senior NCO after all) . I was so pissed off initially that I hit him hard with this photo accompanying the text. Civility came later after I calmed down.

Salutations, Mac, from the son of a retired MSgt who served in Korea as a tailgunner in a B-29.

A little late to wish you a happy Veterans Day, but I will anyhow.

I linked here from Jules' site, and like what I see-thanks!

I admire your tact with that doctor...I'd have probably said something like ____ off, Doc. But then, I was Army.

That picture sure brings back memories...I hope that Marine is doing all right today.

Thanks for the kind words, but I'm afraid I can't claim I was too polite at first (see update).

One of my heroes was my Uncle Don who was a B-29 tailgunner in Korea (and in the first B-52s before he became a survival instructor for the next twenty or so years).