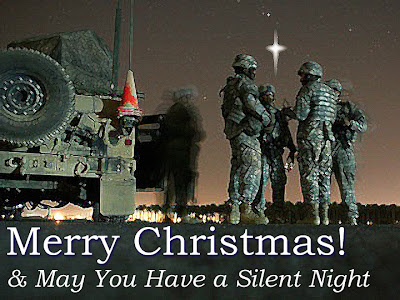 Just after Thanksgiving every year I start thinking about how Christmas in the military can be a little different than the average American’s. Maybe it is because when you join up, you gain another family to think about: and you think about them every year, whether we’re at war or at peace.
I get particularly sappy about it I guess, because I worked my first 10 Christmas Eves and Days.
My first Christmas Eve with my new family was when I was still in Basic Training. We were far enough along in the program that on “non-training” days we had some liberty in the immediate area of our WWII-era barracks (only the wusses were in the 1000-man dorms at that time ~wink). We actually built a Christmas tree of sorts, out of 7-Up and Coke cans on a picnic-type table while waiting our turn to call home from an adjacent bank of payphones. I spent my first Military Christmas Eve sitting around the aluminum can tree exchanging family Christmas traditions and stories.
My second Christmas was when I learned about “SP Augmentees”. I spent 12 hours guarding a stateside bomb dump with a brick (radio) and an empty M-16. The single guys pulled ‘the duty’ on Christmas Eve and Day so the married guys could be with their families and the married guys who “didn’t party” pulled the duty on New Year’s Eve and Day. It was a ‘win-win’ for everyone. For the next eight years it was usually the same thing. In Alaska and Iceland, the Godless Soviets liked to exercise the Air Defense Intercept Zones on holidays -- So we’d spend Christmas building, fixing, and hauling weapons to the flight line or, if we were lucky, we’d just spend all night plowing and re-plowing the road between the munitions storage and alert facilities IN CASE the Bears came to town. Now in the end we weren’t getting shot at, and we were always pretty thankful for that. But we knew it could have been different any time some world leader cleared his throat or tripped over his own feet.
The public tends to forget how close we came to Armageddon several times over the length of the Cold War, if they ever noticed at all, and the American Military is what lets them get away with such poor situational awareness and a peculiar forgetfulness. As our brothers and sisters now serving can attest, a lot of the Public doesn’t really like to think too much about how dangerous the rest of world is, and some of the less gifted in the populace actually think it isn’t that dangerous of a world at all.
Thank you to all of those now serving EVERYWHERE for joining and becoming part of the continuum: forever protecting the appreciative and the oblivious alike and without reservation. May you have a most merry and memorable Christmas with many, many, more to come.
(original photo was ABC News)
Posted by SMSgt Mac at 14:10