Ah! Another ‘redacted’ summary is out? Mmmmmmmm. Must get one.

"We continue to update and expand our protest," McGraw said during an April 3 teleconference in which he walked reporters through a 13-page redacted summary of the updated protest. "As the team discovers things, they're going back and adding to the supplemental protests."

He said some of the protest points are being expanded and clarified as more information from Northrop's proposal and the Air Force's decision-making process is revealed to Boeing's protest team. In the additional documents, Boeing continues to argue that the air service's concerns about boom safety and maturity and "Northrop's very complex build plan" and "risky" schedule should have lowered their competitor's score further than it actually did.

Boeing also argues that costs were not accurately compared. "It seems like a lot of our commercial data was not accepted, our fixed-price data was not accepted as fixed," McGraw said. But Northrop's data was more readily accepted in spite of "grossly understated" military construction costs, he said. "In general, there seems to be a significant leveling of costs at the 11th hour."

Let me predict what the revised (expanded?) protest says. I tried outlining the last ‘summary’ and got tired of writing:

Wrong size!
Changes made!
Penalized for commercial costs!
Graded us too hard!
Graded them too easy!

So I'm guessing it's just more of the same [ note: I checked: it is --- except it has that freshly 'lawyered' smell.]

I smacked Boeing down on the heart their ‘commercial cost’ claim in the original summary here. This is not to say that Boeing won’t find a sympathetic ear someplace because the FAR DOES allow the contracting official some leeway in determining if something Is ‘commercial’ or modified to the point that DoD-grade cost/price data is necessary. Some second-rate, second-guesser COULD disagree with the responsible acquisition official, but in a proper review that wouldn’t be enough to uphold the protest. Boeing is ‘piling-on’ in the hopes of getting enough ‘second-guessing’ going to provide their helpmates in Congress do that voodoo that they ‘doo’ (not a typo).

They have two other 'cost' issues having to do with 'learning curves' and O&S estimates (click to enlarge):

Now, the 'learning curve' disagreement has to do with mandating credibility. Can Boeing DEMAND its Customer believe their numbers? Is it Boeing's position that the Customer's analysis CAN'T be right?
In reality, all that is important to the legality and propriety of the contract award is that the AF has a reason for not believing the 'learning curve' number or believing in their own estimation more.

The O&S costs claim is probably the most overtly specious argument Boeing makes in the original protest summary. It is quite common knowledge in the logistics field that the most important support driver of any aircraft weapon system is HOW it is used. Boeing's insistence that Delta Tech Ops has more insight into Tanker O&S costs than that provided by the fleet of KC-135Rs is ludicrous. As old as the Rs are, their avionics and propulsion systems are closer to the age and technology of the 767 design than Boeing would like to acknowledge. Since avionics and engines are typically the major cost drivers on non-LO aircraft, I would prefer using KC-135R data over a predicted 767 extrapolation from civilian operations as well. The only part of the KC-135R supportability that probably wouldn't translate easily is the heavy structures contribution: something the AF should be able to factor for quite easily from their own experience. It is really hard to tell if this complaint is just 'piling on' or actually a manifestation of Boeing's hubris.

Boeing is still playing heaviliy with the scoring system inside their Disinformatsia campaign. What they’re doing is siimply “oversimplifying to obfuscate” . For example, In the original protest ‘summary’ they show this (click to enlarge): 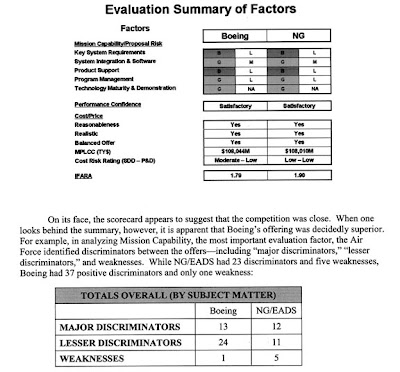 Which means absolutely nothing without the weighting factors for each area, difficulty or ease in improving (risk) in each area, OR relative scores in each area.
For example, the 5 NG so called ‘Weaknesses’ could have been in the least important requirement in 5 different sections and each might require very little effort to change or correct.

Now did it happen exactly that way? Probably not. But it happened close enough to this way for the AF to select NG for the contract.

Boeing doesn’t like their score. Boo Hoo. Help them Congress(not)!

When I get to Part III, I want to get past the ‘grading’ issue and get on to the ‘size’ issue because I’m getting really tired of Boeing’s misrepresentation of how the candidates match up, including the one Boeing didn’t even bid, but keeps talking about: the B777.