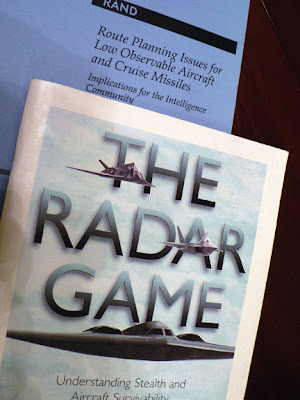 It seems like we're starting to see even more misinformation (or is it dezinformatsia?) on the JSF than usual on the web. It almost feels like a concerted movement to undermine the whole program. I'll give a specific example of such disinformation: "The F-35 is Very Low Observable (or Low Observable) from the front (or similar limited qualification)". I've run into this kind of statement more frequently ever since a certain Australian website published some cartoons of the F-35 with drawn patterns illustrating guesses at RF signature patterns based upon eyeball estimation of the effects of the F-35's Outer Mold Line shaping....and called it a 'study'.

There is absolutely nothing official and available on the F-35's RF signature (surprise? duh!) that would support such an assertion. All that I have been able to locate as sources for such information are speculation, allusions and inferences. While at the same time, one can find multiple 'official' programmatic sources stating the F-35 RF signature characteristics are described as "Very Low Observable"(VLO), "All Aspect"*, or "All Aspect VLO". I have an idea these misconceptions come from a basic ignorance of what 'Stealth' is, how it 'works', and how it now shapes the battlespace where radar once dominated.

*Note: The F-22 is commonly described as 'all aspect' as well, but in using this term for fighters it often excludes/excuses the signature an angle, as narrow as possible, to the direct rear of the aircraft.

The following commentary is taken almost verbatim from a comment I made on another site a while back, concerning what you need to know - as a minimum - to even begin intelligently discussing the fundamentals of Low Observables (Stealth). I'm posting it here now because I have a feeling I'm going to need to point people to this kind of information more and more.
____________________________
If one insists on discussing or opining on Low Observable "technology", one would do well to begin by reading Paterson. In his Survivability Benefits from the Use of Standoff Weapons by Stealth Aircraft(AIAA 1999-0105503), Figure 2 is a nice graphic with a range of objects, their estimated signature return in flat plate square meters and equivalent dBsm. On the high end we find a warship with 10000 sq meter return (about 40 dBsm). On the low end we have a small insect at .0001 sq meter return equivalent (about -40 dBsm). In Paterson's 1997 paper Measuring Low Observable Technology's Effects on Combat Aircraft Survivability (AIAA 97554) his figure 3 has a 'notional' Radar Cross Section (RCS) listing for various aircraft from Howe's Introduction to the Basic Technology of Stealth Aircraft: Part 1 & 2 (see Paterson for full citation) There we see that Howe estimates the B-1B return at .75 sq meter, or over an order of magnitude less than has been speculated on elsewhere.

Reading these resources will give one some proper perspective on how one should think about the effects of the relative RCS of different objects on their detectability. If you have the time and the math background, get a copy of Radar Cross Section by Knott, Shaeffer & Tuley. This resource will also give you some background on how RCS objectives are selected, optimized and implemented in an aircraft's design to satisfy mission requirements.

But none of the above actually tells us what the challenges are in operating in a threat environment. I only know of one public source that deals with it, and we're in luck: RAND has been really expanding its ".pdf file" archives online of late and the little Route Planning Issues for Low Observable Aircraft and Cruise Missiles is once again available, although somewhat dated. [Update from original: Dr. Rebecca Grant's The Radar Game has been reissued online under the auspices of the AFA's Mitchell Institute. The Radar Game should be considered a standard primer on the history and development of radar and it's antithesis: 'Stealth' for the general readership.]

Now turn to Ball's AIAA classic textbook on 'Survivability': The Fundamentals of Aircraft Survivability Analysis and Design. You can get the first edition used cheap these days, but as it predates the public arrival of Stealth, LO is not a separate topic - you have to read between the lines. The second edition gives an overview but does not focus on stealth per se, but it is covered. Most importantly, both editions thoroughly examine and explain the 'kill chain' which will provide one some perspective on what all this 'low observability' actually does to disrupt the kill chain. LO can break the chain at every link, and be used to exploit even the smallest bit of RF clutter, confusion, or gap, as well as natural perturbations in the environment.
Posted by SMSgt Mac at 17:56