Thought I'd post something special to commemorate the Centennial of Naval Aviation. There may be more. Here's a crop of a photo (copyright mine) that's never been published anywhere before.

Three sailors are relaxing on the flight deck of the USS Langley en route from Hampton Roads to their new home port in San Diego, CA in 1924. In the photo, the sailor on the left is a machinist's mate who fabricated parts for the embarked aviation assets as well as the ship. A 'Journeyman' of History: an Aviation Machinist's Mate before they were given the title. He would leave the Navy just in time for the Great Depression. Hard times took him back to the home he had run away from in Durango, Colorado in 1912 -- when he was 12. There he would 'cowboy' on a ranch and start his family. When war clouds loomed, he took his young family back to SoCal, where he was a machinist,fabricator, and tool & die man for a shop that was a Lockheed subcontractor through the end of WW2. Among other things, he fabricated manifolds (intake/exhaust) for the XP-38. 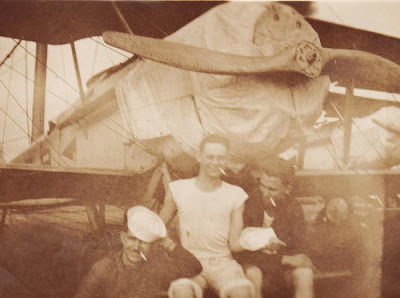 He is my late Grandfather -- my late Father's Father. He introduced me to Logarithms and Trigonometry before I knew what they were - and made certain I would never get a tattoo by pointing to his own many inkspots as dire warnings every chance he had.
Posted by SMSgt Mac at 22:06