Stars and Stripes Lets the Military Down… Again

As if anyone need any reminding that today’s Stars and Stripes is NOT the same paper of World War II fame, here’s a list of articles that a Stars and Stripes ‘reporter’, the delightfully-named J.D. Flack, has written since the Sendai Quake occurred.

One of these Headlines is Not Like The Other…
Can you tell which one? The list is from oldest to newest:
• Misawa residents stock up on supplies as they await electricity 3/12/11
• Power restored in Misawa City; base still down 3/12/11
• American rescue teams arrive at Misawa 3/13/11
• Base up and running, Misawa now faces off-base heating oil shortage 3/16/11
• Misawa leaders want quick answer on how many residents plan to evacuate 3/18/11
• First flight carrying U.S. families out of Japan expected to leave Yokota Air Base on Saturday 3/19/11
• First military evacuation flight leaves Japan 3/19/11
• Misawa's 14th Fighter Squadron looking to deploy to stay sharp 3/20/11
• Misawa residents pull clean-up duty at nearby fishing port 3/17/11
• Relief supplies rolling into Misawa 3/20/11
• Misawa educators reach out to students as base schools reopen 3/21/11
• Navy crews reach quake victims with life-sustaining humanitarian aid 3/23/11
• Reagan air crews pause relief operations to decontaminate 3/23/11
• Snow slows Navy relief efforts at Misawa 3/26/11
• Navy races to clear port so needed supplies can reach land 3/25/11
• Families who choose to return to Japan do so at their own risk, military officials say 3/29/11
• Voluntary departure program: A safe haven or a free vacation? 3/29/11
That’s right. This S & S 'reporter' managed to string together about 2 1/2 week’s worth of actual articles on what was going on in Japan in general and Misawa specifically, before caving in to the more base instincts of the ‘profession’.


Hit Piece
Flack’s latest amounts to little more than a hit piece on the families (from all the bases in Japan) who elected to accept voluntary evacuation. No deference to or insight into survivor psychology. No enquiries into the benefits to the well-being and effectiveness of the active-duty personnel who can now focus on the mission instead of worrying about loved ones. No questions as to the ‘net’ costs or benefits: the costs and benefits of maintaining a dependent population in a disaster zone with a strained infrastructure vs. the costs and benefits of getting the dependents away from the area. No consideration as to what kind of strain such a callous article might place on the military communities at Misawa et al as things otherwise return to a new ‘normal’.
The ‘article’ was apparently executed with the help of a S&S someone named ‘Sam Amrhein’, whom I suspect was the ‘juice-boxer’ doing the leg-work in Hawaii trolling for those upbeat impressions on fun-seeking ‘Quacationers’.
‘Congratulations’ to Stars and Stripes.
I hope you enjoyed the story access you had up until now, Mr. Flack, because I suspect from here on out most of the U.S. military community in Japan will be telling you EXACTLY where to put those pursed, red lips of yours. 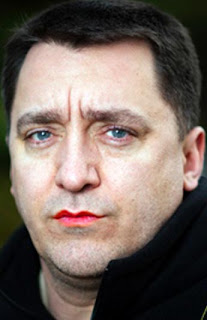 J.D. Flack, S & S Reporter
﻿Update 1April 23:48 Hrs: When my family in Misawa was offered the 'voluntary' evacuation (they have stayed) and I learned it was only for 'up to 30 days', I thought: "What's the use of that if the reactor situation actually gets much worse?" But I forgot about the psychological effect that the ongoing aftershocks might have until I saw this map. I was reminded of the sinking feeling I felt with every aftershock experienced after the Northridge Quake in SoCal, and the swarms of tremors we would experience at Elmendorf AFB from time to time in the mid-70s. As of this update, Japan has had 884 quake/aftershocks since March 11, and just under half of them (409) have been over 5.0 on the Richter Scale. Watch the map linked to above as the timeline progresses and tell me most people, especially the children, couldn't use a break from the shakedown they're getting and ask yourself how such a break can be oversimplified by a media outlet to the point someone could accuse them of having "too good" of a time getting away.
Posted by SMSgt Mac at 15:16