Defense News has a copy of the ruling.
It ends as pretty much a “Draw”. Parties were left with an option to file for other cause, but who would be that stupid?
I was fairly sympathetic to the 'Contractors' (was GD and McDonnell Douglas - Is GD and Boeing) because I felt they had a good case that the Government did withhold 'superior knowledge' but  essentially the Supreme Court observed, that even though there was 'Prima Facie' evidence the contractors were correct, national security concerns trumped the civil case.

Here's a Google Earth shot of what I believe is the only A-12 mockup in existence. 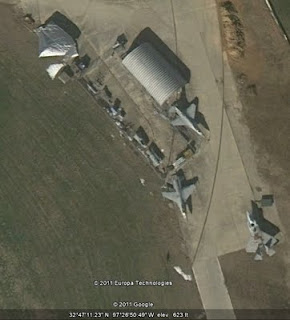 It is in the upper left with the outer wing panels removed. It looks like 'home plate'. They put a cover on it sometime in the last three years or so, and as you work past the old F-16s down to the lower right corner, you see Lockheed's JAST engine test article.
Posted by SMSgt Mac at 22:40