(I await the day that Flight Global gets their ‘captcha’ feature worked out.)

In two back-to-back posts, Steve Trimble channels that doyen of defense malcontents, one Winslow Wheeler, yet AGAIN, on a defense topic near and dear to my heart: O&S costs. Using data acquired ‘somehow’ by Mr. Wheeler (now, ask yourself: where might a “I-know-defense-better-than-the-DoD”-cawing magpie who worked decades inside the Congressional Staffer Club ‘might’ have gotten a hold of such information, if real?  You get three guesses…), DEWLine presents graphics representing data we are not provided, and data I suspect that no one in Flight Global was qualified (who was also available) to interpret. In short, other than for its shock! value effect on the innumerate, the information is worthless as presented, and while it may raise a question or two, it answers NONE of them.


Writing about "costs" is always tricky. Numbers can vary dramatically depending on what gets included. In this case, we're talking about operational costs. This includes operations costs, including fuel, parts and maintenance, as well as interim contractor support and manpower. It excludes modifications funded by procurement accounts. The total cost number is divided by the total number of flight hours flown by the fleet, and that is the operational cost per flight hour.

Steve Trimble nails the part about costs being ‘tricky’. It may be even said to be ‘trickier’ than he realizes. Here is the complete list of general O&S cost categories, with areas with the largest potential for huge confounding factors noted in red :

Aside from the plentiful catchall ‘Other’ categories, there is quite a bit more in this list than “operations costs, including fuel, parts and maintenance, as well as interim contractor support and manpower”. I think Mr. Trimble may want to revisit his ‘list’.

If one views the graphics provided with an eye towards ‘what is different’ between ‘comparable’ weapon systems, it should lead one to consider WHAT is driving these differences? Without the actual data in hand I am left with these questions: 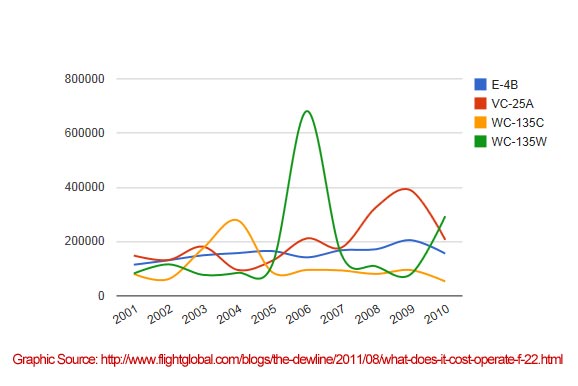 RE: WC-135W O&S Increase in 2006. I have a feeling there is no mystery here, but how much did this spike have to do with preparation/upgrade/equipping then forward deploying the WC-135W forward to monitor the NoKo's nuclear testing debut? ﻿

RE: VC-25 O&S increase in 2009. As overseas deployment of AF One involves a major logistics planning and execution overhead, how much of the 2009 bump was due to President Obama visiting more countries that year than a lot of Presidents do in four years? It is not as if no one noticed. Or were there upgrades on the bird that went into PDM that year? How much of the increased cost came from transitioning to a new support contract with Boeing Wichita? 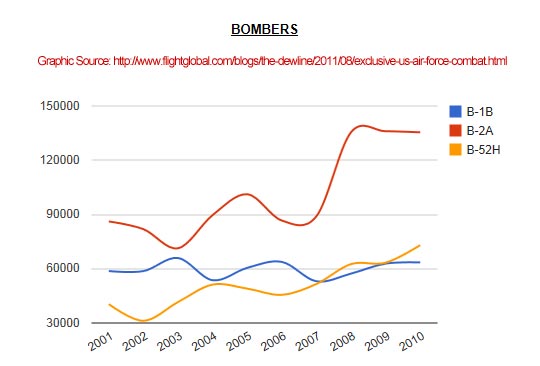 RE: That 'Wild' B-2 O&S increase from about 2004. Yes, 2004. The charts ‘smoothing’ function combined with cyclical cost events tend to mask what could be the costs of implementing an upgrade program in PDM. What percentage of these ‘increases’ are (primarily) related to implementing the challenging yet wildly successful AHFM upgrade? I ask, because the ‘curves’ appear to strongly mimic the PDM AHFM upgrade implementation timing. I suspect some of the 2010 B-2 data also has all the costs involved to get the bird that caught fire in Guam in 2010 back home. Expect future depot costs to show up in the out-years for other upgrades. 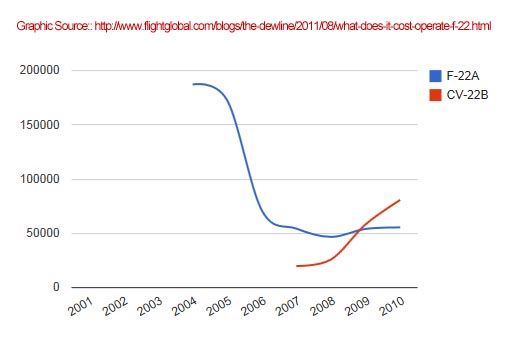 These are just a few of the most obvious questions raised, but I would be remiss if I did not also warn the reader against the world-class ‘chartsmanship’ contained in the DEWLine graphics. I particularly enjoy the use of the ‘smoothed’ line function that make ‘Highs’ seem ‘higher’, ‘Lows’ seem ‘lower’, and the swings between the two seem more dramatic. The use of line vs column is a minor nit, but it promotes the idea that the data is continuous instead of in discrete annual snapshots. Most egregious of all is the use of non-zero baselines which amplify the differences in the data within each chart.

If I had to offer one piece of advice to the Flight Global crew it would be to stop hauling the mail for Winslow Wheeler and CDI. Winslow may look like the Tech-savvy engineer of the future Montgomery Scott (i.e. “Scotty”) on Star Trek, but to these eyes (ie IMHO) he operates more on the level of Harcourt Fenton Mudd.
Posted by SMSgt Mac at 22:33

Speaking of chartsmanship, how misleading is that decision to delete the 0-30000 range on the Bombers charts. Makes the differences seem much more significant. I guess they believe that telling a story is better than telling the truth. Very disingenuous indeed.