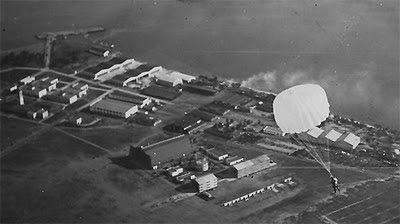 Here's some views (click on all to enlarge) of an interesting photo of a parachute jump circa 1925/26 over Naval Air Station North Island in San Diego. The photo, like those posted earlier, comes from my Grandfather's USS Langley Memories book, but I'm sure he acquired vs. actually taking the photo. It seems to have been quite popular among the fleet to swap ships photos, and I would assume this photo may have been taken from a squadron plane that would be assigned to North Island or the Langley. The caption only read 'Parachute jump San Diego', but confirming it was North Island was easy: see the Wikipedia photo of North Island (ostensibly in 1925) with the USS Langley tied up in the background as a bonus.

Closer examination of the photo shows the parachutist isn't so much as heading towards the base as he is probably just swinging widely in a pendulum back-and-forth: 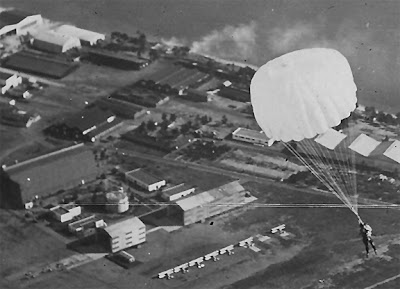 Even closer examination illustrates that this early parachute rig is either still 'un-twisting' at the risers or that this early rig provided absolutely no control to the wearer. If the latter is true, the jumper was completely at the mercy of fate after the ripcord was pulled. (Too bad about the scratch in the original.) 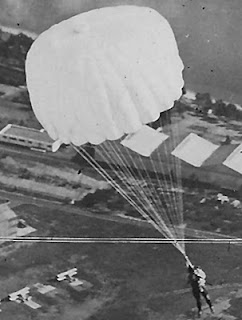 Here's a scan of the full photo as it sits in my Grandfather's album with no Photoshop (other than sizing): 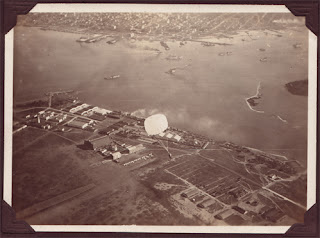