Defense Tech is 'moderating' a comment of mine I tried to post on this thread. The last time they did this my comment disappeared into the Ether. I suspect it is an administrative thing where they don't like a .com, or an acronym vs. malevolence (how petty would it be otherwise?), but no matter-- I saved a draft first. I tried to post:

Stop the presses! Winslow Wheeler has discovered that the entire logistics support package for the F-35B was not prepositioned on the Wasp. Someone tell Winslow that the WASP is cruising about 80 miles from F-35B home base in Pax River and that this is NOT a supportability test. Then ask him exactly DoubleU Tee Eff is his point?  I would also suggest the unattributed 'author' of this piece refer to earlier Mil.com articles that note the 2 weeks was the shortest(!) expected period expected for this round of shipboard trials and that the WASP was booked for much longer. Are 'we' now beating up programs for accomplishing tasks slightly slower than the fastest possible time?

And this is what I got: 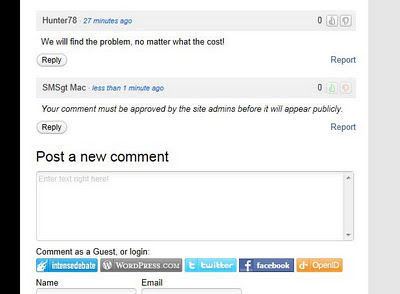 Update at 2005 Hrs: My guess is is that ol' Winslow Wheeler just couldn't let positive news get out on the F-35 without a little caviling. This fey attempt at shaping the budget battlefield is pathetic in light of the real story:

Bloomberg: The F-35B short-take off and vertical landing version finished three weeks of tests on the Marine amphibious assault ship USS Wasp, achieving “all planned flight envelope test points,” Joseph DellaVedova, a spokesman for the Joint Strike Fighter program, said in an e-mail. “We’ve been pleased with the initial sea trials” and the aircraft “performed to predictions.”

Be glad you did not get plastered with krap. I was practicing my Google-Fu last week and posted a couple of comments on Bloomberg.com's forums. This is what I got in return "You my dear sir lack any sanity or judgment at all. You are allowed in a free country to express your opinion and comment. But, now, STFU!" My offense, saying that 9/11 was not a conspiracy :)

LOL! I love stupid 'Conspiracy Theorists'. The problem with really stupid people is that they have NO idea how hard it is to keep something secret even when it should be kept secret. This inability to grasp the difficulty in keeping secrets leads them to simultaneously 'see' what isn't there, while at the same time keeps them from accepting reality in front of them. 'Truthers' and their ilk really are best dealt with by laughing long and loud at them. They probably think you are part of the conspiracy.

what the fuck SMSgt Mac. you were always one to throw water on inter service rivalries and now you post that trash on DT???

come on guy what gives??? and on the Marine Corps Birthday????

Tweren't me. I made a follow up comment at the source. It could be any of the losers I smack down regularly. You might want to check the threads to make sure no one is posing as you as well.