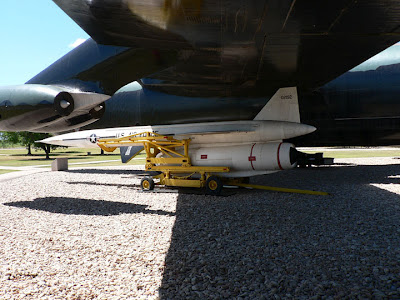 Work kept me from catching this story earlier. News slowly coming out about the new Long Range Strike platform in the works isn't substantial enough yet for me to determine if I should call it a 'great idea' or a waste of time in the continuing saga of fielding a new long range strike asset. How I think of it will depend largely on the unrefueled range and payload numbers if it is like the 'LRS-A'  in all other respects.
Phil Ewing at DoDBuzz 'disappoints' in this observation (emphasis in original):


By relying on proven technologies and by planning to evolve the aircraft over time as threats evolve, similar to the B-52 legacy fleet, the up-front acquisition costs will be reduced significantly from the B-2 experience. The average procurement unit cost is anticipated to be about $550 million in FY 2010 dollars for a fleet of 80–100 aircraft. The Air Force plans to utilize an executive-level, highly streamlined, stable oversight structure to manage the program, and keep requirements manageable, tradable [sic] and affordable. Funding in FY 2013 is $0.3 billion and totals $6.3 billion from FY 2013 – FY 2017.

End Note:
Right behind an almost pathological ignorance (perhaps often feigned?) of the Logical Fallacies, the thing that bugs me the most about the state of the news media today is the absolute lack of (again, perhaps feigned?) awareness as to how math or economics are actually applied within the topics on they write so breathlessly.

Well, if the myriad ways in which costs for the F-35 program are "accounted for" is any indication, they probably gave up after the second bottle of aspirin.

Not even the people that are supposed to be able to explain program costs to Congress agree on actual unit costs, or, even how it should be figured.

How could you expect a journalism major to understand the byzantine way in which the Pentagon and Defense Contractors hide true cost from any actual oversight?

You were doing 'OK' until the last sentence.

The F-35, just like ANY major acquisition program uses cost accounting in a manner that is specifically imposed by acquisition law.
The people who explain program costs do as good a job as those in Congress let them. If there is obfuscation, it is done willfully or out of ignorance by the 'overseers' themselves.

RE: Hide Costs.
Which ones are 'hidden'? How are they 'hidden'? Specifics please.