What was said vs. what the jungle drums ‘report’ 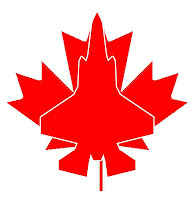 Yesterday, a headline at Defense News caught my eye: “Canada May Back Out of F-35 Purchase: Minister" . I read the article and immediately realized the missing part of the title was:
“Or May Not”.

A Modern Sorites Paradox:
How much ‘heap’ must be 'heaping' before it can be labeled a ‘widely interpreted’ heap? I mentally filed the piece under “Editorial License to Drum Up Readership” as there was nothing revelatory within the article aside from:

“Fantino was not available to confirm the comments, which were widely interpreted as a step back from Ottawa’s clarion defense of the costly F-35 program.”

This passage only raises the dual question of: How many ‘whos’ were required to be thinking the same and how diverse would the group have to be to be considered ‘diverse enough’ before the Minister’s statement could be ‘widely interpreted’ -- one way or another?
The Defense News article didn’t go into a lot of detail about the facts, other than also providing the following bits (along with the usual ‘costly program!’ fillers):

“According to Canadian media, he said the government remains committed to buying the jet, but noted that no contract has been signed”

The above has been, is now, and will be materially ‘true’ until production contracts are signed. This information has been in the public domain from the program’s inception, so one must conclude from the article as it is written that the only thing that makes this ‘news’ is that ‘someone’ really wants it to be news. The article was good for a chuckle, that’s about it. I moved on to the next topic. 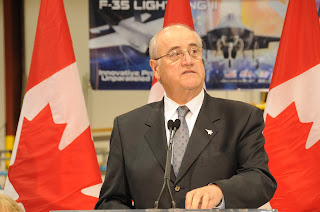 Today, the ‘news’ sources are buzzing with similarly titled pieces and in none of them can I find any information that indicates Canada is any more or less likely to buy or not buy the F-35 than they were a week, month, or years ago. I’m not asserting that their position is unchanged. I’m saying that there’s no indication of change to bother reading, much less writing about. Keeping away from the ‘interpretave dance‘ assertions of what the Minister’s statements ‘mean’ and sticking to what it is asserted he actually ‘said’:

"We have not, as yet, discounted the possibility, of course, of backing out of any of the program," Julian Fantino, associate defence minister, told the House of Commons defence committee Tuesday....

Fantino made the comment after a series of pointed questions from the opposition parties...

"We’re going to, at some point in time, make the definitive decision," he said. "We have not, as of yet, signed a contract to purchase." ....

Outside the committee, Fantino denied that the government is climbing down from its support for the jet. "I’m being realistic," he said....

"Until such time as the purchase is signed and ready to go, I think the only appropriate answer for me is to be forthright. We are committed to the program....

“We have not as yet discounted, the possibility of course, of backing out of any of the program. None of the partners have. We are not,” he told the Commons defence committee Tuesday.

Beyond the above, the articles get pretty redundant, pretty fast.

The ‘Someones’ come forward with….still nothing new.
Sticking to ‘pure’ news sources (yes –scare quotes around the word pure) we see more of the same. When you get into the blog and opinion piece worlds you see the opinions are split as to what the statement by Minister Fantino meant falls along the same fault lines that separate the anti-JSFers from the rest of the world. Those that are making hay over a perceived change in ‘tone’ are the same ones that WANT there to be a change in actual COURSE, Those that do not see a change in tone – do not. It would have been one thing if Minister Fantino or his party had previously stated that they could not change course-- his statements and under the conditions he made his statements are another.

This Sorites Paradox? Solved!
From review of the big and new media sources we will have at least learned one thing. To be ‘widely interpreted’ apparently means: “Lefty Canadian Politicians, Liberal media  and Anti-JSF Pundits believe 'something' about something else.
They see asserted claims of Canada's operational need for the F-35 as somehow in conflict with or contradictory to the Minister making a a public observation cocerning a long-time and publically known reality regarding contractual arrangements in the F-35 acquisition process.

The big question is: why is it surprising to anyone that a politician is ‘political’ and that everything they say or do is seen to be ‘political’?

Disclosure
It’s been quite a while since I’ve done an interest disclosure, and things have changed slightly since I last made one. Therefore, in case there are any new readers, please note the following. I do not now nor ever have been employed by Lockheed or Lockheed Martin or any of its predecessors. At the present time, I AM cleared on multiple LM programs including the F-35 as a subset of several programs led by multiple firms on which I am working or consulting. I do not coordinate my observations or confer with any of the interested parties in what I do write about or do not write about. I do not talk or write about inside information: work specifics on topics that I am currently working or have reason to believe I might be working in the foreseeable future. I take special care to ensure anything I do assert other than opinion is formally and acknowledged officially (vs. accidentally or malevolently) released material in the public domain. I further strive to clearly identify anything that I do assert as opinion as being same, and try to provide facts in evidence supporting my opinions when necessary.
Posted by SMSgt Mac at 20:32

The significance of this is that the Conservatives aren't known for backing down or admitting error. This statement is basically meant to give them maneuvering room in the event that F-35 costs escalate and delays mount to the point that Canada has to look at other options for replacing the CF-18 fleet. The Conservatives are shortly going to be engaged in a series of pitched battles with public sector unions as they cut back spending - they don't want to be exposed to additional criticisms about billions of overruns on a fighter program when they're taking an axe to left wing sacred cows. (In Canada, it's generally been the rule that the centrist Liberals can cut anything with scarcely a whimper from the left. If the Conservatives even fail to increase spending, they're accused of feeding children to the wolves, etc.) You're right, though - this statement isn't the result of any material change in the F-35 program.

Great comment. As money gets tighter, the hounds will only howl louder.