Why Suddenly I Find Myself Writing So Much About the LCS

Frickin' POGO is the reason.

I had to do a double-take of the top banner on the page to confirm I really was still at the National Defense Industry Association's website "National Defense" on one of their 'blogs', when I read a  piece titled "Navy to Consider Buying Only One Littoral Combat Ship Design".

1. The title either is missing a question mark or is misleading. Nowhere in the body of the post does anyone in the Navy indicate that they are considering a single type buy. Only, when asked, under what conditions they might consider doing so. BIG difference.

2. RE: Critics. Rule 1, There are always critics, and Rule 2, POGO is always a critic. And on this particular topic not a particularly effective one: http://www.elementsofpower.blogspot.com/2012/05/project-on-government-oversight-still.html


The NDIA article caught my eye, because it is as out of sync as you can possibly imagine with other LCS news also recently out and floating around on the same topic .
From Navy Needs Both LCS Versions For War With China, Iran; Navy UnderSec Defends Program :

While the Littoral Combat Ship is not suited for the front lines of a war with China, it would provide vital protection to US supply lines in such conflict, said Under Secretary of the Navy Robert Work, and against Iran, LCS would be in the battle from "day one," with eight LCSs ultimately operating out of Bahrain. Indeed, the two potential theaters of war are so different that the Navy may consider focusing the "much more maneuverable" Lockheed Martin version of the LCS on fighting fast attack boats in the narrow waters of the Persian Gulf, while the very different General Dynamics design, with its larger flight deck and fuel tanks, operates primarily in the vast reaches of the Pacific.


And from another article covering what Under Secretary Work was saying either at that time or proximate to same titled LCSs Could Be Based in Gulf, Says U.S. Navy Undersecretary:

Freedom (LCS 1) is to make a demonstration deployment in 2013 to Singapore, which has offered to host four of the ships. The Freedom will return to the U.S. in late 2013 or early 2014 after a 10-month cruise, and the first ship to be regularly operating from the island state is likely to be the Fort Worth (LCS 3), second of the Freedom-class.

The Navy has said it does not wish to mix both classes of LCSs in Singapore for this early effort, and aside from the Freedom, it will be 2016 at the earliest before enough LCS 1-class ships will be available to be based in Singapore.

But LCS 1-class ships are better suited to operations in the Arabian Gulf, Work said.

In the "Navy to Consider Buying Only One Littoral Combat Ship Design", what in your opinion is the most telling thing that Freeman is quoted as saying (if accurately quoted) that identifies him as thoroughly unqualified (no more or less than anyone else at POGO) to comment on the LCS program?

That quote, the one most telling thing that Freeman (if accurately quoted) say that identifies him as thoroughly unqualified (no more or less than anyone else at POGO) to comment on the LCS program is:

“It is hard to imagine two ships that do the exact same mission looking more different,” Freeman said. “Those differences go well beyond appearance and will be costly.”

If these were single-mission ships, they might possibly look more alike, but the diversity of missions and associated requirements without prioritizing one well above the others logically creates a broader design trade-space to meet those diverse requirements.

The diversity of relatively equal design requirements allowed resultant designs to be divergent. If the two that were selected seem surprisingly diverse, you haven't seen all the contenders. 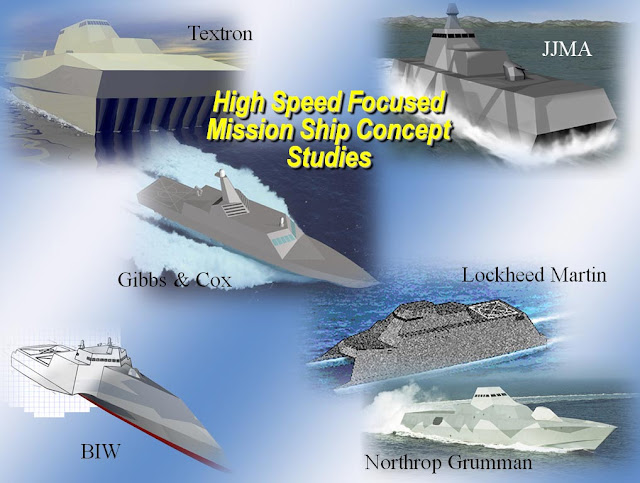 More than just having planform/shape divergence, the designs clearly differ in approaches to accomplish the same objectives functionally.

From the KPPs, we can tell an awful lot about the breadth of the design trade-space and use it to perhaps interpret why the competitors chose different paths. High speed/Long Range seems the 'tough' requirement, and Austal has a long history of high-speed multi-hull designs, so their attraction to this contract was obvious. There are very few ways you can go 40+ knots fast for any distance with a shallow draft vessel, and I think all of them may have showed up in competitor's designs, so what we see in the remaining two are just the survivors. There is really no surprise there. The rest of the KPPs, the competitors could decide upon freely. 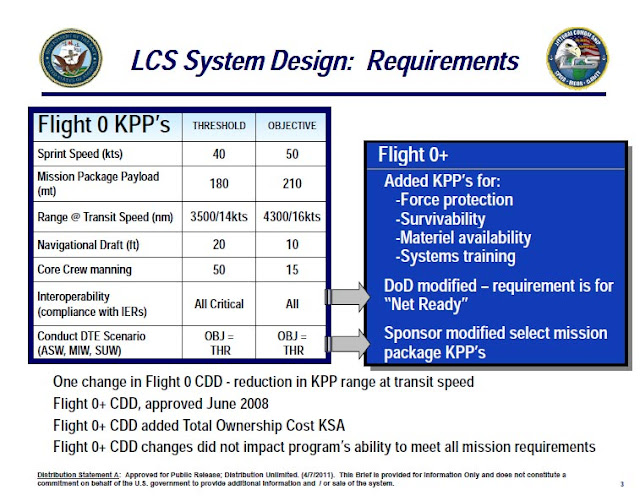 If Competitor A decided "Conduct DTE Scenario" at the threshold and Interoperability would require more Core Crew Manning, that would affect the treatment of living spaces more than otherwise. If they decided the hull volume for mission payload was important, they might accept more 'Draft'. And so it goes, on and on in weighing every requirement.

If you are mathematically inclined, designing against requirements is akin to simultaneously solving multi-variable equations via matrices manipulation, only you get to pick your x,y,z-etc values within a range for each and your professor doesn't know what answer is 'right' until he sees it. The more diverse the requirements, the more variables you have to deal with.

If you are not mathematically inclined, it's like catering a family reunion such that everyone is willing to eat dinner.The more relatives, the more variables you have to deal with.

Sorry about the long update: I may break this out tomorrow as a separate post

My options to up-gun it to my min standard:
1.Replace the 50 cals with a stabilized mk51 MAWS that can be upgraded to a M230 is needed.
http://www.dtic.mil/ndia/2010armament/TuesdayLandmarkAStevenCannon.pdf

2. Remove the POS mk44 Bushmaster (way too slow and takes up too much room) and put Millennium Guns on either side of the SeaRAM launcher. These will act in the secondary cannon & CIWS role.
http://www.navweaps.com/Weapons/WNGER_35mm-1000_Millennium.htm

3. In place of the mk44, put a popup armored Hellfire launcher (4 or 6 cell). Each Hellfire can be replaced with 4 DAGRs as needed. Laser designators can be put on the mk51 mounts (from #1) or standalone units can be used for guidance.

This should provide a nice & lethal layered defense and decent offense out to ~25km with very little developmental risk due to mostly mature systems. If you want oomph farther than that, put armored NSM or Harpoon launcher forward of the bridge ala the "International Variant"

I was just thinking.. Instead of a 6 round Hellfire box launcher per side, replace the inner two cells with a larger cell for a 19-round 2.75 rocket pod.

Also, put 4 EODAS (from the F-35 program) sensors on the mast to provide 360 IIR coverage around the LCS.

I haven't thought too much on armament because of the Navy's focus on mission packages that involve a lot of remote (and therefore indirect) force application. One of the things I actually like about the program is an unwillingness to tie the ships down to any weapons/sensor configuration before they (Navy) really figure out how they're going to use them. This approach has the added advantage of driving the usual suspects batsh*t crazy: they can't complain about what isn't there, so they have to focus on trying to convince people using the 'it doesn't work - waste of money' BS.
As to configurations, I'm leaning towards favoring the LCS 2 design for a lot of the reasons similar to what you mention. What I'd like to know is how they compare from the survivability POV. The LCS 1 is supposedly more maneuverable (a plus for susceptibility considerations, but the Tri-hull of the LCS 2 has to be a big plus on the vulnerablity side of the equation. This is the kind of 'diversity' that actually has benefits.

Modularity was a key feature in deciding the weapons package I proposed.

2. The Millennium Gun has no "thru-deck" footprint and can literally be bolted onto any open deck space ass needed.

3. Hellfire launchers can use a wide variety of missiles from the original Hellfire, to Brimstone, to JAGM, and any of the 2.75" rocket (guided or not) family.

4. The Spike NLOS is there to replace the canceled NETFIRES. IMHO the Griffin is a poorman's replacement with nowhere near the required range.

The nice thing is that these can be added in stages. For a start, replace the mk44 with the Millennium Gun and replace Spike NLOS for Griffin.

Then move the Millennium Guns aft and add the Hellfire launchers.

On the issue of maneuverability, what small difference there is cannot make a significant difference in combat . Do they expect them to be playing chicken with SBS attacks?

As a parting thought, the Millennium Guns can also take on CWIS duties that includes MLRS and mortar attacks. The SeaRAM cannot do that.


btw, Your blog went dark today for a few hours, what's up?

RE: Going Dark.
Have no idea. Found out about it when I tried to login from my phone to comment at Solomon's (SNAFU). Got a notice of Google shutting it down for 'suspicious activity'. The only thing I saw was a huge spike in the traffic counter. Could have been anything.

They don't have anything close to the same level of internal compartmentalization or DC capabilities of even the FFG7.

I don't see how building ships before we know how we want to use them is any way to run a program. At least not in the numbers planned for the LCS. Build a few, maybe. But commit to, what, 27 before we even know if they are good at anything other than going fast? Seems just plain dumb to me.

Oh and dump the speed requirement. It places too much emphasis on exotic hullforms and over-engineered propulsion plants at the expense of range, endurance, payload and survivability.

Hi Smitty
RE: "Survivability". this was one of POGO's BS claims that the Navy responded to already and I documented when I took down POGO's lame arguments in http://www.elementsofpower.blogspot.com/2012/05/project-on-government-oversight-still.html
As to the rest, think of one ship as part of a larger system, and you see where the Navy is going with this. They know what they want to do with the ships, they're now working on 'how' they want to do it befoer they spend the bucks to put the capability into the modules. Operating in the fleet will give them the insight they need ahead of spending $. I like the whole many seaframes and module approach as a force multiplier that also trims total logistics down times. We're fortunate in tha tthis is such a new approach that the Navy has been quite vocal all along on what they're doing, and the history is well documented.
If you've got Powerpoint, See http://www.google.com/url?sa=t&rct=j&q=lcs%20conops&source=web&cd=2&ved=0CFMQFjAB&url=http%3A%2F%2Ffaculty.nps.edu%2Fjekline%2Fdocs%2FLCS%2520CONOPS%2520brief%252011-15pt1.ppt&ei=XxvBT_aBA87hsQKetcj0CQ&usg=AFQjCNFIZBmLdyBGusxDb184DRHIvVwjMg
for a good brief on how the LCS concept was created. and see http://www.google.com/url?sa=t&rct=j&q=lcs%20conops&source=web&cd=1&ved=0CFEQFjAA&url=http%3A%2F%2Ffaculty.nps.edu%2Fjekline%2Fdocs%2FLCS%2520CONOPS%2520brief%252011-15%2520Backups.ppt&ei=XxvBT_aBA87hsQKetcj0CQ&usg=AFQjCNG1_jywZpaCnK8IdgZYaQCZCFVtNw
for a brief on the CONOPs. Use Notes Pages view to get more interesting discussion of whats going on with the slides.