You can be ignorant of the fact that something you believe is a myth. No problem.

What you shouldn’t be able to do is recycle old tropes as if they were fact, in your manifest ignorance of what you are attempting to write about with impunity, but it is done way too often these days concerning Defense in general, and Low Observability specifically. To foster myths as a ‘journalist’ is perhaps typical,  but it is disturbing. And that goes double for an ‘Editor’. You want to write about things? Fine Sydney. Just pick a topic you know something about.

Freedberg, fresh off of having to backtrack ‘big-time’, undone by his mad skillz with creative headlines, is back today with a new ‘piece’ titled “Lockheed Dismisses $1 Trillion Estimate For F-35 JSF”, just couldn’t resist opening the ‘red meat’ section of his post with the following (emphasis mine) :


Stealth aircraft are notoriously expensive to maintain, with the radar-absorbing coatings on the B-2 prone to disintegrate in the rain, but Rubino argued that F-35 is a different animal. "We have learned a whole lot over the last 20 years as far as maintaining stealth," he said. "We built this airplane to be able to have very robust stealth, to the point where you can ding it, you can scratch it" and it does not lose its radar-evading properties. Even if you dismiss Lockheed's claims about F-35's maintainability, there are still serious questions about…[blah blah blah] 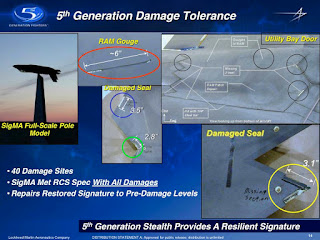 The F-35 LO design IS completely different (see slide to left) from all other systems, and the ‘maintainability headache’ aspect of LO systems from B-2 onward is another myth for another time. But the “radar-absorbing coatings on the B-2 prone to disintegrate in the rain”  crack is a pure myth that can be exploded easier than most.

The Source of the B-2 Coatings ‘Disintegrate’ Myth

The myth comes from the fusion of the wording in a 1997 GAO report, and the anti-B-2 crowd’s willful misrepresentation of same (OK we’ll give them the credit for merely being illiterate). If one does a roll-call, one will find many of the same Illiterati making the most noise over the F-35. One name on both lists is the source of much of the B.S. found in Freedberg’s article. (Not naming names, but his initials are “WW”). I leave the reader to draw their own conclusions on that point.
The GAO report In question was “B-2 Bomber: Cost and Operational Issues, GAO/NSIAD-97-181 August 1997. The offending passage usually cited (if any are cited at all) in claiming the myth is that the B-2 ''must be sheltered or exposed only to the most benign environments -- low humidity, no precipitation, moderate temperatures.''

What the journalists back then NEVER mentioned was the DoD response in the SAME REPORT:

Notice the reference to the ‘Block 30’configuration? In the report elsewhere is this little observation:


The Air Force is currently testing the B-2 and plans to complete the production program, including planned block 30 modifications, by July 2000.

This was an August 1997 report. The FIRST Block 30 aircraft was delivered on 5 August 1997. Block 30 was the final production configuration, and the final configuration wasn’t even fielded yet.
the GAO was basing it's guesses on stale data (again) on interim designs.
The GAO got the last word in commenting on the DoD response (Emphasis mine):


Design requirements for the B-2 include provisions for the B-2 aircraft to be deployed, without shelters, in all types of temperatures and climates. The operational test report for the interim B-2 concluded the B-2 must be sheltered or exposed only to the most benign environments (low humidity, no precipitation, moderate temperatures). According to B-2 Combined Test Force officials, permanent shelters at deployed locations are required. Therefore, while DOD commented that it is possible to deploy the B-2, it appears that effective operations from a forward operation location will require additional facilities and equipment not included in the original plan. The Air Force is still working to identify these additional requirements.

Yes. My goodness. Shelters are required because you can’t do body work or paint in the rain or high humidity. Go to your nearest Auto Body shop and ask them if they think this is worth mentioning. Aside from the passage being somewhat inaccurate in itself (different materials will ‘like’ different temps and humidity) you will also note there is not one, single, solitary, indication that the coatings “will dissolve in the rain”. THAT leap in logic sprang from the febrile minds of the anti-defense left and naïve isolationist/ peaceniks who then spoon-fed it (like SO many other myths) to their fellow-travelers: the all too willing 'Journalistas'.
Think about the “B-2 Rain Dissolves B-2 Coatings Myth” the next time you read something unofficial about the F-35.
EPILOGUE: So how’d the Block 30 B-2 do? Haven’t heard a thing about melting B-2s since 1997 have you? Air Force Magazine 1998:


Two B-2s deployed from Whiteman AFB, Mo., to Guam for a 10-day exercise in March and April. They achieved a 100 percent sortie success rate, flying almost 90 hours during the exercise. Because of recent damage to hangars at the base, one of the B-2s had to be left outside, exposed to the weather, which included driving rainstorms. The Air Force said that most maintenance, including that of low observables coatings, was performed outdoors. A spokesman for the 509th Bomb Wing said this "shot a hole" in the wild news reports last year that the B-2's stealthy coatings melt away in the rain.

Yet the 'myth' persists because the Luddites wish it so.
Posted by SMSgt Mac at 00:02

hi,my name is Nuno and i am from Portugal.I have been following your blog for some time now.Sorry for my bad english...I agree whith what you are sayng.It s unbeliving why so many people are against the VLO techn.whem it has keep western pilots (esp.those of the usaf)safe in various missions.NATO only achieve many missions because us stealth planes cleared the way for 4ºgeneration planes to do their job.The constant atacks on the JSF can only(in my opinion)have political origins (or born from the ignorance of people).Just one question:do you belive the US should keep todays bomber fleet past 2040 or do you agree that a new bomber is necessary in the 2025 time frame?Is it possible in todays economical crisis or should the USAF concentrate their efforts in the f-35

Hello,
I believe a new long-range strike system should be fielded as soon as possible. Unfortunately, I suspect under the false flag of 'affordability' all indications I've seen in the press are that the weapon system in development will fall several thousand nautical miles short of the proper definition of 'long range', and perhaps be 'light' on payload. The last problem can be worked around with advancing munitions technology, but the minimum range for any system to be able to attack any target from multiple directions is ~6000 nm plus 2X the safe refueling distance. Anything less will leave potential targtes out of reach (unless we develop low observable refueling methods.