I'm reading this month's Flight Journal, and you'll never guess who's penetrated the defensive positions of the editorial gatekeepers.This issue contains the rather nonsensically titled article 'Do We Really Need a Perfect Fighter?' (Talk about a question no one is asking). 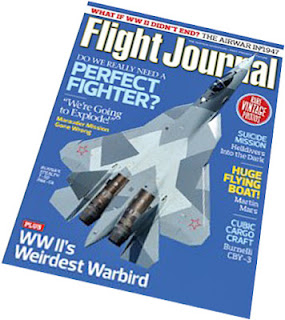 I couldn't believe what I was reading, so I went to their website to get an e-mail contact, but found the opportunity to comment at the site itself. My comment as of this writing is awaiting moderation, but for the record, I posted:


Just picked up this issue at the Carswell BX, and thumbing through this article I saw the 'barf boxes' accompanying the photos. My first thought was: who wrote this (ahem) 'stuff'? By the time I got to the blurb claiming the F-35 has the lowest highest wing loading of any modern fighter, I knew who the author had to be.

Odd thing though. The wing loading of the F-35 isn't public knowledge, and since the fuselage provides lift, you can't simply divide weight by wing area. And now having read the whole article, I'd say the wing loading trope is among the least of the offenses committed.

Can you guess who the author might be?
Would it help if I mentioned that within the article, among other delightful bits, he wrote "The latter underscores what Australian analyst Peter Goon terms the “BVR paradox”—the reality that modern BVR combat imposes higher performance demands on fighters than WVR combat does" as if Peter Goon was some disinterested party and not the long-time and close associate of the author that he is?

A portion of the article, with the authorship of same and opportunity to comment is to be found at the Flight Journal website here.
Posted by SMSgt Mac at 21:22

Ah yes, our "beloved" Carlo. I love his attempt at re-writing history. Actual history shows that NATO roamed at will over Bosnia / Serbia and annihilated every aspect of their IADS that could prevent or even slightly hinder their mission. That a veritable handful of systems with no capability to hinder the NATO mission survived, is hardly a sound basis for assuming that future operations will follow the same path.

Yet it's good enough for our favourite mobile phone expert...

It's also interesting that it's not the capability of the system that is important to the Dr, but rather the TTP's of the operators that made the difference in whatever combat effect the Bosnian/Serbian IADS achieved, yet when it comes to aircraft it's the complete opposite.

Training, tactics and procedures are irrelevant and it's all down to wing-loading and thrust to weight comparisons that determine air combat...

The man is such a joke. He must work cheaply though...

Aussie, Serbia was a country falling apart and a had lousy IADS to begin with. And please remember that they were able to shoot down a F-117, and damage another after NATO destroyed their IADS.

The Serbs had a very competent, albeit older IADS system that, more importantly, was operated intelligently using lessons learned from watching our performance in Desert Storm. One reason we dropped bridges on the Danube was to discourage 'someone' from barging a double-digit system int Serb hands to make sure the IADS didn't get any better than it was. There are also certain B-1 aircrews I know of that are thankful they weren't any more competent. Serbs employed many of those types of radars that the more vocal detrators of 'Stealth' swear up and down that LO aircraft are most vulnerable to their use/frequencies. The F-117 shootdown probably involved much more than the 'technology', and far more of the tactics and ROE half of the 'Stealth' equation, with, IMHO, some rat-faced subversives thrown in to boot. See: http://www.airpower.maxwell.af.mil/airchronicles/apj/apj02/sum02/lambeth.html for a pretty good after action summary. It should be noted that the 'other' LO platform not only took out one of the most problematic SAM operator the Serbs had, but at one time drove right over a popup SAM threat that never saw them. B-2 crews enjoyed the Serb and CNN claims of mass Tomahawk attacks because that told them the Serbs didn't even know they were overhead. As to the second F-117 gettng hit, I have found NO credible sources for those rumors.

Aussie Digger,
I believe one of the biggest points the anti-F-35 and/or LO in general crowd completely miss is the situational awareness advantage that LO and sensor fusion provide, and the impact of that advantage. they tend to look at systems as piece parts and not recognize the whole is greater than the sum. I also doubt they've ever done a fault tree analysis: They seem to be completely unaware at how modern systems are designed such that one part of the system failing does not bring down the whole system.

The Serbs got lucky that night. They fired on an unaware 4 ship flight of F-117's which were in the exfil stage of their mission.

The F-117 had no radar warning receiver capability and no warning of missile launch beyond the old Mk 1 eyeball.

The Serbs launched multiple missiles and 1x F-117 went down. The other 3 made it home, just fine. The "special device" often mentioned was never again able to achieve any sort of combat success, even against non-LO aircraft. "Special" indeed, or is that just the apt description for those who believe in such nonsense?

The Serbs were never again able to replicate this feat and neither has anyone else. As the good Sgt mentions, there is NO credible evidence that a 2nd F-117 was damaged by direct action from any Serbian unit and if that's the basis of some kind of claim that "stealth" isn't worth it, then it's hardly surprising that every country that can afford to do so, is racing to get as much "stealth" into their respective forces as they can...

"Stealth" doesn't protect entirely against an enormous quantity of lead thrown into the air and it's conceivable that a similar isolated tactical success may be achieved at some point.

In the meantime, we'll see thousands more successful sorties flown and plenty more "IADS" annihilated before another such "success" occurs.

I could not agree more. They also have a total sum of ZERO with respect to time on the "2 way range" and the good Doctor Kopp has not even a single second in the military service of any nation under his belt, yet proselytises at great length over what "combat" is really like and what is important in it...

The idea that it's a systems fight, not a platform fight, does not even enter into their thinking. The closest I've seen is the "remarkable" comment from Mr Goon that "systems do not a fighter make".

Perhaps not, but "systems a military force do make..."

If only they were capable of understanding that.

Totally agree the critics seem unable to wrap their heads around the "z-axis" as the authors of the paper "The F-35 and the Future of Power Projection" describe it. They stick with the traditional inside-the-box nit picking linear and limited analysis that only looks at "x-y axis" capabilities.