I seem to run into this problem every time I really seek to 'engage' over at Military.com

DODBuzz had their "Friday Red Meat" post up for the usual F-35 wailers and gnashers. One wailer,(really more of a gnasher) with the handle 'Torquewrench' spun an extremely poor analogy between buying a car and buying an airplane that I couldn't pass up. So I took the opportunity to tell a story myself, only a non-fictional one about how combat aircraft are REALLY bought and why.

The response was as expected, with 'T-wrench' and another taking the challenge.

So just a moment ago, I sat down to dismiss the arguments presented. For SOME reason, my first comment wouldn't take. I tried posting the various forms of the following as my first response:


RE: Costs and "That's the way we've done it, but that doesn't mean we've been doing it the best way"

If we don't want to build a system that is obsolete tomorrow,that is the ONLY way it can be done. What has affected the F-35 the most by far has nothing to do with any F-35 unique experience (there's been a remarkable lack of ‘requirements creep’ due to the pay-to-be-different rule among customers). What's driven cost projections most is Congress/DoD appointees stretching development and lowering the early buy numbers using the 'Concurrency' scam as a political expedient. Problematic for these projections: the actual costs-to-date correlate more closely to LMs projections than the CAIG’s.


the first time I received notice that the 'administrator' had instantly deleted my comment. 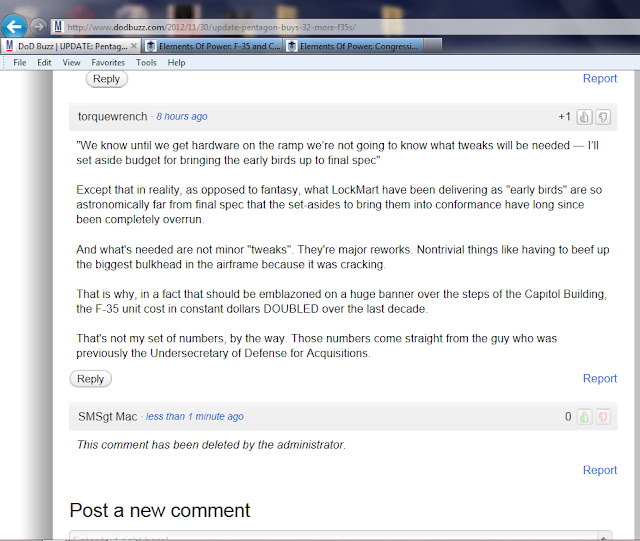 I tried again, first looking for any words like 'cockpit' that their filters (on a DoD topic site, really??) don't approve of. Nothing, but I rephrased things a bit and tried again: 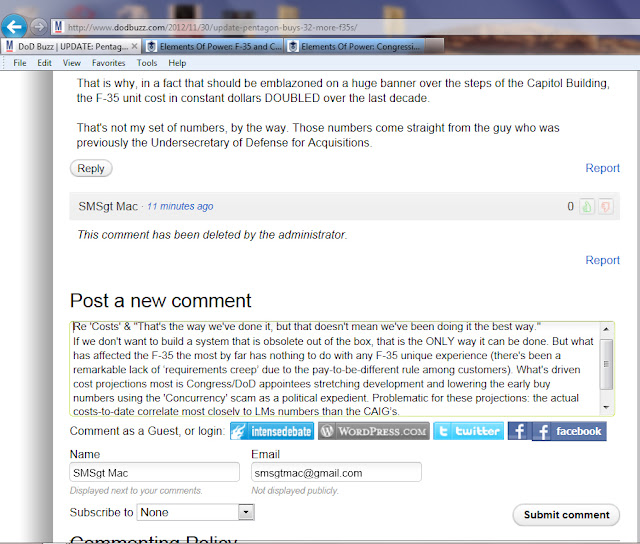 And I got the same result. I tried again, carefully trimming, reviewing and organizing. Same result.  So wanting to try something different I posted:

Either the 'administrator' finds counter-arguments to the F-35 doom patrol unacceptable, or his filtering system is too tight.

Of course, That gets through. So I try a 'good faith' fourth time: 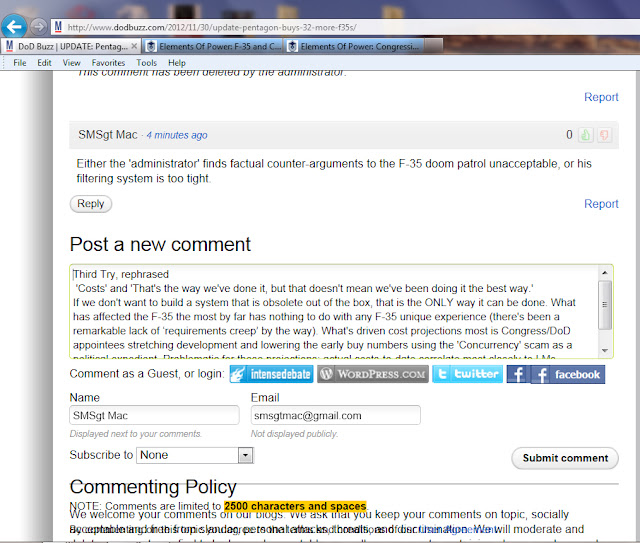 Which of course gets me the 'administrator delete' response again. 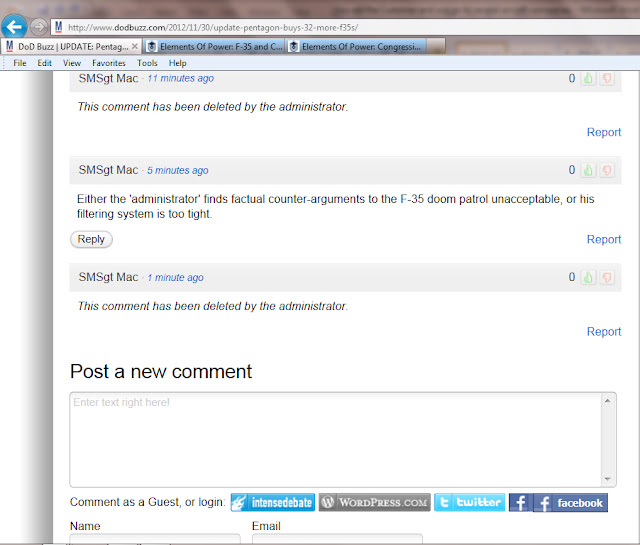 All the while, F-35 critics seem to be getting Cart Blanche in posting content. Unintentionally or not, and because my short comment got past the filters I'm leaning towards 'unintentionally', DoD Buzz is aiding and abetting the propagation of falsehoods and hysteria with their current comment system.
Posted by SMSgt Mac at 10:31