As chance would have it, yesterday was my Texas Concealed Handgun Law training course and qualification.  Two nights before, I was studying the latest Texas CHL manual online, and wincing as I went over the parts that delineated the 'gun free zone' areas, and thinking, in the wake of the Oregon mall shooting, in most cases it is pretty stupid to create what is actually a 'target rich environment' zone for the sick and twisted who would try and commit mass killing of innocent others.
While the rest of my family spent the day trying to avoid all the 'news' and constant revision thereof, concerning the elementary school killings that happened the day before, one of the first things we covered was WHY Texas was a CHL  'shall issue' state. Surprise! It was largely the result of  a mass killing, the Luby's Cafeteria Massacre on October 16, 1991, in Killeen, Texas, and the efforts of one of the survivors, Suzanna Gratia Hupp. Ms. Hupp's story and energy in making the laws more protective of the individual was a powerful weapon. Her testimony before Congress even managed to subdue the perennially pompous a** Chuck Schumer for a time:

Time will tell if Chuckie starts bloviating again as if the above never happened.


This was my Target and Scoring Used

Texas uses the B-27 target for qualification: 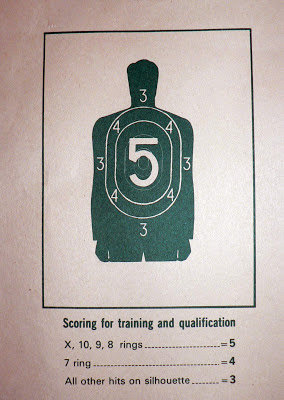 This is the Course of Fire:


This was my 'grouping': 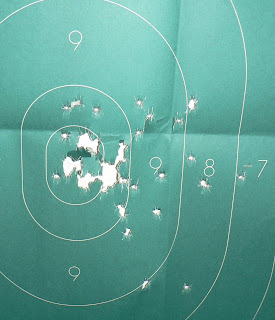 IMHO, not bad, especially since the 50 rounds represent about a fifth of all the rounds I've put downrange with this weapon. I've decided it shoots a 'tidge to the right and will be adjusting the sight appropriately.

This was my 'score': 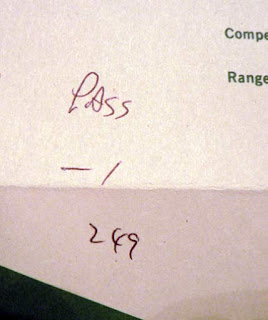 Texas only records Pass/Fail. The 249 out of 250 only serves to make this shooter cry in his beer. 'Dang! So close...'.  I took comfort in acing the written though.

The above is an example of  'Gun Control'

BTW, Have you heard? Evidently the Oregon Mall shooter only shot two people before he took his own life BECAUSE he was confronted by a person licensed to 'concealed carry'.
Posted by SMSgt Mac at 12:46

In Pennsylvania it's right-to-carry. All I had to do was pass a background check by the Sherrif's office and I was good to go.

I like the idea of how it is here but I do think there should be a mandatory class like the one you describe. It scares me how many people here may have a gun on them and ZERO idea how to use it.

I like most the fact that there is a timespan between the training and issuing the license driven by the processing and steps taken. It gives me time to practice in the field things I have to develop into habits before I start carrying, and allows me to 'what if' and research any grey areas I might have after the class. Before the class, even having read the CHL handbook, I didn't know enough to ask myself the right questions. I think one of the things that makes Texas CHL requirements so palatable however, is the fact ANYONE who can legally own a handgun can keep a loaded one in their vehicle as long as it is concealed from sight. There are other rules of course, but I find them very logical and reasonable.