At least it seems that way.

If the F-35 is 'plagued' by anything, it is plagued by critics who haven't a clue as to how Airframe Durability testing is conducted, what its objectives are, and how it fits into the modern aircraft development process. It seems this ignorance 'dooms' the F-35 program to an annual round of misplaced and sneering derision by people who have no idea they are broadcasting their own ignorance after every DOT&E report release.


Amusing as it is, such unwarranted criticism is counter-productive. I could produce a lengthy dissertation (you know I can) on the history and benefits of this kind of testing, and show how the developments to-date for the F-35 are no different than the programs before it --except for the F-35 doing it perhaps better and in a bigger fish bowl --but that would bore the cr*p out of most people.On top of that, the unrepentant anti-JSFers would only claim I was making excuses or some other equally stupid assertion. So I will default to providing an illustrative example of what I mean. Consider the following passage concerning the EARLY F-16 development (Queen's English BTW).

In parallel with the flight-test programme a series of ground fatigue trials were carried out on the fifth development airframe. A test rig set up in a hangar at Fort Worth used more than 100 hydraulic rams to apply stress to an instrumented airframe, simulating the loads imposed by takeoff, landing and combat manoeuvering at up to 10g. By the summer of 1978, this airframe had clocked up more than 16,000 hours of simulated flight in the rig. These tests were carried out at a careful and deliberate pace which sometimes lagged behind schedule.

As the tests progressed, cracks developed in several structural bulkheads. News of this problem resulted in hostile comments in the media, but GD pointed out in its own defence that the cracks had occurred not in flying aircraft but on ground test specimens. If the risk of such cracks during development testing was not a real one, a company spokesman remarked to the author at the time, no-one would be willing to pay for ground structural test rigs. GD redesigned the affected components, thickening the metal, and installed metal plates to reinforce existing units. 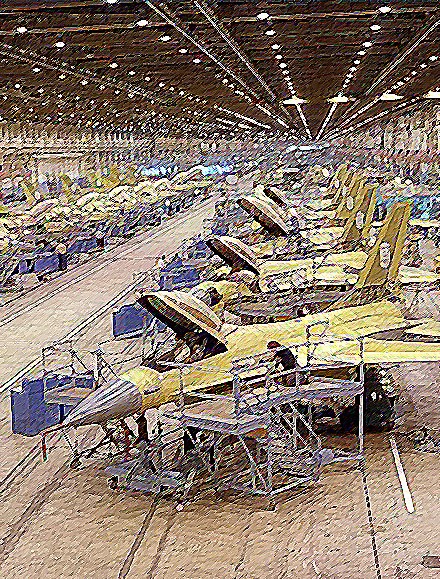 I was tempted to employ some trickery to deceive the reader into thinking the above was written about the F-35, but I think this point is better made straight up.  Even after this testing, because the F-16 was initially the ultimate knife-fighting hot rod of a dayfighter, there were useful-life 'issues' on the early airframes. Pilots were flying higher G-loading at several times the rate as previous fighters and higher percentages of the time than that for which the airframe had been designed.
Posted by SMSgt Mac at 22:49

Hi Nuno,
Nope, not the aircraft. If the DoD wanted to field the first several hundred with only dumb bomb and Sidewinder capability and little else, they could have done it just as fast as the F-16. (See my 16 February post). I'd say well over half the 'delays' have been CHOSEN by the Customer in the supposed pursuit of technical risk reduction, and in the process induced greater programmatic risks. About 50-70% of the rest were induced by the Customer when decisions made between the X-plane and the F-35 design configuration decisions were made and drove the weight reduction effort. (as an aside, for years critics of the B-2 b*tched about a delay in the development that in the end was shown to have been caused by a major government requirements change to add on a 'low level' mission requirement. I had to listen to moron journalists and Reformers carp about what they imagined in their own little heads for years.) My assertions in regards to delays, I've noticed, have never been credibly challenged. My question to anyone is: Why do you believe the people with no practical knowledge of the program more than those with the knowledge and background?

Thanks for your anwser.It is allways good to hear bought sides of the question.
But:
«Nope, not the aircraft. If the DoD wanted to field the first several hundred with only dumb bomb and Sidewinder capability and little else, they could have done it just as fast as the F-16»
These where the basic weapons of choice of the USAF in the early 1980s.The F-35 will have the IOC with the AMRAAM,JDAM and Paveway only...todays basic weapons that even a KAI FA-50 can use...nothing cosmic.Its actually a very similar situation to the early F-16A but 33 years later.
Also notice that the Viper beat the Jaguar and the F-111 in that competition...and scored a record...seven year after 1st flight...could the F-35 do this today vs the Eurofighter and the Strike Eagle?

RE: Also notice that the Viper beat the Jaguar and the F-111 in that competition...and scored a record...seven year after 1st flight...could the F-35 do this today vs the Eurofighter and the Strike Eagle

The F-16 was the first fighter-bomber the US had that was able to deliver iron bombs without a lot of restrictions on what it was doing at the time. The F-16 was the first one that could put the cross-hairs on the target and then be pulling away off the target and the computer could calculate when to release the bombs after the pickle. These days, GPS weapons make everybody a marksman, but the better nav solution you give the GPS munitions, the better the accuracy. I doubt if it makes much difference what drops it in competition anymore. I tested PGMs In the 80s and early 90s that were so accurate they were more accurate than our instrumentation used to measure the terminal accuracy -so accurate the atmospheric heat distortion between the cameras and the target could not see any variation off target, we had to look at what was left of the target and make an estimate. Now in a combat environment, the F-35 will do better and have a much better chance at getting to do it more than once. I'm looking forward to future Red Flags.