The results of the investigation into the June 2014 ‘friendly fire’ B-1 incident is out.  Read the summary here. I’ll wait until you get back…..

If you bothered to read the comments, you saw it sure didn’t take long for the morons to start twisting the results to mesh with their own stupid little beliefs held in the vast emptiness of what outwardly appears (to the unsuspecting) to be human heads sitting on their shoulders.

In the first FIVE comments, on this article reporting on the findings, only one, made by a person named ‘Joe Hardy’, managed to make a cogent, if terse observation as the second commenter:

The JTAC may not have been up to date on the latest B-1 capabilities, in part because its relatively newness and the experienced JTAC might not have worked with a B-1 with this capability before or with any frequency, but Mr. Hardy's statement at least looks towards where the problem in this chain of events was: on the ground.

The guy with ‘firsties! Honors’, one Chris Smith, managed to conflate who did what out of the gate:

Yes Chris, you do need to “get this straight”…. and fast. Re-read what you wrote and see if it makes any sense to you the second time.

The B-1 crew told the JTAC and Ground Commander they could not see the IR strobes. The guys on the ground did not process that information correctly. This wasn’t about what they did or didn’t know, this is about confusion in the heat of battle leading to someone on the ground giving direction to the B-1 to bomb the wrong spot.

The on-scene Commander makes the call, the JTAC is supposed to make sure the on-scene Commander and CAS assets get the information they need to make the call and deliver the ordnance. No doubt the splintering of the commander’s forces without his or the JTAC’s knowledge was a serious compounding factor in the confusion. It could have even been the key link in the chain of events that created the confusion, but in any case it had to have contributed to the tragedy.

The B-1 put the bombs right where it was told to put them. It wasn't the choice of aircraft, or the aircrew's fault. Got it straight now? Well if not, read on.

The third commenter was the delightfully named 'Jerry Barker':

Jerry makes unsupported assertions and allusions, implying what he apparently perceives to be a deficiency in the B-1 or any aircraft that depend on “pods”. He also apparently operates under the mistaken belief that the A-10 would not have had ANY comparable problems in performing the same mission under those same conditions.

He assumes too much.

We cannot positively state that an A-10 would have been able to even DO the job under the conditions at the time. All we can say is that perhaps an A-10 driver might have been able to see the ‘IR beacons’ once he got within the range of his NVGs, but that would only be IF he could have discerned the general battlefield.

If an A-10 wasn’t carrying a Sniper pod, he would have had more difficulty using those same NVGs (and/or other targeting pod that are nowhere near as proficient at that task as the B-1’s Sniper pod), to even get into the position to where he might have seen the IR strobes, AND be able to figure out where most of everyone else was (remember, not even the ground commander knew his guys had split up).

The sun had set just before the B-1 arrived on the scene, and over an hour before the B-1 made its pass. This can be a bad time of day for visible and IR light contrasts. Was it on this night? What was the weather like? Was there haze? Dust? Clouds?


The waxing moon was a little more than half-moon, and would have been approximately half-way to apogee. This could have meant deep shadows (mountains remember?) were present that would have created contrasts that might play more hell with NVGs or any targeting pod with less capability than a Sniper Pod. Even if the A-10 had a Sniper Pod, unless he was at the same altitudes as the B-1, the scene would have been more difficult to assess.  Since there is only one set of eyeballs in an  A-10, the pilot would have had to spit his time between flying the plane, talking to the ground, and looking at his sensors.
The B-1 crew can use the sensors more effectively and manage the workload better. All they need is for someone to give them the right coordinates.


The fourth commenter was a ‘Michael Murphy’:

Less ardent and more succinct in his stupidity than Jerry, but every bit as thoughtless.


The fifth and final dipsh*t is one ‘Mister’ Curtis Conway:

Says the guy with no CAS aircraft design, development, or employment experience. His comment is more ‘Murphy’ than ‘Barker’….he’s just more self-assured in his stupidity.

I’ve not bothered to make much effort to slap him around in response to the usual tripe he manages to post with regularity (and with that same ‘qualifier-free' declarative style seen above) at sites I frequent.

I may have to change that.

If anyone who reads this is on Facebook, feel free to share this far and wide. Point out that these D-bags made their stupid little statements without consideration for the well-being of the survivors (those who were involved in the mistake and those who weren’t) AND without consideration for the family and loved ones of those that were lost to this tragedy within a tragedy we call ‘war’.  Tell these sad losers to go vent their misplaced ‘outrage’ on the back of something less sacrosanct than the deaths of good men in a hard war.

Just in case some of this stupidity tries to get flushed down the memory hole, here's a screen cap of the thread at the time I excised the comments presented: 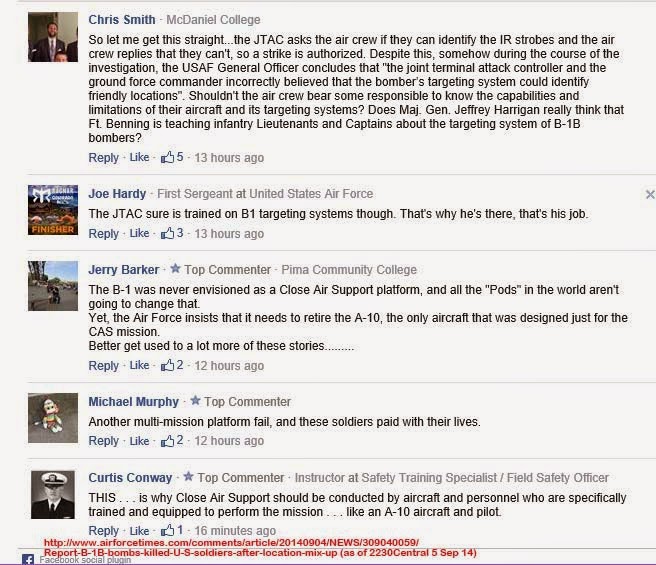