What do ALL of the following companies have in common?


We see ‘name’ pharmacy companies, and brick-and-mortar retailers as well as online retailers. We also see leaders in IT/Communications and beverages. Getting into more details, we also see two of the largest big-box home improvement retailers, a grocery company, an insurance company and a shipping company.


So what could all these companies all have common?


All 16 of these companies make up a little more than one fourth of the fifty-eight 2014 Fortune 500  Companies that individually took in more revenue last year than the largest defense contractor in the world. Yet, I doubt until recently most would ever see a book cover about those companies even remotely similar to this one.
I presume the emboldened 'Occupiers' and 'Swampy-types'  who have thrust boldly upon the mainstream these past few years will have published a few anti-capitalist screeds about their least favorite company (Wal-Mart or Exxon I suppose), but they're a bunch of Johnny-come-latelies to the demonization game and not yet an establishment themselves (Soros will probably die of old age before they will be able to stand on their own).

This relative ranking of the biggest defense company (Lockheed Martin of course) to others in other industries is only the first indication that a ‘Military-Industrial Complex’ that Eisenhower feared might come about NEVER happened. It is evidence that the fear-mongers that propagate the MIC myth are merely opportunists touting cartoons of Eisenhower’s fear as a bogeyman. They use this bogeyman to manipulate the opinions of the chronically ill-informed and/or ideological fellow-travelers.  IMHO their faux ‘outrage’ is invoked only to satisfy their own subversive, and rather pathetic, wants and needs (as I will go into further in a near-future post).

Coming Soon: the 2014 Edition of “What Military-Industrial Complex?

A word of advice to those who might be tempted to prematurely chime-in. Avoid ‘yes-butting’ commentary to this post, lest you find your ‘but’ argument readily dismissed in the next post.

Here's a bit for further rumination in the interim: 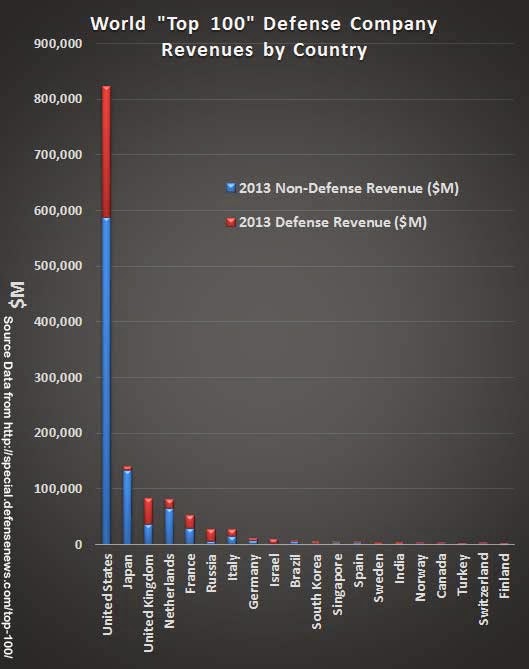 There's some nuances shown AND missing in the above. I'll cover it all when my Mythical MIC post is published.
Posted by SMSgt Mac at 19:11

I was just looking into President Eisenhower's speech a few days ago were he says.

"We annually spend on military security more than the net income of all United States corporations."

Now Exxon is 82% of the Pentagons budget and Walmart is 79%.

Good comment.
Yeah, that line caught my attention the second time I looked at the mythical MIC. It sounds oh so compelling...until you think about it, Eisenhower was comparing the spending for an ambiguously broad 'national security' cost against the mere NET income of corporations in '61ish? So what? one is a category of economic activity, one is a subset of a line item within an economic category...Grandstanding to make his point more vivid. I'll be doing a little background on that line in the upcoming post.

This is interesting. Thanks for sharing!