Jerry Pournelle's 'abolish the AF crap' is bad enough (based upon some 'conversations' he once had and a selective picking over of Carl Builder's [1] Masks of War), but the uncritical regurgitation of the standard 'Army' A-10 fanboi theme was too much. 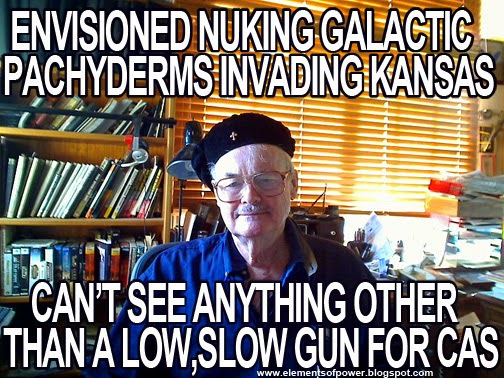 If you've read much of Pournelle's work, you'll often find a lot of brute force military action up close and personal (very 'Army'). So in a way this is kind of to be expected. But one would think an accomplished SF writer would have a little more imagination than having the AF keep flying low and slow in an obsolete aircraft, Pournelle strikes me now as just another old cynic without a clue.

I know where he could find one or two, but if he got this far (he's in his 80s fer cryin' out loud) without being able to conceptualize a near term future with a better way to perform CAS or understand the reasons for the different services, given how the recent advances in the application of force provide evidence that we can become more precise, lethal, while lowering attrition on the good guys, then there's little hope of little old me making the geezer see the error of his ways. I won't even go into his throwaway lines about unmanned vehicles, except to observe he hasn't a clue about where they are in their evolution and where they need to be to replace most manned combat aircraft.
I read all of Robert Heinlein's work that I could get my hands on until he had his near stroke and wrote that POS titled 'The Number of the Beast'. I waited for and picked up a copy the first day it was out. I was enjoying it until right in the middle it took a hairpin turn from soft Science Fiction right into pure effin' fantasy. Sorry, parallel universes are one thing--parallel universes with an Oz (literally) is another. I now suddenly find myself not interested in ever picking up another Pournelle work after this demonstrated lack of thoughtfulness much less imagination.


[Note 1] I'm a huge fan of Builder. His writings and analytical methods as well as his insight into many things was awesome--like a Glenn A. Kent without the military experience and extra insight, But he had blind spots like everyone else, especially when it came to the 1960s-70s Army.  I learned much about the blind spots (among many good things) from one of my mentors who worked with and was a friend of Builder pre-RAND: the late great Gene Ostermann (whom most have never heard of, but probably should have).
Posted by SMSgt Mac at 22:00

Dr. Pournelle is wrong. I have a lot of respect for him, but he's wrong on this. The infantry generals that run the Army aren't going to do the Air Force's job better than the pilots that run the Air Force. Those same pilots would probably do a pretty terrible job running infantry brigades, too.

People keep bringing this up but they forget history. There used to be a War Department and a Navy Department. Now there's only the Defense Department, with the four services subordinate to them. Everything is joint today. The Army and the Air Force work more closely now than they did during the Second World War, when they were technically under the same roof.

The entire DOD is under the same roof now.

Now, Jointness is a double-edge sword. I suspect that if the Air Force had been allowed to pursue an "F-24", that was just a replacement for the F-16, it'd be in service by now. But it was joint. It also had to be a naval strike fighter and a jump jet for the Marines.

I have a proposal. They always say, "give the A-10 the Army". I say okay. They can have the airframes and the TOs, but none of the personnel. All support contracts with the private sector have to be renegotiated. Oh, and the funding has to come out of Army Aviation's existing budget.

Think they'd be willing to sacrifice a chunk of their helo fleet for the A-10? It's real easy to wax philosophical about how cool something is when it's coming out of someone's acquisition budget.

The Air Force has a lot of problems. I experienced them first hand. I think they need to thaw out Curtis LeMay, Frankenstein his corpse bask to life at Area 51, and turn him loose to kick some asses. But thos problems aren't going to go away by merging the Air Force with the Army. That would be a trillion-dollar boondoggle that would make the F-35 look good by comparison. They'd spend billions just on new uniforms and changing the signs. In the end, this giant merged clusterfuck would be lucky if it got to the same level of capability as the Army and Air Force presently have.

Good writeup as always SMSgt Mac. I highly suggest you email this guy some of the things that you have written to see if ti can get through.

However, he might just not want to change his mind, regardless of the facts.

Hi Guys,
Yeah, I'm obviously not too impressed with Pournelle on this either, and some of it may have to do with his health so I'm not going to keep picking at him any more than it's required. He's got a good defense background that is pretty broad, but as he has also spent about all his time getting that background by thinking about defense--after he left the Army as a young man anyway--at pretty much the 50K-foot level, he's got little grasp of the nuts and bolts of the technology infrastructure he ponders. He co-wrote a little book once about "The Strategy of Technology" that I can't fault on concept. but I have a hard time dealing with it when it comes to details. For instance, he avoids reciting the TFX (F-111) myths on the one hand, but on the other hand he doesn't get it (the story) quite right -and in important ways-either. There's a world of 'big thinkers' out there that couldn't perceive a viable course of action to turn their big ideas into reality to save their souls, but seem to think they have it all solved just by pondering it in the first place: the "Policy Guys". Pournelle strikes me as a Policy Guy, and even though I probably agree with 90%+ of his politics and principles, his ideas for 'executing' same usually leave me cold. He may have a wonderful grasp of the human condition, but none at all about the state of modern military technology and their capabilities. One of the most frustrating things in dealing with people who think we rely too much on technology is that they tend to underestimate the degree to which what is important about the tech is the way humans leverage it. We KNOW the 'Ultimate Weapon is the Mind of Man' and we just work to give them the best tools for those minds to use. Most of the disconnect among people who disagree on 'defense' in good faith has nothing to do with doing either what's best or not -- it's about what's best in the first place. The Faux Reformer's major mission in life seems to be ensuring meaningful dialog about what is best never happens, and so churn out a lot of noise that even guys like Pournelle lap it up.
Well, I'm rambling so its best to quit while I'm behind. (Long Day)

Almost forgot. Yeah, powers in the Army have on more than one occasion made it clear they really don't want 'fixed wing' aircraft in numbers because the care and feeding requires significant fixed base operations and complex supply lines. The Army finds it ever so cheaper to place a claim on Air Force budget and overhead. Read Tolson's "Airmobility" http://history.army.mil/html/books/090/90-4/index.html, and enjoy the agonization just over the basing and drain on resources the Army had to deal with keeping their Caribou, the 'angst' over not being able to forward deploy them, and the ultimate transfer to the AF where they were forced to 'coordinate' with another service, yet had still to admit the AF did a good job in the end.