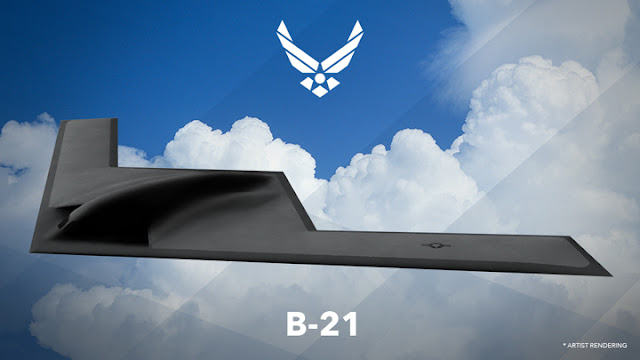 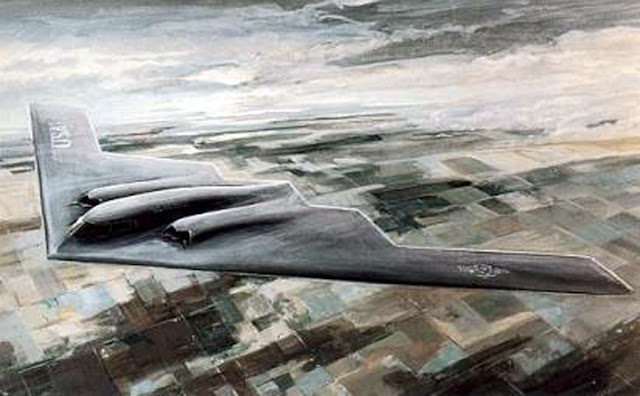 1. So much for all that cranked-kite speculation eh?
2. The conspiracy nuts are going to have a field day with the revelation there has been no prototypes built.
Posted by SMSgt Mac at 21:38

I remember getting a copy of that B-2 illustration in the late 80s from the Northrup booth at that year's Proud Shield symposium at Barksdale (along with a neat heat sensitive B-2 mug). that was the first thing that came to mind when I first saw the B-21 illustration as well.

The overall configuration looks remarkably similar to AARS-Quartz, and of course to the pre-redesign B-2.

Assuming that the design is optimized for med/high altitude (as AARS and the original B-2 were), this may reflect a strong statement of belief on the part of USAF that VLO and EW/EA are by themselves sufficient for penetration of a future state-of-art IADS.

(In comparison, the B-2 redesign for lo-lo reflected a hedge born by strong concern that stealth and jamming may prove insufficient against PVO modernization, necessitating terrain-masking tactics.)

interesting that it's a similar concept but if that is representative of the final shape there are some significant differences.

Meanwhile in Oz, there's been a senate inquiry into the F-35 purchase (yep another one). The usual clowns are out. Submissions available here for when you need a laugh - http://www.aph.gov.au/Parliamentary_Business/Committees/Senate/Foreign_Affairs_Defence_and_Trade/Joint_fighter/Submissions

Would love to read your journalism career obituary for Bill Sweetman.

Another nice article. Good work on your shack!

Thanks Don! Sorry about not seeing your comment earlier. I finally got the barn doors hung right and am sealing them off so I put some A/C in there to finish the sheetrock.