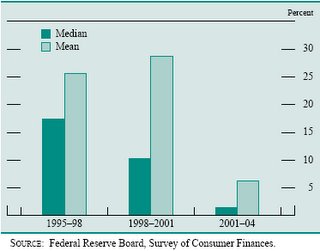 The Fed just released the findings of the latest (2001-2004) survey of consumer finances aptly titled: Recent Changes in U.S. Family Finances: Evidence from the 2001 and 2004 Survey of Consumer Finances.

Let me categorically state up front that it appears the Fed paid for generally sound methodology (a hallmark of NORC), and that reasonable care was taken in executing the survey. The survey’s limitations were properly noted in the report; and although most people probably wouldn’t recognize them, they should be obvious to those with the most interest in the survey.

The ‘bottom line’ finding of the survey is that between 2001 and 2004, the growth rate of the mean and medium income was lower than the previous two cycles. See chart above.

Fed Releases Survey of Consumer Finances Molehill, MSM Builds Mountain Range
(AKA: Thank goodness we have the UAE Ports non-scandal right now, or else the Left would have their phasers set on ‘Shrill’.)

Now that the findings have left saner realms and have entered the wilds, a Google search yields no fewer than 277 (as of 20:50 Hrs Central Time US) ‘news’ references to the survey. Among the first thirty items returned we find:

It looks like about 1 in 5 media sources resisted (this time) the dark side. Apart from the inability to tell a mean from a mode or a median, most of the MSM evidently can’t tell a 'lower gain' from a 'loss'. Or in some cases, if they had bothered to read the report at all, they would have seen the gain that was experienced, was already adjusted for inflation.

There’s some insight to the methodologies used in the study available elsewhere on the Fed website, but there is plenty within the document itself to keep me from drawing any kind of ‘negative’ reaction with the information that has been released. I have questions about some things that are not explained, but just going over what is explicit in the report should suffice in understanding my ambivalence. Here is a couple of examples:

First, much or all of the reduced growth, as seen in the chart above, could be explained by a single point made within the report (Page A2):

The U.S. economy was in a mild recession through much of 2001, and real gross domestic product was flat for the year. However, this pause in the growth of real GDP was followed by some pickup in 2002 and sharper gains of 4.1 percent in 2003 and 3.8 percent in 2004.

So we spent 2001-2004 climbing out of a recession. If one has any kind of memory at all, one would remember that most of that time being called a time of ‘jobless recovery’ in the press and by others. The jobs that would have raised the growth rate in median and mean income came later in the recovery. Continuing the same paragraph…

But if that isn’t enough to explain all of the ‘lower growth’, perhaps the following (page A1) is:

Several demographic shifts had important consequences for the structure of the population. The aging of the baby-boom population from 2001 to 2004 drove a 2 percentage point increase in the share of the population aged 55 to 64. Overall population growth was about 3 percent, and, according to figures from the Bureau of the Census, 58 percent of the growth was due to net immigration. Also according to Census estimates, the number of households increased 3.6 percent—a rate slower than the 5.5 percent pace in the 1998–2001 period—and the average number of people per household remained close to two and a half.

So we have significantly more people at retirement age during this last survey period than previously, and over half of our growth rate is from immigrants who traditionally fill entry level jobs at higher rates than the general population. These factors alone could account for most of the reduced growth. In my industry (aerospace) alone, we are experiencing a huge earnings (and brain) drain due to the bulk of the workforce reaching retirement age:

As noted by the Commission on the Future of the U.S. Aerospace Industry, "Statistics from a variety of sources indicate that the aerospace workforce is "aging" and that 26-27 percent of aerospace workers are eligible to retire by 2008. The average age of production workers is 44 in the commercial sector, 53 in defense, and 51 at NASA.

Aerospace is not the only high-pay technical area that has this problem, but to understand the impact of retirees leaving high-paid jobs just in the aerospace sector, consider this testimony made in the House of Representatives Committee on Science in 2003:

The aerospace industry is a powerful force in the U.S. economy, contributing over 15 percent to the Nation's Gross Domestic Product and supporting over 15 million high quality jobs

You read that right: One industry = 15% of the GDP. At my company, they started retiring in droves about 1996, and hardly anybody is staying longer than they have to. We can’t hire young engineers fast enough, and they don’t make nearly as much as the old hands in this “knowledge worker” industry.

There are some other things that could have inordinately affected the results of this survey compared to past cycles. For example, this time around the Fed treated company-financed pension plans differently. There is also the big unknown in the effects of oversampling the upper income group (due to much lower survey response rates) and how that might vary from cycle to cycle. And I want to now mention the obvious factor I have studiously avoided to keep things manageble up to this point: A little event called September 11, 2001 -- the full impact of which could not have been felt before the end of the previous survey cycle. Finally, if one wanted to split hairs (and if this was done by anybody but NORC I would) the whole idea of using a survey instead of a census would make this too suspect for concrete conclusions.

Read the survey report and the referenced materials. You will end up yawning over this ‘story’ as well.
Posted by SMSgt Mac at 21:58