I Find Your Lack of Faith Disturbing, SMSgt Mac! 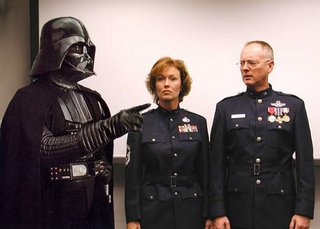 Hoo boy.
I received the above graphic in response to the one I posted earlier on the stupid new AF uniforms. It must be the most important thing the AF is dealing with now right? Wrong.

If ol' Darth doesn't like what I have to say about the new Imperial Storm Trooper garb, he's really going to have a conniption fit over my next 'project'.

Remember my earlier posts (here, here) concerning AF Force 'Reshaping' BS? Well someone (apologies to all--I forget which of you sent me this in all the piles of other stuff we've been sending around) sent me a copy of the AF's internal 'pep talk' on the subject in a 'Top Ten Questions' powerpoint format. (This is the cover slide) 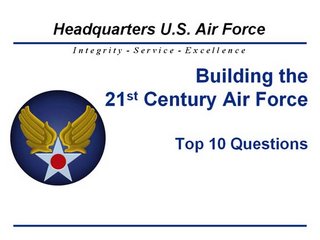 After viewing it, I unscrewed myself out of the ceiling, and decided bringing this pile of snake oil sales material into the public eye would be good for everyone's soul. Unlike the New York Times, I will be bringing you an unclassified brief, and it's not even marked "FOUO". I'm just sure that in the venues it's been played in so far, no one has raised the BS flag as high as I'm going to raise it here.

Each day that I find time to post,(UPDATE: that is when I get time to do the analysis and THEN post - there is a lot of research and analyses involved in this effort) I'll be presenting part of the briefing and pointing out exactly where and how this short-sighted course of action (dressed up as "visionary") avoids the real problems and sets the AF out looking for "Titanic-grade" icebergs
Posted by SMSgt Mac at 22:28