F-22 Critics: Not What They Used to Be (If They Ever Were)

“Spook 86” at In from the Cold has a most excellent fisking (Worth the Money?) of a recent opinion piece in Jane’s Defense Weekly by two agents of one of my least favorite domestic Non-State Actors: the Center for Defense Information. It has the honor of being among the least favorites because unlike most other anti-military establishment policy groups, it hacks away at Defense Policy under the guise of ‘saving’ it, and it seems like CDI has been against every “advanced” air weapon system that has come down the ‘pike. As I’ve mentioned before, CDI also seems to be one of the preferred megaphones for military and defense malcontents who think they had a better idea but “nobody will listen”.

The only contributions I would add to Spook 86’s point-by-point discrediting of the Sprey and Stevenson piece is that you can see a non-subscription copy of the article referenced at the CDI site here. For the time being, you can find additional Powerpoint briefings at the root of the article here if you want a good laugh.

Sprey and Stevenson’s cackling of course is refuted by the F-22 operators.

About the only thing EVERYONE agrees on is that if we do buy the F-22, we aren’t buying them in the numbers they’re needed. Blame Congress: their hand has been the one on the funding ‘start-stop’ button. And don’t be deceived by the now-standard ‘too costly’ critique. This is now an all too familiar game plan, repeated often enough to be included in Professor Mac’s Acquisition 101 course: 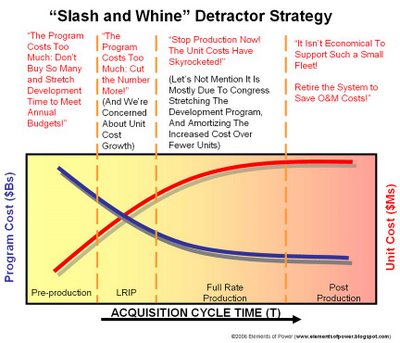 A Minor Nit
Sprey and Stevenson take a stab at 'clever' by posing a question to the effect of something like "Will the F-22 be the US's Sturmvogel"? An analogy to the Me-262 as a 'superior plane bought in too few numbers' to make a difference. The answer of course is this: it depends on whether or not the naysayers succeed in further slashing the number of F-22s. This bit of cleverness also then begs the question as to who is playing the role of the modern-day Hitler - whose dalliances in the development and mission delayed Me-262 production until it was too late to be a major factor in the outcome of the war? Would that be CDI and their ilk?

Hey, It wasn't me that brought up the Nazis!

Footnote 1: It is an odd coincidence that Sprey shows up on my radar at this time. I just finished reading a pretty decent book on the A-10 (and am preparing a review of it as a low priority behind my review of the AF 'force reshaping' pitch) where the author fairly gushes over Mr. Sprey.

Footnote 2. Sprey is player #2 of the Fighter Mafia that CDI has trotted out on this issue. The first was Colonel Riccione, who was pretty much saying the same things about the F-22 for CDI a few years back (maybe still?).
Posted by SMSgt Mac at 23:05