Horton is the Who…

As in “Who is a ranting Anti-globalist, Anti-capitalist, Anti-Western, Useful Idiot, Lancet Editor with his panties in a knot?”

Six HUNDRED THOUSAND deaths!
Lest you have any doubt about how absolutely ludicrous the ‘new’ Lancet ‘report’ that claiming 600,000 ‘excess’ war deaths is, just consider the source…..

Little Green Footballs Clearly Identifies the Enemy
Lancet editor Richard Horton was a “star” speaker at the recent “Time To Go” demonstration of the UK “Stop The War Coalition”. Updated 13 Jan 08: here's a direct link to the ‘You Tube’ video (Click on Screenshot below). 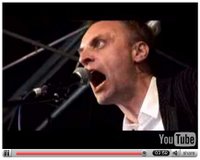 This is what passes as a ‘professional’ this days?
He does seem pretty passionate (frothing, actually) and his self-righteousness comes over loud and clear. Of course he was pretty self-righteous about the MMR shot a few years back, before his ‘error’ (see I’m a nice guy) was exposed and he had to play CYA.

Two Questions...
As this appears to have all of the statistical claptrap normally reserved for Second-Hand Smoking ‘studies’, I just have the same two questions about this so-called ‘report’:

1. What were their names?
2. Where are they buried?

Now this is the second Lancet sham piece on the subject of Iraqi war deaths (as I’m sure you’ve heard about by now or remember the first), so one wonders how much longer he will be at the helm of what was once the “world’s leading independent medical journal” given his apparent proclivity to spew this nonsense, alienate others in his profession AND bite the hand that feeds him.

If Horton is allowed to stay at the Lancet, I think we can count on another one of these ‘reports’ to come out in two years.......just before the next election....... again.......for the third time.

I can see it now:

PS: I wasn't going to blog tonight, but this guy gets the 'Noncom' BS Artist Detector in me going. For all his tough talk in front of a luddite crowd, something tells me that even if this twit had a d*** -- he still wouldn’t be a man.

UPDATE: The lead 'researcher' of this 'study' is the same as the last one. Coincidentally, he just happens to be a New York Democrat with political aspirations AND (Surprise!) an apparent bug up his sphincter about the war in Iraq.
UPDATE to UPDATE 01/13/07: The link above would have diirected you to an article about Les Roberts but the link has disappeared (it looks like it was due to the incompetence of the source vs. the conspiracy of a capable one), but the essence has been captured here (for now).
Posted by SMSgt Mac at 21:57

Email ThisBlogThis!Share to TwitterShare to FacebookShare to Pinterest
Labels: The Left, Useful Idiots, War on Terror