The Chief and I went to put flowers on my Father's headstone yesterday, and all the (known) veterans in the cemetery had small flags already in place. While the 'Veteran's Section' was a sea of flags as one would expect, I was surprised at the numbers/percentages of flags placed throughout the cemetery.

In Memoriam, here's a couple of photos of our late Fathers.

First my Father-In-Law, 'Rusty' in DaNang Circa 1969, with the 366th 'Gunfighters' Fighter Wing, 4th Fighter Sq. 'Fujiins'. Another photo of him flying in a formation of F-89s was posted earlier. 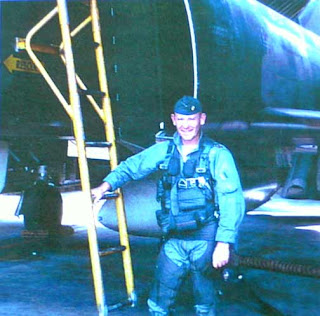 Next a couple of photos of my Father. The first one is a group photo of the XH-40 flight test 'crew' during evaluations of what would become the ubiquitous 'Huey' in front of one of three XH-40s. Dad is third from left. 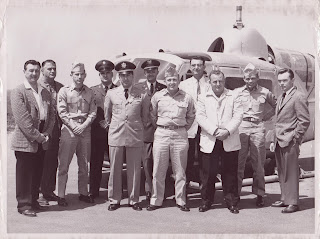 The second photo is of an H-37 with my Dad in the group of four in front of it, Dad is second from left, and the caption on the backs reads 'My first forced landing'. It looks like they did a little hedge trimming on an auto rotation. It was his first, but it would not be his last. 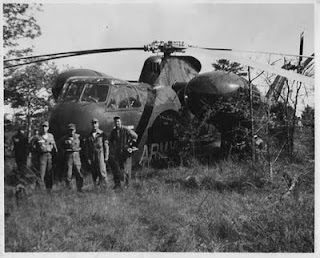