Wrapping up a long weekend in San Antonio, Texas on an Anniversary getaway.I lived in San Antonio twice while growing up, including the magical 1968 when the World's Fair was here. My Mother was born and grew up here. I've been back several times over the years and this time I have to say it was the most disappointing trip ever.

It wasn't the heat (105 degrees today!), it wasn't the so-called luxury hotel on the Riverwalk (Housekeeping WAS excellent btw).--- It was the 'city': San Antonio is rotting from the inside out. Between the panhandlers at every turn (Downtown AND out at the Loop 410) and crazies (Downtown) running around, the City is a shadow of what it was. I was particularly struck by the disrepair of city parks and properties, including a late 1800's stone house built by my Great-Great-Grandfather and several other buildings on the old Hemisfair grounds. My Grandmother sold the house to the city under an Eminent Domain deal for use in the World's Fair. The bars and restaurants along the Riverwalk and in the Northwest area were great, but speaking as someone who has bought nights in hotel rooms in Washington DC, San Diego, Atlanta, Tampa, and Los Angeles in the past two years, San Antonio is waaaay too proud of their hotels. Mine didn't even have non-valet parking, and the city lot across the street gouged me for a flat rate, in advance, on my last night that will require me to leave by 0800hrs tomorrow to keep from paying even more. Add to that finding just about the highest number of A**holes per square mile that I've encountered in the State of Texas, and I am left with very little reason to come back. I used to count San Antonio among my few real 'hometowns'. No more. We enjoyed the attractions we took in and our weekend in spite of instead of because of the 'city'. Thanks for nothing San Antonio, next time I'll drop my many hundreds of $ in Fredericksburg or someplace else where it is appreciated.

Update 18 June: Back home and able to post a couple of photos. Here's Great-Great-Grandfather John Kusch's house on the old Hemisfair grounds that I refer to above. The 'city' is not a very good caretaker IMHO, so no telling when and if they decide to just tear it down after letting it go to pot, so I decided to at least preseve the memory. 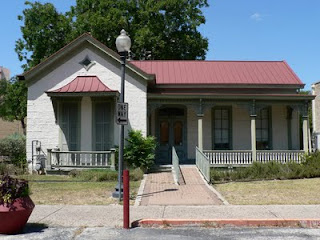 The city inventory description:
John Kusch, a stonemason, is believed to have constructed this 19th century, Gothic Revival house in 1885. Its interesting features include metal-clad gable roofs with box girders and simple, eave moldings. During HemisFair, it housed the “La Fonda Santa Anita,” an elegant, urbane Mexican restaurant patterned after a similar restaurant in Mexico City...

And this is how close it is to the "Tower of the Americas": 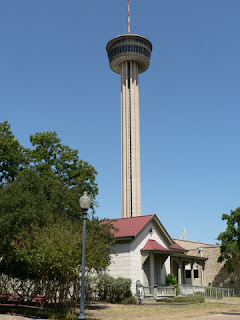 San Antonio became "famous" and it lost its appeal about 4 years ago. It started appearing on the most beautiful / best places to live in America and its been down hill ever since.

Sorry your trip sucked but San Antonio is just a smaller Dallas or Houston. Nothing special anymore.