Ah...A 'Boeing Tall Tale' to scare the children. Someone should tell them that the UAV world is still a fairly small and close-knit one...and made up of people with very good memories.

David Axe has a piece up at Wired’s Danger Room that self- identifies as an uncritical ‘Boeing POV’. While Northrop Grumman evidently declined to comment on Boeing’s collective memory, that hardly excuses the slobbering deferral to Boeing’s ‘claims’ and the gross lack of investigative skill or skepticism applied in the article.

That it seems like Axe didn’t bother with a critical eye at all in this ‘effort’ is shown by the assertion that the Government gave Northrop Grumman money to develop the X-47A. Wrong. US Government funding came after the development of the Pegasus. 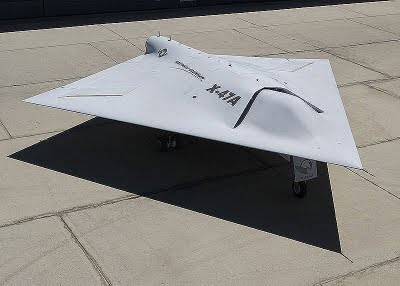 Northrop Grumman X-47A Pegasus
The ‘Pegasus’ was a “company-funded” effort that Corporate Vice President Scott Seymour sponsored and nurtured through a rapid development process to keep Northrop Grumman in the UCAS running. This fact was in all the news at the time. The ‘Pegasus’ existed before DARPA got involved and gave the UAV the ‘X-Plane’ designation.

Since Scott Seymour no longer works for Northrop Grumman, perhaps he might be willing to talk to David Axe about it some and give another viewpoint that isn't 'All Boeing'? I know software developers and integrators that produced the X-47A, so far the only response I’ve received from any of them when I refererred them to this article is that the piece made their stomach turn….and to tell Axe the X-47(A or B) is not ‘remote controlled’: It is AUTONOMOUS -- with provisions for human intervention by exception rather than as a rule. If Axe ever viewed the X-47A first flight video, he might have observed that no one was 'controlling' the Pegasus: everyone was monitoring the flight. The only commands given by the ‘controller’ (‘Old Heads’ in the Test Pilot community should immediately recognize him in the control room BTW) was to hit the ‘GO’ button to get it moving off the parking spot, some EOR power checks by the engine contractor,  the ‘release brakes’ command for takeoff and a precautionary speed change. For a 'First Flight'? Incredible. The whole point of the exercise was to demonstrate autonomous flight with a precision carrier-type approach and landing, which the demonstration did admirably (See SRGPS link below) .

Having got the who-funded-what wrong on the X-47A, Axe’s Boeing fairy-tale tellers didn't get any better. He should try to be a little less gullible next time. He had me falling out of my chair laughing with the Boeing claim that since their X-45 was 'thinner' it would be stealthier. He should have asked them: how many LO weapon systems they've fielded to-date? There are two houses that really ‘get’ LO: ‘Northrop’ and ‘LockMart’. Boeing is playing catch-up, and OBTW they benefitted greatly in the LO department when they bought McDonnell Douglas who benefitted from exposure to Northrop’s LO expertise on the F-22 and JSF programs. If the Borg (my Lockheed Martin colleagues’ favorite name for Boeing) hadn't bought Rockwell and McDonnell Douglas, they would be even farther behind than they are.

Classic Boeing Hybris
My favorite line from the article though has to be: "How could Northrop, with what they strongly believed was inferior software, possibly pull off a robotic carrier landing cheaper than Boeing?"
WTFO? Sounds as if the Borg ‘believe’ it, then it just HAS to be true, doesn’t it? Not on your life. Boeing's explanation on the cost differential doesn't hold water for a variety of reasons I won’t (can’t) go into either. Suffice to say the X-47A first flight was also the first flight for the Navy’s Shipboard Relative GPS (SRGPS) system aka ‘Navy JPALS’. Read the entire article at the SRGPS link – there’s lots of info on what Northrop Grumman actually accomplished (on their dime) with that little self-funded ‘Phase 1 ’ hop.

Raytheon BTW, has since selected Northrop Grumman’s IMU as the heart of their JPAL System. So perhaps Northrop isn’t as 'hapless' when it comes to navigating UAVs around the patch as big bad Boeing would like the unwashed masses to believe? Maybe Northrop Grumman has resources to draw from beyond their airplane-building sector that Boeing chooses to selectively ignore?

Axe was fed a  treble hook on a 100lb-test line this time. If he is not careful, he is well-positioned for continued use as a Boeing pawn in Boeing's ever-more desperate attempts to be relevant on the combat aircraft scene.

I fear Boeing will eventually start winning 'something' just to keep them in the game. Expect to hear even more woe-is-me BS from Boeing as production contracts near for a Naval UCAS. But I had to listen to Boeing tell the world it was they who really did the software and integrated the B-2, and now LM gets to hear the same crap over the F-22. Boeing shouldn’t be allowed to rewrite history on UCAS programs as well.

06/15/11 Update:I'm starting to get e-mail correspondence on this post pointing out other problems with 'the story' as Boeing narrated and Danger Room presented. One commenter noted that Axe got the first flight date of the X-47A nearly a year later than it actually occurred. The X-47A first flew on 23 Feb 2003 and NOT "January 2004" as claimed in the Danger Room article. One way this milestone might have been screwed up could be that the reference of the February 2003 flight was pulled from a reference to it posted/published in January 2004.
Posted by SMSgt Mac at 22:38