I was wondering why there hadn't been any actual DDG-1000 "Zumwalt" photos on the web even though there were discussions about how much of it was complete. I should have known they were doing the bulk of the buildup indoors, since they are using the modular construction approach not unlike carriers (too big to do all inside) and submarines (that are built up under shelter).
Defense News has the words and a photo. 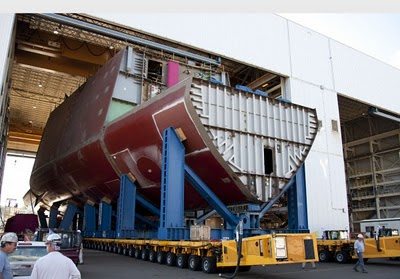 The message is almost TOO positive:


"We're on time, we're on budget. We're within budget," Capt. James Downey declared during an interview earlier this month. "We're hitting the milestones within the program."

The Zumwalt's astounding completion level of 60 percent at keel-laying - once one of the earliest moments in a ship's construction - is a byproduct of the modern, modular building methods, Downey said.

"The ship is built in modules," he explained, including ever-larger elements known as ultra units. "When the first ultra unit is complete, that's when keel-laying is."

The forward midbody module, which includes the guns, weighs more than 4,000 tons - larger than a littoral combat ship, Downey said. The modules feature a high degree of outfitting, including smaller details like wiring, pipes, and control consoles to main and auxiliary propulsion engines and missile launchers.

As the ultra units are joined together, the Zumwalt will rapidly take on more of its ultimate shape. The composite deck structure, weighing more than 1,000 tons and now more than 75 percent complete, is expected to be barged from Mississippi to Maine in late spring, and the Zumwalt is scheduled to be launched in July 2013. Initial delivery is set for 2014, with completion of the combat system to follow in 2015.

Getting all the systems in all the modules to work well with each other will be the hard part, but they've done a lot of advance work already:

A DDG 1000 power plant at the Navy's Land-Based Test Site in Philadelphia conducted a successful, full-scale power test in May.
"We tested the complete propulsion system in local control," Downey said. "It pretty much passed with flying colors," although some test equipment needed upgrading. "We made no changes to any of our [ship] equipment."
The advanced induction motor (AIM) - heart of the integrated power system - "has performed very well," Downey said. "It met all the requirements at land-based testing. It exceeded the requirements."
Officers and crew of the DDG 1000 have already been reporting for duty, Downey said, with several members spending time this summer underway on British Type 45 destroyers, which also use AIM engines.
"We're learning what to expect out of the system," Downey said. "It's good for them to see a working system out at sea."
Tests of BAE's 155mm advanced gun system and its associated long-range land-attack projectile also have progressed "very well," Downey said. Two successful live-fire tests were held Aug. 30 at White Sands Missile Range, N.M., against live targets, which were hit at a range of 45 nautical miles. The round, he said, is hitting targets within "40-ish inches" of where it's aimed, against a requirement of 20-30 meters.

Sounds promising. May the program realize every advantage and avoid every pitfall. Maybe we can get the Luddites that capped the program at three units to reverse the decision.
Posted by SMSgt Mac at 19:34