...and it is NOT as big a deal as you might think, and is certainly less than the JSF-Haters fantasize. 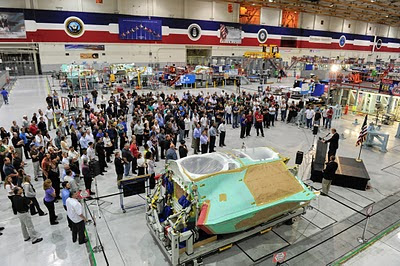 
DefenseAlert - 09/16/2011 The Defense Department is facing a potential $3 billion bill to modify early production Joint Strike Fighter aircraft to final configuration, roughly an additional $10 million for each fighter jet that is not accounted for by Pentagon unit-cost estimates, according to the Senate Appropriations Committee.

This is the same Committee using 'Concurrency' as a red herring to recommend holding back the F-35 production ramp up discussed here. In fact, this 'story' is part and parcel with the 'concurrency' angle. Other tidbits:


...The Senate panel, in a report accompanying its mark of the Pentagon's fiscal year 2012 spending bill, estimates this cost by comparing the Air Force's experience developing the F-22 with the F-35.

..."Based on F-22 experience, a common configuration modification for the Joint Strike Fighter program would cost approximately $10 million per aircraft resulting in a $1.67 billion to $2.29 billion modification program," the Senate panel's report states

...These costs are in addition to the $771.2 million in additional costs -- disclosed this summer by the Pentagon -- to reconfigure the first three F-35 production lots. Combined, the Senate panel estimates the total retrofit bill could reach $3 billion.

So, before the 'Oracles of Doom!' (Mainstream Aero Blogs and Boards) get a hold of this story and blow it into another 'F-35 Nightmare' fable, let's consider what these costs "mean" within context of  the estimates and the actual costs of aircraft delivered to-date:
Remember this chart from a Canadian briefing? (I first used it here in discussing the earlier $771M cost upper for weight reduction) 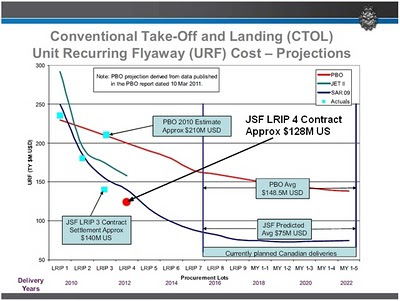 Look at the LRIP 3 Contract Settlement and the LRIP 4 Contract values on the chart. What is the first thing you notice? That's right, adding the $10m+ costs to retrofit the LRIP 3 & 4 aircraft will bring the total production costs in line with the LOWEST cost estimate curve plus or minus a small percentage.

Any bets at least one mush head out there on the defense boards will add the "new mod costs" to the highest estimate cost curve line to make even more outrageous cost claims?  What are the chances that the Congressional estimates for the mods are high in the first place, given the crude F-22 parallels used?

And remember the earlier $771M was to cover the weight reduction effort. A Total Ownership Cost perspective was taken in discussing that change.

Was Lockheed Martin 'lucky' or 'good' in bringing the costs in so low on initial production that they can essentially include the mod program and still keep close to the lowest cost curve?