Other than using the word ‘blame’ in the headline to draw the reader’s eye there’s a pretty good piece at the Navy Times on the F-35 tail hook ‘issue’.
While I don’t know who made the “claim” mentioned within this excerpt, this seems to contain a series of reasonable observations:


Richard Aboulafia, an analyst at the Teal Group, Fairfax, Va., said the claim that the F-35C could never land on a ship was always highly dubious. ''They turned the YF-17 into a carrier plane, why couldn't they correct carrier-hook problems here?'' he said. ''This does not appear to be a killer problem.'' Flight testing is designed to uncover and fix problems with a new aircraft, Aboulafia said. ''This is the kind of problem that might come out during the flight testing of a carrier-based plane,'' he said.

Lest someone think arresting gear functionality should have been a ‘slam dunk’ out of the box, “History” has shown it more to be something that has to be worked out with every plane. See this excellent blog for a pretty decent survey of past designs and challenges. Even if the 'first round redesign' doesn’t provide the final ‘answer‘ to the problem, it will probably provide more data to support further tweaking of the arresting gear. But if the problem isn’t fixed the first time, I can almost guarantee there will be near-instantaneous 'doomsayer' claims that something much more draconian/costly/delaying 'will have to be done’. I am just mentioning it now so you can get some ear protection before the caterwauling commences. I'd wait to get the data from the next round of tests, and get excited only if the data told me I should.
PS: I’d discuss the technical challenges of successful arresting gear development in more detail, (beginning with the fact that when it comes to an aircraft system interacting with the ship system what we are talking about is essentially a chaotic meta-system) but most people’s eyes would glaze over before I was finished. OK, I admit it, since I deal with this kind of stuff from 9 to 5 it would be no fun for me either. The article linked above covers what may be the critical bits in this case anyway.
Just think about ALL the variables that might be involved and you’ll get the idea. 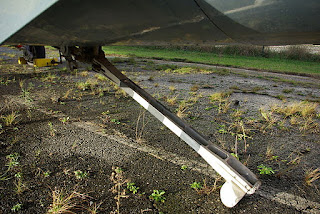 Nice short F-8 tail hook...but a loooooong way back from the landing gear. Image from Wikipedia Commons
Posted by SMSgt Mac at 21:38