Friday I purchased a Walther PPQ 9mm at the Carswell JRB Base Exchange gun counter. Other than the BX makes you fill out more stupid paperwork to cover their 'hineys' than the Federal Government requires for their purposes, and having to call the base police to let them know you're leaving with a weapon, it was fast and easy. I went ahead and bought one at the BX because their price was $110 lower than the local Gibson's/ACE Hardware, and Gibson's just about always has the lowest prices that I've seen among the local civilian gun stores (and so have bought a pistol from them before). I told the counter guy at Gibson's the BX price and he didn't try to beat it, just gave a look of surprise. 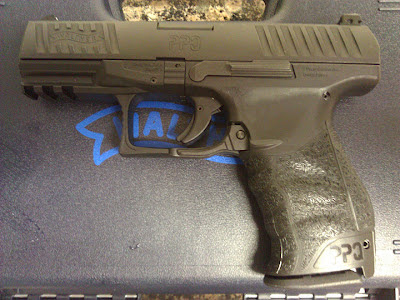 I didn't get to shoot it this weekend because of family commitments, so I took advantage after work of having just enough time to put 30 rounds downrange before dinner was ready, just to get a feel for the weapon. The initial impression is...

At the three yard mark my first round barely cut the 9 ring on the right side with my aim at dead center of the bullseye. OK. It obviously needs windage adjustment before I bring it back to the range. But for the rest of this trip, I just offset my aimpoint to the left. Second shot at 10 3 yds was an 'almost' bullseye, so I aimed a little more left. Next 8 rounds were all 'in the black'. The trigger, grip and recoil, and ease if control was everything I'd hope it would be and it really was hard to slow down the rate of fire as Hickock45 had remarked previously. Magazine release will take some getting used to, but in a good way. As a Lefty, it is kind of nice to grip the pistol with sufficient force without worrying about  inadvertently dropping the magazine. Score at 3 yards:98/100.

Aiming at the left side of the bullseye, and slowing down the rate of fire a bit, I managed to hit the bullseye every time and 9 of 10 shots were inside/cut the inner 1 3/4" ring. The rounds were still hitting a little right of center, so I mentally moved my aimpoint for the next round at 15 yds even further left. Score at 6 yards: 100/100. 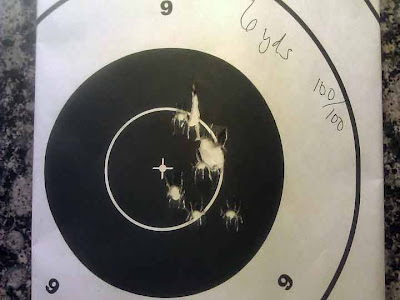 OK, I admit it. at 15 yards, I let the giddiness from doing so well at 6 yards get to me and rushed my shots a tad. Combine that with the imaginary aimpoint I was using well left of the bullseye and I only hit center 6 times, was inside the 'nine' three times, and had a 'wild' one inside the 7 ring. One thing I'm going to have to get used to is the ambidextrous slide lock. I am so used to having to use my pointer finger to release the slide on my other weapons, I had to keep reminding myself I could use my thumb just like the common folk (rightys) with this pistol.  Score at 15 yards: 94/100.

I think I am a 'pretty good' shot, but am in no way one of these 'sub-MOA' shooters that seem to be in the majority everywhere on the web boards. But I will also say that I think this weapon is going to make me look gooood when I get used to it (and get it sighted in).

P.S. I like the takedown procedure for this pistol as well.
Posted by SMSgt Mac at 22:48

ok. i'll have to go to the gun store and rent one to see how much i like it. but you have to admit this is one butt ugly handgun!

Hey I think it is downright sexy looking compared to those artless Glock 'bricks' you see everywhere.
Seriously, if you rent one, try to get the right backstrap (S,M,L --Medium worked best for me). Most comfortable pistol I've held and fired in years.