I've pretty much completed the AR project. That is to say, it is about as 'complete' as I can ever call it same (except for optics -maybe next week). This means I've got time to start resurrecting Grandma's elk rifle: a 1906 issue of the M94 Swedish Mauser Carbine. I decided to get all the hardware in hand before I specify a 'sporter' stock for it because I didn't want to lay out the cash for what I wanted, only to find out I didn't have a working action to put in it.

The rifle has not been updated since Granddad built it around 1960, when Mausers were like AK clones are today. Yesterday I received in the mail a new (really!) trigger guard with catch release and a new (really!) floor plate that I ordered last week. I'm pretty sure they are from later Swede models as they are interchangeable among the 'small ring' Mausers and the later models are more available, but they are 'new' -- the floorplate was still in preservative from sometime before the 1940s. Markings for the new parts are also appropriate for a Swede, but as you see in the photo below, I had to give up hope of maintaining matching numbers because Granddad ground down the part of the trigger guard with the floorplate latch and serial number on it when he cut down the magazine walls. I acquired the floorplate in case I needed it, but I will be able to keep the original 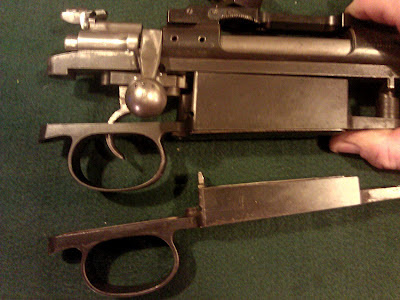 Close examination, reflections on my late-Father's stories about the weapon and my knowledge of Granddad tells me that he probably never had the original rifle - just the complete action. An ultimately pragmatic man, I doubt cutting down a rifle by sectioning the 'lower' and the trigger would have occurred to Granddad if it had come with usable furniture.  I suspect the stock that was on it when I was given the rifle began life as a stock for a .22 caliber rifle that he already had in hand. Add the fact that he was building it for Grandma, a petite woman, and the mix of factors probably triggered the idea in him to cut it down.


The Family and the Swede

This rifle was built 'as is' for one thing: So a small woman could lug a high power rifle all over Eastern Oregon to take Wapiti. Granddad was also on the smaller side, so I think that's why it became his favorite over time as well. It was always referred to as "Grandma's Elk Gun", but Granddad probably used it more by virtue of the fact he went hunting quite a bit without Grandma and Grandma never went hunting without him. It was hunted with almost every year for twenty-five years, and it took elk (usually two or more) more years than not-- and Mule Deer from time to time as well. Upon Granddad's death (at 91 in 1991), his rifle passed to my Father, who passed it to me. I took it hunting once about three years ago, but didn't see anything suitable for taking.

Taking the Swede into the field did give me some insight into what I might have to do to make it a solid hunting rifle again, and one that was perhaps tailored to Texas hunting conditions. First, the Swede shoots flatter than my .30-06 out to at least 200 yds and I suspect farther.  I found out that the original scope simply did not have enough light gathering capability, so a new one will be in order. Practice firing it immediately told me the gun was too powerful for the stock. Though it has an excellent (and substantial) recoil pad, my first thought after shooting it just once was: "Dang! I thought Grandpa liked Grandma!"

The 6.5 x 55 is a lot of round to mount on an itty-bitty stock. It fits in nicely in a crowd of larger calibers. The round puts lots of powder behind a long narrow projectile spun up to high stability .
The 6.5 x 55 Swedish is second from the right in the picture above, between the .308 (far right) and the 8 x 57 Mauser (third from right)

After test fitting the 'new' lower and 'old' floorplate, and keeping the same follower and follower spring, last night I ordered new fore and aft guard screws (old ones were 'cut down') and a new military trigger. I really like the standard two stage trigger of the Swede and as long as the mechanism behind the lever is sturdy (it is) I see no reason to go to an aftermarket trigger. After I get these parts I'll decide upon a low-profile safety: the current one is an original modified 50+ years ago by Granddad to 'work around' a scope and it looks like it needs more metal to keep it from cracking off at the wrong time and I already don't like the way it feels now.


No 'Bubbas' in These Parts

Granddad was an outdoorsman his whole life, and we were raised with the now somewhat quaint idea that firearms were weapons and 'weapons = tools' --- Tools that were to be used and not merely conversation pieces fondled every so often. In preparing to resurrect the family treasure (for that is all it will ever be -- Granddad engraved "Mc" on the receiver and barrel) I did enough research to discover there is a whole corner of the virtual world filled with keyboard commandos who denigrate anyone who builds a Mauser, especially the rarer of the type such as the 1894 Swede, in any other configuration than 'restored'. They often refer to treatment of weapons in other than their 'approved' manner as being 'Bubba'd".

They can pound sand.

If they believe vintage Mausers should be restored perhaps they should buy them all and restore the weapons themselves. Their opinions of what others do with their property is of no consequence. This rifle was, IMHO not a prime example of type when Granddad probably rescued it from the scrap pile. It has now been a functional no-frills hunting rifle most of its life. THAT is the heritage of this weapon that I intend to faithfully honor. (Well, maybe a 'frill' or two).

you made me laugh with that. the pound sand was a nice touch too.


seems like you're getting into a bit of gunsmithing..first you build an ar...now a mauser? what gives? i might need to commission you to build something for me:))

Well the AR was just an assembly job, and the Mauser is more like 'de-smithing' so I don't think I can claim any skills in those cases. So far I'm just a weapons hack. The ARs are easy these days: practically plug and play. the hardest part is getting the parts you want when you want them. I'm guessing it will be easier to get parts after this Mayan end-of-the-world cr*p is past and if the 2012 election is resolved favorably. I recommend building it to anyone who wants one.
My plans for the Mauser are to put it in a 99% inletted Mannlicher stock. Since it is a carbine, the barrel is only 17.7 inches long and the barrel end has a step-down at the end to accomodate the original military nose cap. That barrel step is 'fugly' so I'm thinking of fabricating a 'civvie' nose cap in brass for it. The barrel was originally fully supported and clamped, so tieing it down in a manner reminicient of the original is appealing to me. If I do the work then I think I could claim a little smithing skill. If I more likely just design it and have someone else build it, I'll still just be an assembler.
I'm working on cleaning up the armory because the Chief has gone back to school and that frees up a little more time for me in the evenings.

I had a Great Uncle who owned a sporterized 1894 Swede. I think that carbine is what made me a gun nut. It had an aperture rear sight, full Mannlicher stock in a beautiful Birdseye maple, a hooded front gold bead, a really interesting perforated muzzle cap that must have acted like a brake, and a butterknife bolt handle. I wanted that thing since I was about six years old. When he passed, my cousin got the rifle, and when I had finally gotten out into the workforce and acquired enough spending cash, I was going to buy it from him, no matter the cost.

It was stolen in a burglary before I could.

So if I EVER come across a bubba'd '94, I intend to buy it and make as close a replica of that carbine as I can, no matter the cost.