I noted in passing this week that Military.com's F-18 'SuperDuper' Hornet advocate 'Black Owl' has appeared to have dropped posing in his/her Naval Academy "Midshipman" costume as his/her comments have degenerated progressively lo these many months since I first noticed him/her at DT/DoDBuzz. At DoD Buzz today I commented in response to something 'William C' posted:


I just think it's interesting that 'Black Owl' has dropped the faux respectability, carefully selected phrasing, and poorly simulated gravitas that posing as a Naval Cadet required of him. Must have been exhausting.

BTW: We may logically presume that IF the F-35 still had a serious weight challenge, they, like all the other non-challenges not mentioned, would have been brought up in the most resent GAO reports. Things must be going pretty good in the weight area, since the GAO didn't even TRY to spin a negative angle on weight last time.

Recently, someone apparently 'posed as the poser', imitating Black Owl, just as someone did to me not all that long ago, and he/she took the trouble to get an IntenseDebate 'identity' of 'BlackOw1l8E'.

This particular 'BlackOwl' chose to respond (more oddly than I thought he/she would have) with:


First of all the USNA does not have cadets. That's West Point and the USAFA. We have midshipmen. Secondly: Yes, if I was to fake my identity, then a naval midshipman is the first and most obvious choice. I would never think to fake being a commissioned officer or some other member of the aviation community or something even more credible than that. USNA Midshipmen are the most ideal thing to fake because they are the most credible source ever (insert sarcasm). That makes no sense.

The GAO still mentions the terrible paper thin weight margins of the F-35B. They didn't mention those of the F-35A or F-35C, but that doesn't mean they're not there. I think if they had made drastic improvements in that area Lockheed Martin would have boasted more about it.

I attempted to respond today with: 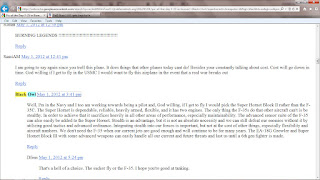 Thanks to web caching we have:

Black Owl May 1, 2012 at 3:41 pm
Well, I'm in the Navy and I too am working towards being a pilot and, God willing, if I get to fly I would pick the Super Hornet Block II rather than the F-35C. The Super Hornet is dependable, reliable, heavily armed, flexible, and it has two engines. The only thing the F-35s do that other aircraft can't is be stealthy. In order to achieve that it sacrifices heavily in all other areas of performance, especially maintainability. The advanced sensor suite of the F-35 can also easily be added to the Super Hornet. Stealth is an advantage, but it is not an absolute necessity and we can still defeat our enemies without it by utilizing good tactics and advanced ordinance. Integrating stealth into our forces is important, but not at the cost of other things, especially flexibility and aircraft numbers. We don't need the F-35 when our current jets are good enough and will continue to be for many years. The EA-18G Growler and Super Hornet Block III with some advanced weapons can easily handle all our current and future threats and last us until a 6th gen fighter is made.

BTW, I have a nephew who IS a Midshipman. The ‘Cadet’ mention was an oblique diminution referencing ‘Naval Sea Cadets’ (which is fine and dandy name to be called if one is a teenager, not so fine if you are a real Midshipman).

And after first getting the typical 'too long, please post in pieces' response, when I got the post short enough, I received an immediate notice that my comment "has been deleted by the administrator".
WTFO? 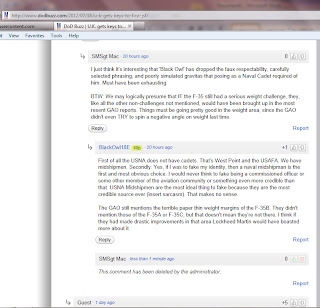 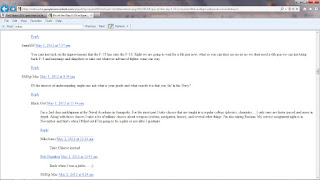 I tried posting another snippet from the same cache where that Black Owl specifically claimed the 'Middie' mantle:

SMSgt Mac May 1, 2012 at 8:39 pm
IN the interest of understanding, might one ask what is your grade and what exactly it is that you 'do' in the Navy?
Reply
Black Owl May 1, 2012 at 11:44 pm
I'm a 2nd class midshipman at the Naval Academy in Annapolis. For the most part I take classes that are taught in a regular college (physics, chemistry,…) only ours are faster paced and more in depth. Along with those classes I take a lot of military classes about weapon systems, navigation, history, and several other things. I'm also taking Russian. My service assignment night is in November and that's when I'll find out if I'm going to be a pilot or not after I graduate. 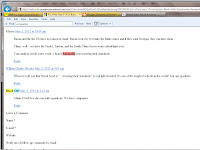 Almost Forgot: (Update 21 July 2012) I also asked the 'cached' Black Owl what 'squadron' was he in. I asked for a couple of reasons. First, if he/she responded with a "Squadron x" kind of answer, I'd probably conclude I was dealing with a 'young un' and would tailor my responses accordingly. I was more interested in the time lag/tag of any response. it came back with a 2:22AM time tag. Even adjusting for time zone differences, REAL Middies don't have slack time to keep a comment thread busy for an entire day and into the night. (1 May was a Tuesday BTW). Hence my conclusion that Black Owl was a poser, and a Boeing F-18E/F 'Fanboy' to boot. I've pretty much just enjoyed myself watching his facade degenerate over the last couple of months.  Update End .

Odd that I was able to post elsewhere in the same thread, and not allowed to respond to this current 'Black Owl' directly at the same time. I'm open to alternative explanations, but:

It looks like DoDBuzz has a 'sockpuppet' problem in the threads.
(And from the 'administrator delete' episode, there's no telling if it is 'internal' or 'external').
Posted by SMSgt Mac at 18:46

I'd wondered about his rather heavy posting schedule myself. Can we set you up for a cage-match with Dfens next?

LOL. Well 'Dpends' is a "Class A" troll who feeds on attention. The best way to deal with him is to just talk right past him in a manner that highlights his s*** is usually pure B.S. I ALMOST waded in on a B-1 'picture post' a little while back (don't remember if it was DT or DoDBuzz).

There is a remote chance he really was a middie who graduated in June. But I doubt it. I have enquiries in with peeps at Annapolis. ;-)

Got the message Arcturus. You confirm the ID I was having looked at. I know he got flight school. Here's hoping he gets to drive CODs. If he was a decent Middie, I'll just take down his drivel. I'm as much shocked at the poor writing style (Sophomore H.S. in my day) as the content of his 'work'. If he's a ring-knocking Prig, I'll turn the Chief in the Fleet on to him. There still may be more than one guy "flying the Black Owl" flag though. One at least has been so disrespectful of Senior Military leadership I can't imagine he was ever Naval Academy.