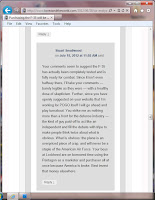 And the response was pretty much as expected:


“Your comments seem to suggest the F-35 has actually been completely tested and is fully ready for combat. Since it isn’t even halfway there, I’ll take your comments — barely legible as they were — with a healthy dose of skepticism. Further, since you have openly suggested on your website that I’m working for POGO itself I will go ahead and play turnabout: You strike me as nothing more than a front for the defense industry — the kind of guy paid-off to act like an independent and fill the debate with tripe to make people think twice about what is obvious. What is obvious: the plane is an overpriced piece of crap, and will never be a staple of the American Air Force. Your boys at Lockheed are on borrowed time using the Pentagon as a marketer and purchaser all at once because America is broke. Best invest that money elsewhere.” (screen capture to left)

Notice the lack of any real attempt to engage on the validity of the ‘debunking’ itself? I must say I find the notion that I’m a sort of paid secret ‘front’ for the defense industry (I’m a ‘highly-compensated’ engineer/analyst, bucko!) scouring the web for evil-doers on the behalf of the F-35 for bounty….hilariously conspiratorial.  I do the scouring for free! I suspect Mr. Smallwood probably also operates under the delusion that there actually IS a ‘Military-Industrial Complex’.

My comments “seem to suggest the F-35 “has actually been completely tested”? No. I cited an expert operator from outside the acquisition/development program who is now fully qualified to fly and instruct other pilots in the F-35. HE says the F-35 is as maneuverable as an F-16 (or better). HIS  statements are an overmatching counter-weight to the tired old claims made by ignorant activist ‘reformers'.
Alas, I fear Mr. Smallwood’s insufficient language skills may be a barrier to meaningful communication, as he also asserts that I “ have openly suggested on" (my) "website that I’m working for POGO itself”.
No Mr. Smallwood. Perhaps you missed the part in my initial post where I wrote: “I’ve noticed a marked uptick in the foreign blog and online alternative newspapers containing references to POGO’s pet ‘expert’ commentators. POGO ‘special operators/fellow travelers’ seem to be most active in F-35 Partner nations where economic conditions are tightest and in countries that represent existing or emerging markets for F-35 Foreign Military Sales (FMS).” What I openly asserted is that Mr. Smallwood was spoon-fed the drivel he regurgitated, and I also suggested that Mr. Smallwood was furthering POGO’s aims: a 'de facto' agent at the very least. I left open the issue as to whether or not they also further his own interests until now. Hence the “a special operator/fellow traveler” reference.
Mr. Smallwood then uses this mischaracterization to then postulate he could also view me “as nothing more than a front for the defense industry — the kind of guy paid-off to act like an independent and fill the debate with tripe to make people think twice about what is obvious” ?
Assuming Mr. Smallwood is a principled man (why not?), I can only conclude from this statement that he has never been exposed to disciplines that are based upon consequential knowledge and the application thereof. Otherwise, would he not have been able to attach proper value to claims made by competent experts in their field (forget nameless ‘me’, what about Lt Col. Kloos)? And could he then not shrug off the political machinations of agent provocateurs who are paid by an anti-defense Non-State Actor that is funded largely by left-wing foundations and aging hippies--however sympathetic he might be to their flawed ideologies?
Sigh~I suppose for some, it would be far easier to shrug off the fact that the ever-increasingly larger circle of people with ACTUAL F-35 experience typically speak very highly of it than change any preconceived or ill-informed decision. 'They' would rather cling to the shrill prevarications of outside critics with no relevant or insufficient expertise and experience, all in order to preserve some philosophical blind spot.

Kudos to ‘SpudmanWP’,  a visitor who is also a “SNAFU!” regular, for attempting to reach out further to Smallwood in the comment thread...and for engaging on behalf of evidence and logic. I’d take more of an interest myself, if I thought there was any hope. As I see it, Smallwood’s just an outlet for the real troublemakers. I want to keep my 'eyes on the prize'.

In Closing: By "barely legible", should we assume he meant my debunking was ‘barely intelligible’? Aside from an "it's/its" typo that got by me I didn't find anything too egregious. I ask, because I thought ‘dumbed it down’ as far as I dared without doing violence to the meaning within: 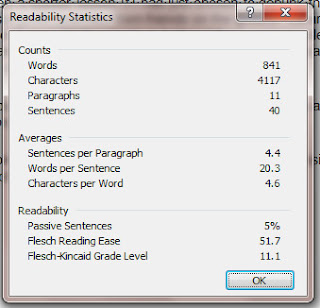