POGO Wrongly Cries “Foul!”... While Sniping in a Ghillie Suit

Last week, POGO’s Ben Freeman posted another fact-free and ideologically-driven screed, this time at the ‘Puffington Host’ (You know where I mean. I try not to ever link to that swamp) titled “The Guerrilla Warfare of Pentagon Contractors”. To give you the flavor of the misdirection he peddles within, here’s a clip that gives a pretty good summation [emphasis mine]:

Last week Politico reported that defense contractor's new plan is to "threaten to send out layoff notices -- hundreds of thousands of them, right before Election Day." This threat is intended to frighten incumbents into rolling back the impending Budget Control Act sequestration, which would reduce Pentagon spending by roughly ten percent per year for the next ten years.
Despite the doomsday rhetoric and contractor funded "studies" reporting grossly overinflated job losses they claim would result if the Pentagon's more than half a trillion dollar budget is cut, there is absolutely no reason these companies would need to have massive layoffs. This is nothing more than a political stunt.

One would think POGO should know a stunt when they see one, but they either fell short this time or are willfully prevaricating. Perhaps it is because they aren’t too familiar with parts of acquisition law concerning Government contracting and labor rules? I do suppose there’s no exposure to the workings of the current monopsony in POGO’s exclusive digs in the Ivory Tower end of Castle 'Non-Profit'?

Contrast POGO’s flippant dismissal with this excerpt from a recent Defense News article:

Panetta’s meetings come a week after the heads of Lockheed Martin, Northrop Grumman and Pratt & Whitney met with top Office of Management and Budget officials seeking greater clarity on the government’s plan for implementing nearly $500 billion in mandatory defense cuts over the next decade that are scheduled to start Jan. 2.
OMB told the executives it does not plan to issue sequestration implementation guidance until after the November elections, sources said. The meeting was requested by Aerospace Industries Association President Marion Blakey.
Although defense industry leaders have long said that planning for sequestration will be difficult given it is unclear what the specific impact of automatic cuts will be, they have become increasingly vocal that job losses would be unavoidable starting in January.
And they’ve stressed that federal guidelines require them to notify their workers of potential mass layoffs at least 60 days in advance — that would be on the eve on the election.
Having been one of the many people in the industry long enough to have found themselves on the receiving end of one of those federal ‘60 day notices’ when just one Government program was cancelled or cut back, and having witnessed many others, POGO’s dismissive attitude speaks volumes as to their indifference and/or ignorance. Multiple programs being suddenly cut/cancelled/impacted for reasons other than cause can only cause chaos in the industry. Carrying out such pointless cuts every year over a period of years? Sounds like POGO/Leftard heaven and National Defense Hell. Ask anyone who’s been around Defense Aerospace ‘more than a minute’. They’ll tell you: POGO is full of Sh*t.
Freeman’s POGO puff piece is irritating, but it is more important to keep in mind what this whole sequestration gambit is really about: Democrats playing political games with National Defense.

Well Lookee’ Here!  POGO’s got Their Own ‘Snake Eaters’ On Point

So While POGO’s Freeman is claiming the Defense Industry is employing ‘Guerilla Tactics”, I’ve noticed a marked uptick in the foreign blog and online alternative newspapers containing references to POGO’s pet ‘expert’ commentators. POGO ‘special operators/fellow travelers’ seem to be most active in F-35 Partner nations where economic conditions are tightest and in countries that represent existing or emerging markets for F-35 Foreign Military Sales (FMS). What a surprise (Not!). The most recent one to catch my eye was an English-version of a Korean ‘alternative’ paper article by one delightfully named ‘Stuart Smallwood’ who also mirrored most of his piece at his own blog.
Smallwood’s entire post reads like a POGO press release, and it is quite obvious from his phrasing and the conclusions surrounding his commentary that Mr. Smallwood (a ‘grad student’ in "Asian Studies" out of Canada now mucking around in other people’s cultures, Eh?) that he hasn’t a freakin’ clue as to what he is writing about. In the comments thread of his ‘blog’ last night I posted a challenge:

Heh. If I demonstrate that your post is erroneous on at least one or more key points, will you promise to never again publicly opine on defense topics about which you are ill-informed and not equipped [to discuss*]? And if so, will you also give POGO back the spoon with which they have been feeding you this stuff?
*I have an oversensitive touchpad on my laptop (that I keep turning off and Microsoft keeps turning on whenever they push updates) that causes me no end of typo and edit problems. I didn’t catch two words had dropped until after I posted my comment.


When I went back today to see if my kind offer was accepted I find not only was it rejected, but it seems to have been deleted (shocker). Not much of a Snake Eater after all, eh?
In the last comment on the short Smallwood thread, a thread which had quickly devolved into fantastic familial allegations about ‘bullying allies’, you will see as of this posting a comment (from his Mom?/Sister?) proclaiming: “bullying is everywhere!”. Perhaps Ms. Smallwood, perhaps. But it appears to be not nearly so widespread as intellectual cowardice. It’s to be expected under the circumstances I suppose. I have found that among the professions, the thick thinness of the skin is inversely proportional to the intellectual rigor required of its practitioners. [/snark ]

Update/Correction: Seems Smallwood's Got Game (Good on Him) 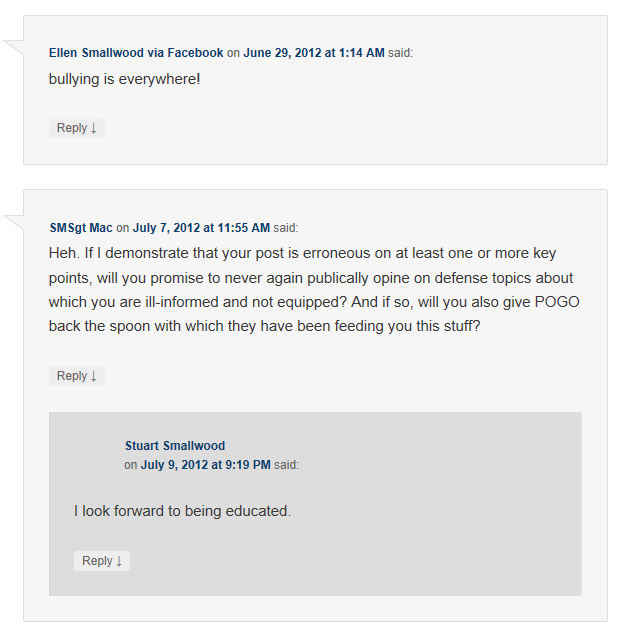 I take back half the things I've said already. If he chooses wisely...Well. we'll see about the rest later.
Which point will I select for debunking?  I'm leaning towards "the myth of stealth". Stay tuned.

On a More Serious Note

Catching POGO in their machinations could be simply left as a case of blaming others for what they are guilty of: akin to when a grifter gets caught in the 'act'. But in the war of words, POGOs moves are a cross between Rules For Radicals and at least one of the best military theorists.


“If your enemy is secure at all points, be prepared for him. If he is in superior strength, evade him. If your opponent is temperamental, seek to irritate him. Pretend to be weak, that he may grow arrogant. If he is taking his ease, give him no rest. If his forces are united, separate them. If sovereign and subject are in accord, put division between them. Attack him where he is unprepared, appear where you are not expected.”

Their biggest disadvantage is that they scurry like vermin when the light hits them.

P.S. Anyone else about had it with Blogger's formatting quirks?
Posted by SMSgt Mac at 20:30