The F-35 and the “Confused” Stephen Saideman

At first I thought Stephen Saideman’s blog post titled Lies, Damn Lies, and Gov't Statistics on his blog was merely more solid evidence that ‘Political Science’ involves little math and zero critical thought.
In the post, he linked to a CBC news web article titled “Competing cost estimates add to F-35 confusion”with this chart on it:
There was, of course, some rather unsatisfying journalistic distortion in the text, and there was also this chart:
He seems to now have doubled-down on the idea that Canadians were purposefully fed sunshine and butterflies on cost questions by writing an editorial for the Globe and Mail.

So to recap the story so far:
A ‘Political Scientist’ reads a rather dim news article (with some un-illuminating graphics claiming government ‘sourcing’ spicing up the page) pushing the idea that F-35 cost numbers being thrown about are ‘confusing’. He then blogs about same in a post titled “Lies, Damn Lies, and Gov’t Accounting”. Said Political Scientist then proceeds to write an editorial for the Globe and Mail titled “Unlike our allies, we glossed over the F-35's costs” .--And he did it all apparently based upon a rather limited awareness of the topic at hand. 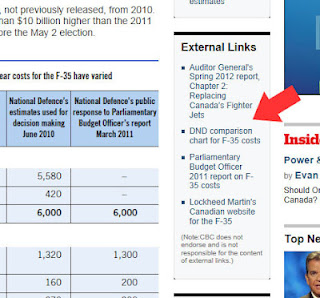 Ahhh, Research!
Now, we can’t prove or disprove my earlier concerns as to demands for math and critical thinking in PolySci, but I do think we have justification to suspect a deficit of research skills and/or reading comprehension at the root of the Professor’s confusion. For you see, if the good Professor had bothered to go just one step (literally one click) further to attempt to disambiguate the numbers, he would have had a good start on gaining insight into that which befuddled him. (See red arrow on graphic to left)


For IF the “Canada Research Chair in international security and ethnic conflict, Department of Political Science, McGill University” had bothered to click on a link provided at the first article he blogged about, he would have been taken to an official Canadian Defense forces website where he could view and download a more detailed breakdown of the high and low estimates floating around at the moment.
In the breakdown of costs at the link, he would have found such gems as the high ‘Parliamentary’ estimate for ‘Production’ costs has such problems as :
My favorite discrepancy between the two estimates has to be under the ‘Maintenance’ heading and I advise everyone to read it at the source.
Professor Saideman, who from what I can tell has been been a denizen of the Academic Ivory Tower (Social Scientists wing) his entire adult life, other than a stint at the Pentagon on essentially a one-year ‘career broadening’ tour as “Politico-Military Planner, Balkans Branch, Central and East Europe Division, Strategic Planning and Policy Directorate". Given his limited practical experience, it is unsurprising that he would find complex program defense acquisition and sustainment cost estimates confusing. Sadly it is also equally unsurprising that lack of consequential knowledge Aerospace or Defense Acquisition does not seem to provide him any inhibitions in giving in to impulses to proffer commentary on same to the general public.
Update: The professor has now posted another bit related to comments he’s received over at the Globe and Mail. Sounds like he’s getting heat from all quarters for his little ‘drive-by’. He has a nice little hand-waving at the end of it:


Anyhow, I am pleased that folks are interested in the topic and in my views on it, but I also realize that the folks commenting already have strong beliefs and see in my op-ed what they want to see. Not the first nor last we will be encountering our frenemy known as confirmation bias

Note: I did not even bother to deal with Professor Saideman's factual errors, such as claims that Japan has cut their F-35 order, because such errors are trivial in light of what is noted above. (Blogger paste errors corrected 4/19 in the AM.)
Posted by SMSgt Mac at 00:17