While I really don't have time for posting at the current time, I know a very few people who might be wondering what I think of the Presidential election, given that I thought the 'O'-Man was going to win, but in the spirit of HOPE! was hoping for a less-disappointing McCain 'victory'.
I'm still PO'd at Huckabee and the Brain-Dead Branch of Southern Baptists, as well as the weak-ass Republicans, who became weak due to the pathetic state of their rival Democrats - all are root causes of this tragic turns towards Socialism. But hey! - Like the title says "this ain't my first National Nightmare": I have memories of Clinton, Carter AND Johnson. It is just this gets more tiresome the older you get and the more you know this is just SO unneccessary.
On a lighter note, here's a challenge for the world. As far as I can determine, from this POV there were only four types of reasons that people had for voting for Obama: 1. Ignorant, 2. Irrational, 3. Stupid and/or 4. Evil. See if you can come up with a reason that can't be placed into one or more of those boxes. I just hope the majority were "Ignorant" - that can often be cured in time.
To get us through these dark days, Instapundit passed along this little poster that kind of says it all: 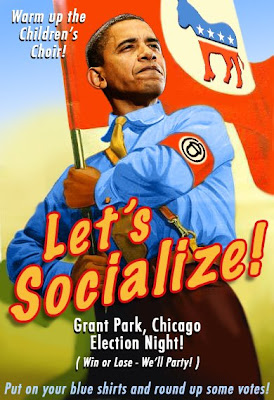