Sigh~Seems to be going that way...
Just another reason to want to live where I am a 'Citizen' and not a 'Subject'.

I visited my parents in England in the early '80s for a month on leave. The general quiet in a London that was relatively free of the Troubles (for a while after 1983) had not yet happened, so living with the idea that a bomb might go off at any time while in London was the norm for visitors. My parents were living out in the 'Shires where the threat was seen as pretty much non-existent. In London, it was all 'stiff-upper lip' and 'life goes on' as one might expect of a people who gave us Churchill and had survived the Blitz among other things.

That England is apparently no more. These days, it seems, if a 'Community Police Officer' thinks that taking pictures of Christmastime crowds is 'suspicious', and you choose to not identify yourself when asked (and evidently no answer is required by law)......then apparently that constitutes 'anti-social' behavior' (the definition of which is decided upon by policeman on the scene). Upon declaring that your behavior is anti-social, the policeman THEN can legally require you to answer with your 'particulars'.

The video at the link seems to be an interesting case study in how things get blown out of proportion as more people get involved in a serial fashion. Visit the link and view the video.

My take?
Most striking (I kid!), the first 2 out of 3 policemen in this video are quite attractive. Lovely Officer 1 is equally pleasant, (Community Police?) and the exchange with her is short and without event.... 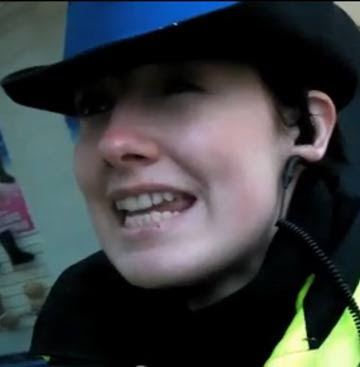 But she apparently follows some rule whereby if someone refuses to answer a question, she reports it up the line. A hapless cog in a Fascist 'system'? Cute as a button though...
Attractive Officer 2 (Constable it appears) comes in later at a different location. 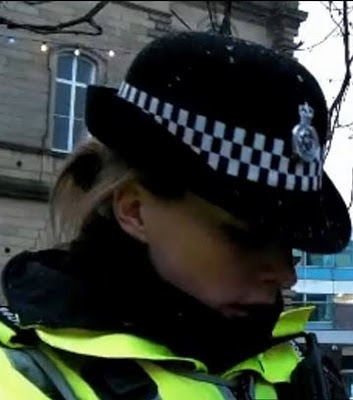 She's all business up front. She also appears to get quite resentful that someone is not being compliant and knows the law does not require it. She has trouble forming a response to the person she wants to question and who is repeatedly questioning her if he is free to go or is he being detained, all the while trying to think of any possible reason to require the 'interviewee' to answer her questions. Her hand gestures indicate to me she is experiencing some frustration, or does she have anger management issues? Never answering if she is detaining the man or not, the men with the video camera announce that they are leaving, then walk away.

The third officer strikes me as being at heart just another 'cowboy cop' that one runs into from time to time in the US (and as a rule on the TV shows like COPS). He is going to close the deal HIS way no matter what it takes. 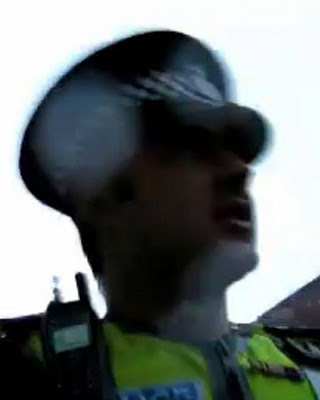 Is he this way all the time, or does he feel his manhood is on the line on a rescue mission of the previous officer(s)? Very polite...but his punkin' head was made up before he ever approached the 'suspects'.

I have no idea how this video plays in Britain, but in Texas, I think a case could be made to reprimand Attractive Officer #2 and fire Cowboy Cop #3.

Given that 'public photography' problems have occurred in the US (example), I've got a lot more faith that this will play out in favor of the individual and Liberty on this side of the pond.

'Allo 'Allo 'Allo! What's all this then?
It's called Fascism, with a couple of cute, and one happy, face.

Bill O'Reilly Knows Not of Which He Speaks

Just one of many reasons I am not now, nor ever have been, a fan of Bill O'Reilly. Too often it has felt like he has held the right position at the time, for the wrong reason or reasons.....and this isn't even one of those times
Posted by SMSgt Mac at 22:45 No comments:

President Obama, finally receiving pushback in his efforts to Socialize the United States of America to date, now seeks to subvert the only part of the Federal Government that is viewed positively by the American public: The Military. And it's all just to appease the radical 'homosexual activist' subset of an already small minority of the population. At Pajamas Media, I've posted my 2 cents, including reusing some point's I've made already earlier here and elsewhere:

The criteria as to what is acceptable in the military has not changed, nor should it to appease some tyrannical minority’s demand of not only acceptance but of ‘endorsement’. In the military, what delineates that which is acceptable conduct and behaviors from the unacceptable is how this this single question is answered:

Is it predjudicial to the good order and discipline of the Armed Forces of the United States?

DADT, while IMHO not a perfect solution, has worked because it focuses on conduct and behavior, and generally fits within the larger construct of required behaviors of all types.
All this bleating about ‘civil rights’ is rather limited in scope and focused on only the rights of that tyrannical minority don’t you think? Until separate sleeping and hygiene facilities that are provided in every possible field situation can be reasonably guaranteed to be equal to a heterosexual female’s vis-à-vis heterosexual male and vice versa — how will (insert heterosexual’s name here)’s sense of personal privacy and freedom from harassment be protected? Doesn’t (insert heterosexual’s name here) have as much of a right to not be quartered with a homosexual of the same sex as (insert name here) to not be quartered with a heterosexual of the opposite sex? (And isn’t all this PC gender-speak lovely?)

For the record, lest I (~sigh~once again) be accused of a being a 'homophobe'. Hardly. I am completely indifferent to it in my public life and the civilian workplace. Personally, I find the concept of 'exclusive homosexuality' itself to be in the grand scheme of things: 'pointless'. But that hasn't kept me from liking and respecting coworkers on their merits or not liking them and disrespecting them when warranted for a lack thereof.
Posted by SMSgt Mac at 14:37 No comments:

Heh.
I've been having a rather unproductive, yet sadly humorous, 'intercourse' over at the DEWLine with a 'true believer' on a mission. Apparently, I know nothing about 'persistence', UAVs, persistent UAVs, ISR, or Heaven knows what else.

NEW:
I am going to of course followup on this topic, but am working something more important for the next couple of days.

As a beginning, I think it would be helpful to first do a top-level characterization of the roadside bomb problem before we tackle any proposed 'solutions'. At first blush the challenge seems similar to a post-launch TBM neutralization scenario, but with an 'Assault Wrecker' model dynamic. I built Assault Wrecker (AW) about a decade ago for a grad school project and found AW helpful in performing several analyses after that. It is based upon the scenarios and model processes described in "To Find and Not to Yield". The model name is a play on the old 'Assault Breaker' concept: i.e. Assault Breaker on steroids. Read up a bit and try to guess how I'll apply old knowledge to the problem at hand.

But remember, according to 'some' I really don't know what I'm talking about.
Posted by SMSgt Mac at 17:30 No comments: