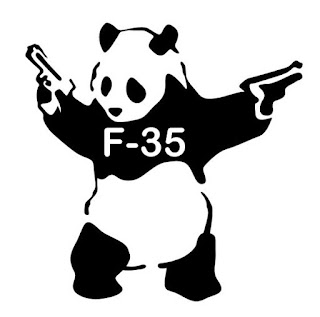 Reference in Title Explained
﻿
There was a poor article published at Business Insider (as if that is a surprise) on 18 April where the author did a mashup of an interview of a retired USMC Major and F-35 pilot with a bunch of factoids, a few facts, and...well, let's just call it a lot of  'other than facts', such as repeating the lie about the 2015 CLAW test being a 'dogfight' and claims like. 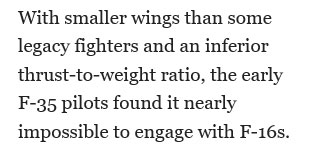 The F-35A's mid-mission T/W ratio is better than 1 to 1, good enough to have pilots saying that at typical WVR speeds it can out accelerate an F-16. The F-35A's wing reference area is greater than an F-16 so one presumes he was talking about 'wing loading' -- which isn't a big deal if you've got the thrust to overcome it. I would still dearly love it if some enterprising journalist ever asked how many thousand pounds heavier the early production F-35A (AF-2) with instrumentation is than the first production spec weight target aircraft that was built several LRIPs later. Because weight matters.

What the pilot, Dan Flatley had to say was pretty good and consistent with all the other feedback from the people who fly the F-35 are saying. I think it should have been made clear that his views as a syllabus developer were in no way relevant to the JSF program process and pace in opening up the control laws (the very purpose of that 2015 exercise and publically known a year in advance), but the BI author seems to tie the two together more than the pilot does.

Everyone in the test program knew the control laws start out conservative for safety's sake and over time as the envelope is tested, the control laws get loosened to get all the 'safe' performance out of a jet that possible.  I'd also want some clarifications, but that need comes from the author's mashup. One has to read very carefully to keep from mixing up what the author asserts and the correlations he draws on his own with the interview: what was actually quoted as coming from the Major. The author doesn't have the technical chops to draw the correlations he does make (see thrust/weight ratio), and to me, unless you already knew what was going on, the article just muddies the waters.

So as if that's not bad enough, we now have a sterling example of how perverted 'copypasta' will take  a poorly written article and turn it into a misquoted source. Compare the BI excerpt with an excerpt from a blogger posting opinions on the subject. Who the blogger is isn't important, what's important is what gets changed in the original story. 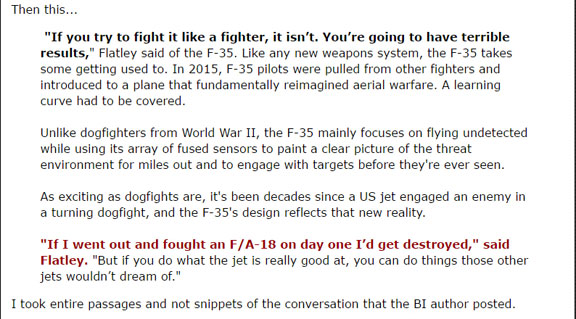 Ignoring the highlights in the second graphic, do you see what was changed and how the entire meaning of the passage was changed with it?
.
.
.
(intermission)
.
.
.
In the original, Major Flatley states:
"If you try to fly it like the fighter it isn't, you're going to have terrible results."

In the copypasta, the blogger quotes Flately as stating:
"If you try to fly it like the fighter, it isn't. You're going to have terrible results."

I hope there's no need to explain how, why, and what meaning has been lost in the translation there.

The blogger then builds a whole rant based on a misquote he made in the transcription. I do not believe this was intentional, at least I hope it wasn't. BI doesn't allow simple copy/paste using at least some browsers, including mine, so the transcription was probably manual and prone to human error. But I have to believe preconceived notions caused the mistranslation from one site to the next. Why?
To make that kind of error, it seems you would have to want it to be as you perceived it to even want to post about it in the first place.

Too good to check

The saddest thing is, I checked the comments (69 at the time) and not one person called the blogger out on the error. Almost certainly for most it was because the error reaffirmed their own world view, and the rest seemed to just take it at face value that the quote was legit and correct, whether they agreed or disagreed. This is how B.S. thrives on the web.

Note: I found the blog post with a search engine while looking for the BI article. It was at a site I used to frequent and my curiosity was piqued. Considering the time of night, I shouldn't have bothered in retrospect.
Posted by SMSgt Mac at 23:47 2 comments: