"Buzz-Job".
1. Noun: A colloquialism for what happens when commercial military-oriented websites  "disappear" their mistakes down a memory hole instead of acknowledging them.
2. Verb: The act of erasing an e-publishing mistake on the internet in leiu of admission of same.

Usage: "Hey! They just pulled another "Buzz-Job" by posting that lame article called "Phantom Bombers Weigh Down Military Budget" and then pulling it without comment."


The "Phantom Bombers Weigh Down Military Budget" that, apparently, "aren't".

I'd link to the 27 December DoD Buzz article by Michael Hoffman that has the title as in quotes above, except it isn't "there" anymore. (Update: See end of this post for a link to Hoffman's 'do-over').

I noticed the link to it was missing from the DoD Buzz main page on the 4th of January. Thinking I must have incorrectly remembered where it was , I went looking for it elswhere. Nope. It WAS on DoD Buzz as the screen capture below of the 'Google cached' version then showed: 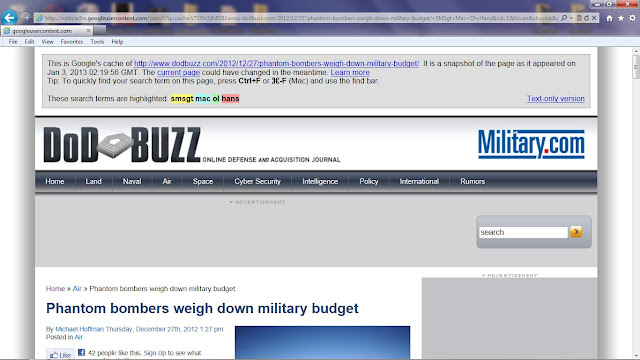 At the time, Google showed over 1500 hits for "Phantom Bombers Weigh Down Military Budget": 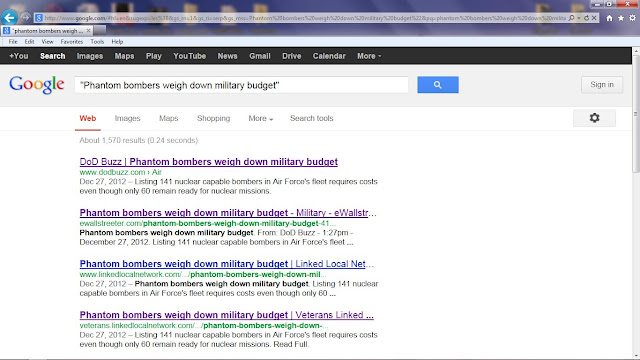 Here's a screenshot of the article as it was when it was 'disappeared'. 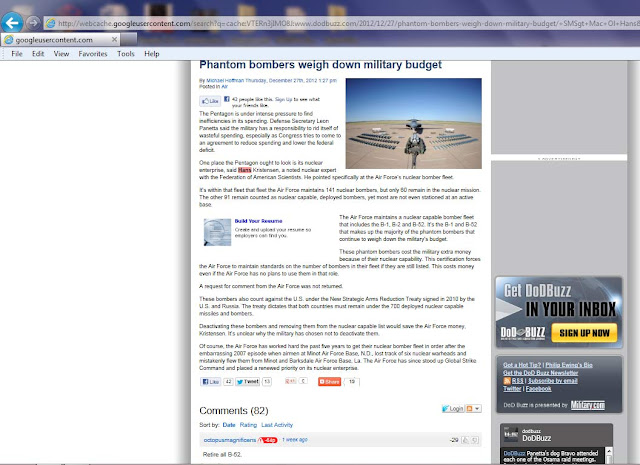 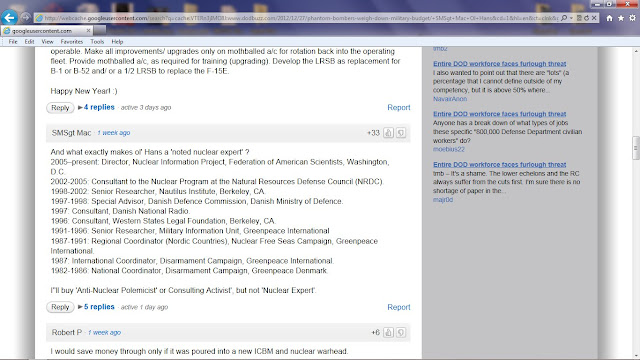 As of 6 January, the Google 'cache' link leads us to: 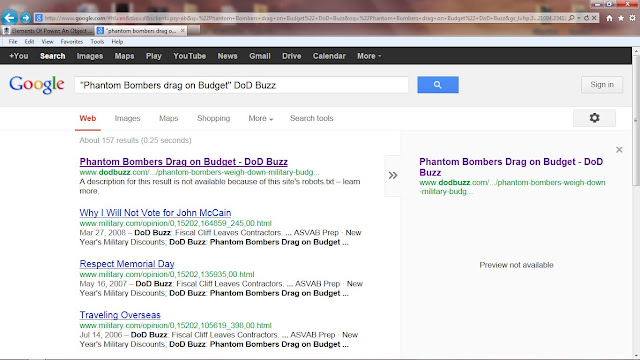 No preview available, and no web bots allowed. Tsk.

So the article is REALLY disappeared now. Except of course for the screenshot above.

One of the few merits of having a printed 'press' is the inherent accountability from not being able to recall their mistakes once distributed. The inverse of the same is the great scourge of e-journalism. They can make mistakes, relay falsehoods and publish propaganda press releases as 'news', complete do-overs, or even just lie.

They can do these things because in the end they can always just pretend it never happened if they can 'pull' the offending piece... and nobody notices.

Hey! Just checked again and DoD Buzz's Hoffman now has a ''Do-over" article up. In it he acknowledges his earlier 'mistake' - something I wish more journalists would do. I still think a correction to the original would make a better audit trail.

The proof is in how TODAY a woman came to be disarmed after firing her revolver six times at an attacker, hitting him five times. She decided she had to flee before the attacker figured out she was out of ammunition.


The incident happened at a home on Henderson Ridge Lane in Loganville around 1 p.m. The woman was working in an upstairs office when she spotted a strange man outside a window, according to Walton County Sheriff Joe Chapman. He said she took her 9-year-old twins to a crawlspace before the man broke in using a crowbar.

But the man eventually found the family.

"The perpetrator opens that door. Of course, at that time he's staring at her, her two children and a .38 revolver,"

Read how it all went down here.


What if she had stayed in the house?

It would have been a race against time if she had stayed: would he have realized the chambers were empty before he lost consciousness if she had stayed instead of running to a neighbor's house?
She shot the intruder with a .38 caliber revolver (example of common type) . Since 4 if the 5 hits had exit wounds, I'd guess they were shot at close range and/or were +P ammunition.


What if there had been two or more intruders?

She would have been out of luck, ammunition, and ideas.

This is also a lesser object lesson in  management of ammo consumption. Something extremely difficult to do unless you consciously train for it in the long term, and unless you are one cold-blooded sociopath, adrenaline will probably overwrite the training the first time you need it.

In a firefight, no one EVER wished they had fewer rounds of ammunition. 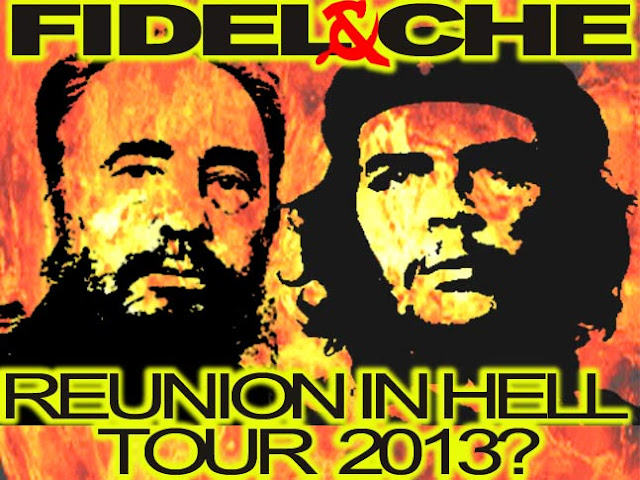