And maybe a few prayers?
Well the CV-22 has performed its first self-deployment. In honor of the milestone, here's a patch I got from the SPO (Test Force?- can't remember which) waaaay back when my unit supported the program. Although I don't think the stuff we tested went beyond proof-of-concept (yet)- it is good to see the AF special operators moving quietly forward. 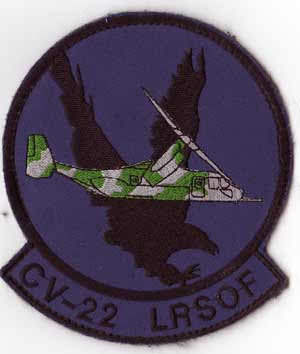 There is an OUTSTANDING new RAND publication out. An "analytical memoir" by retired Lt General Glenn Kent titled: Thinking About America's Defense.
I predict it will become a RAND classic - a philosophical guide for defense analysts and tool kit in one document. I'm only about halfway through it and so far it does not disappoint. Here's a gem with a little bit of background from page 173 for all the lightweight-fighter-mafia-as-martyrs crowd:

Soon, Maj Everest Riccioni, one of Major Boyd’s followers, was in my office with the LWF briefing in hand. After a lengthy discussion in which he presented the briefing to me, I stated that I would urge General Meyer to hear a briefing about the LWF, but not the briefing Riccioni had just shown me. “There are two distinct parts to your briefing,”

I said. “The first part states that technology marches on and the Air Force can have a fighter with impressive performance at 60 percent of the cost of an F-15. The second part of the briefing alleges that those who support the F-15 lack a basic understanding of air-to-air combat. I will recommend that General Meyer receive a briefing that sticks religiously to the first part and contains not a hint of the second part.

General Meyer supports the F-15, and he needs no instruction from you (or anyone else) about the practice of air-to-air combat. After all, he was the leading American ace in the European campaign in World War II.”

Major Riccioni protested. I pointed out that he was negotiating from jail. The easiest and least risky course for me was to tell General Meyer he should not hear the briefing. I insisted that I would only endorse a briefing that reflected my view of what was constructive, repeating that it would convey only material from part one and would not include a hint about part two. In time, Major Riccioni saw that he was in no position to argue, and together, he and my staff developed such a briefing.

I wrote a note to General Meyer and urged him to hear the briefing. He promptly made it known to me that I had failed him. “All right,” he said. “I will hear what this major has to say. But I hold you responsible for the whole affair.” A date was set.

Late in the afternoon the day before the appointed date, I was called out of town. Every instinct told me to cancel the briefing, but it was hard to get on the calendar of the vice chief, so I did not call to cancel. I did call Lt Col Larry Welch (who worked for me) and Major Riccioni to my office. “I trust you, Major,” I said. “I won’t be there but I trust that you’ll stick to the script we have developed: just part one, nothing from part two. Do not even take those other charts in your briefcase.” Major Riccioni agreed.

I told Colonel Welch that I would call him at his home when I returned the next day. When I called him I asked, “How did the briefing go?” “It was a disaster,” Larry replied.

Read more of the before and after here.