The IFPTE today released a so-called 'report' on the KC-45 contract award.

It isn't flattering to either the AF or Northrop Grumman (surprise!) but it is full of, and let me say this as delicately as possible: Crap. The same capital "C" Crap we've been hearing all along packaged not all that differently than it has been to date.

The press release that came with it is a hoot, with such horse nuggets as:

In the report, IFPTE finds that the USAF "hit a trifecta" in awarding the contract to France-based defense contractor EADS and its minority partner Northrop Grumman -- choosing the "more expensive, less capable aircraft in a manner that undermines our free trade laws."

"There is growing consensus on the political left and right that the tanker decision is a poster child for the fleecing of America."

Wow. Among other transgressions, the labeling of Prime Contractor Northrop Grumman as the 'minority partner' (an absolute LIE) is STILL in fashion I see.

So what is the motive for this 'report'? Civic mindedness?
Hardly.
Let's look at a couple of excerpts from a CBS News blurb appropriately titled "More Tanker Trash Talk " that came out yesterday warning us of the impending release of this pap:

The brainstorming session and the white paper are aimed at motivating union members to stay on top of grassroots lobbying efforts, said Paul Shearon, the union’s secretary treasurer.
and ...
Members of the union were disappointed with the outcome in the House, said Matt Biggs, legislative director for the union. At this point, they are pinning their hopes on key appropriators – Washington Democrats, Sen. Patty Murray and Rep. Norm Dicks, and Kansas Republican Rep. Todd Tiahrt – to cut funding for the tanker program.

LOVE that last point. I guess we now know what is really important to the IFPTE leadership.....and it isn't National Defense.

The CBS News piece closes with:

The union’s white paper is bound to rankle opponents and provide fuel for pro-Northrop blogs, providing 10 pages of arguments about why the Boeing KC-767 would have made a better replacement for the Air Force’s Eisenhower-era tanker fleet

Update! 1912 hrs Central
Not just 'pro' KC-45 blogs have noted the problems with the 'report'. Check out a point by point rundown on the IFPTE Turkey at industry analyst Scott Hamilton's website here. Thanks to Mr Hamilton for saving me a lot of time and effort of doing the same!
Posted by SMSgt Mac at 14:01 1 comment:

Sometimes it's better to buy a winner than build one.

Defense Tech has the scoop on "Boeing's" Hummingbird breaking its own rotorcraft endurance record. The record was 12.1 hours. It is now 18.7 hours!

In case you are unfamiliar with the state of rotorcraft art, the Hummingbird is about the only thing that can beat a tiltrotor in category of being called truly 'advanced' among rotorcraft now flying.

The constant regurgitation of Boeing talking points in comment threads at DefenseTech and elsewhere has prompted me to go ahead and provide this Northrop Grumman brief that I received last month from a Lockheed Martin source.

I am assuming this was the same brief for which NG offered to give me a backgound briefing. I declined NG's offer on the grounds I prefer to use open sources that everyone can access as much as possible, and I had this brief in hand already. Since I got this brief from a LockMart contact, it has obviously been widely disseminated so I guess it is alright to pass along some excerpts as 'public info'. It’s a pretty good representaton of NG's case and one slide in particular provides a good counterpoint to Boeing’s earlier ‘selectively- released’ scoring data in their serial protest ‘summaries’. The brief has also been out long enough that if Boeing had anything in their quiver to shoot at it I’m sure we would have heard about it by now (Shrinking violets they are not). 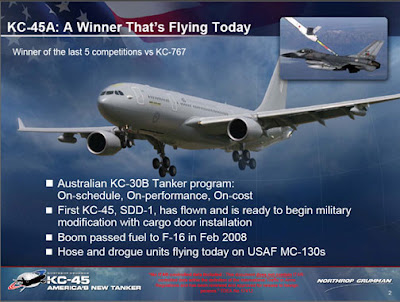 A little reminder that the NG/EADS team is meeting commitments and is on schedule as compared to... guess who? Boeing has been trying to make a little hay out of the boom flight test progression lately. Of course, the program is still working to schedule according to NG, and would it be too obvious to remind everyone the purpose of "test" is to find problems and fix them before they are fielded? It’s easy to shoot at a target when you don’t have anything for the competitor to shoot back at, I guess.

Next we have my favorite slide (because it has the most REAL data) : 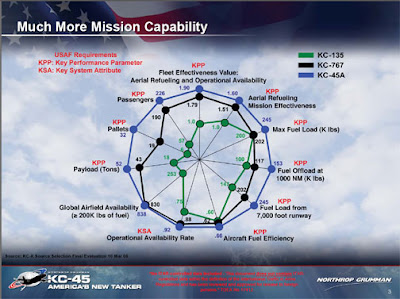 ‘Radar’ charts rarely work well in conveying info because people can be easily confused by chart formats they are not used to seeing and they contain more info on one chart than most people can assimilate easily. This is an exception and is an extremely good use of the type that would not have worked well if the KC-45 had not equaled or exceeded the KC-767, and the KC-767 not bested the KC-135 in every category (that would have involved crossed lines). Looking at the chart, the factors are in general order of priority beginning at the 12 o’clock position and going clockwise around the chart. It could be said to be slightly ‘biased’ of course, because it holds the KC-45 bas the norm and the visual impact emphasizes the differences between the KC-45 and the other two aircraft. If one wanted to emphasize how the competitors stacked up against the KC-135 they were vying to replace, the chart would have held the KC-135 as the norm and looked like this: 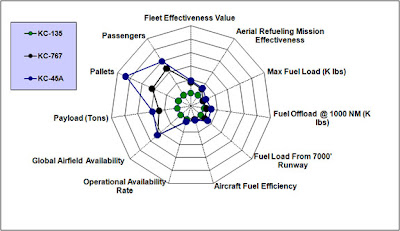 Relative scaling in the chart above seems to mask the true scale of differences in the more important factors, but clearly shows how superior the newer tanker contenders would be (with KC-45 being BEST) in the areas of pallets and passenger loading. What would just the first six factors (the ‘refueling factors’ if you will) look like without the other factors? Glad you asked. Here's a 'tanker' capability oriented chart of the same data: 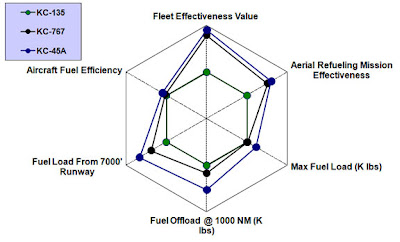 This shows how much better the KC-45 was in ALL refueling factors. To me, the impressive thing in the relative grades was how the KC-45 beat the competitor in EVERY category. It is usually extremely difficult to optimize a platform such that the Customer gets everything they wanted and more. I also believe it is probably more a case of serendipity falling out from optimization of the A330 for a particular niche in the commercial airliner market that makes the KC-45 design the superior one. Sometimes you just get lucky, and the NG/EADS team seems to have worked from the position that you make your own luck. In short: they were apparently lucky AND good.
There’s lots of job claims and esoteric stuff in the slides as well but I just want to show three of the remaining slides because I personally find them interesting. Here’s Slide 5: 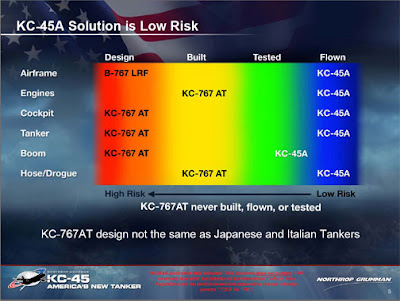 Slide 5 is a little selective in the categories, but I think follows the risk items for this program fairly well. What it really emphasizes is that there is no better risk reduction than actually building something to show the Customer you can actually do it. It doesn’t require much, if any, imagination to see one competitor had more manufacturing risk and the other had more technical risk: pick which would worry you the most.

I’ve included slide 8 for two reasons. One, it shows just how ‘international’ commercial aircraft programs have become and two, it shows a little factoid of unknown provenance asserting that Boeing’s unions assert there is actually less US content in the B767 than Boeing claims. Again, I hear no refutation on the airwaves from Boeing. 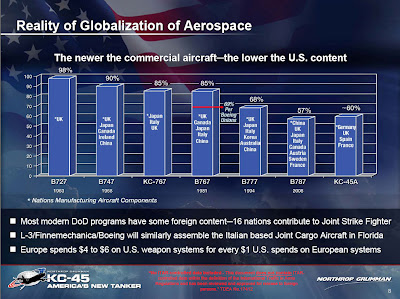 Slide 9 I like because it shows who builds what for the B767. I don’t really care, but it is sad to hear Congress-folk lamenting ‘French’ airplanes (that aren’t) while ignoring Chinese content in Boeing’s contender. As fickle as the French may be at times, I submit they are still more reliable than China. 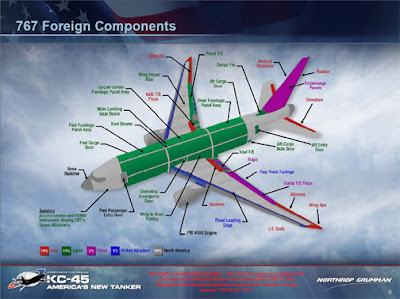 Why 'Protest' Boeing? Why?

DefenseTech offers an explanation (which reads oddly similar to my earlier analyses and conclusions) as to why Boeing is really protesting the KC-45 contract award.
P.S. In the comments I make a minor point or two.
Posted by SMSgt Mac at 20:34 No comments:

A Message From Far Away 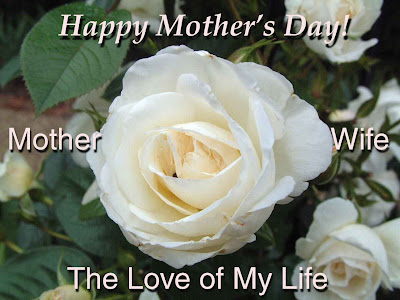 Road Trip!
(Click on one for a larger image)

So. When the heck did they put the Bird Cuisinarts in East of Snyder? 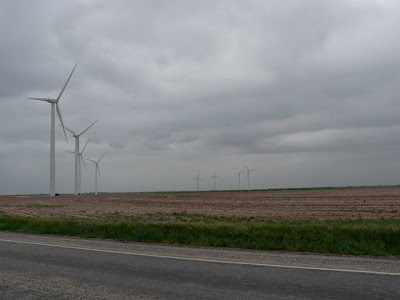 There was a tornado reported in this Thunderhead over Roswell, NM. 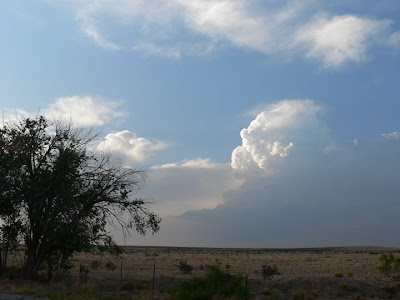 Saw well over a hundred head of deer in groups of 5 to 20 on the road up to Cloudcroft. At least I didn't come close to hitting an elk this time..... 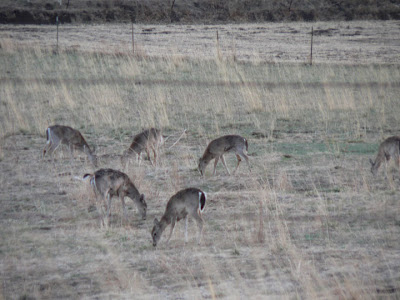 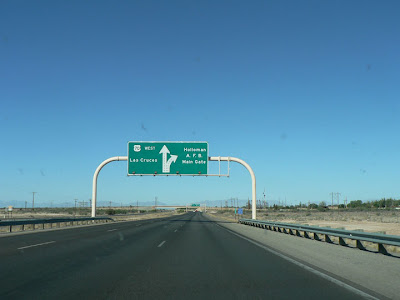 Head West! Passing a train at the Continental Divide. 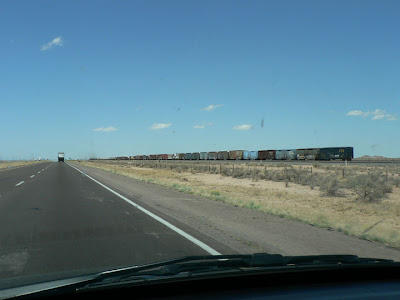 The bookcases are DONE! 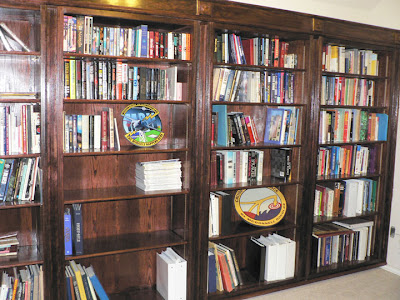 Nearly 70 linear feet of shelf space. Good thing I separated my research materials for my current project from the other books or this wouldn't have been enough. Next up, paint and hardwood floors (someday).
Posted by SMSgt Mac at 20:56 No comments: