This is not good.
I'm kicking myself now for not saving an old OSD web page where Philip Coyle as Director of Operational Test and Evaluation demonstrated an absolutely superficial understanding of the Kill Chain in making his case for universally requiring Live Fire Testing without allowing for opportunity cost impact variations by program. The guy's intellect is consistently hamstrung by ideology.

Now we have an Obama Administration nominating a long-time missile defense critic to run missile defense. Hey! What could go wrong? Nothing that isn't intended by the subversives in charge, that's for sure.
Posted by SMSgt Mac at 23:23 No comments: 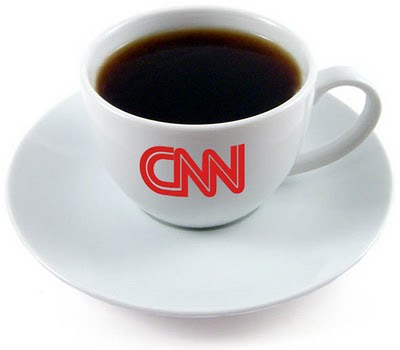 I've got a little lull in the workload at the moment (only working partial weekends) so I, though it would be a good time to start following up on a previous post concerning the military concept Persistence, how Persistence relates to IEDs/EFPs, and more specifically what can be done to attenuate the placement and detonation of these 'weapons that wait'.

In this post, I present the general processes an enemy could use to employ what has to be their current weapon of choice. The processes shown are not designed to be all inclusive: They are general enough to capture all the relevant concepts, but are also specific enough to allow me to efficiently propose how and why the enemy's behaviors can be shaped and IED/EFP deployment and effectiveness attenuated (no threat can be completely eliminated).

The employment of Weapons That Wait (from this point forward they will be referred to as WTW) I have broken down into two sub-processes: 'Acquisition' and 'Employment'. There were a couple of other ways I could have broken things down, but these will serve my greater purpose. If the enemy does not have a weapon or weapons in hand, they have to first get their hands on it/them.

Now for the less obvious. I have chosen (there are other ways) to break the acquisition process down as follows: 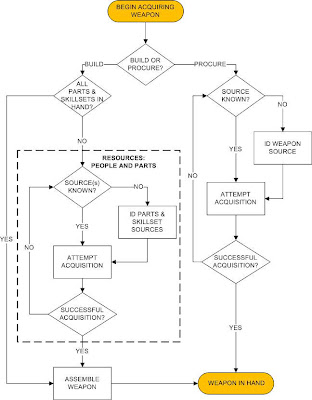 The enemy, once they have a weapon in hand, must complete the Employment process. That process I have chosen to break down as in the flowchart below. (Note: sub-processes of both the Acquisition and Deployment processes can be conducted concurrently but are, obviously, completed sequentially.) 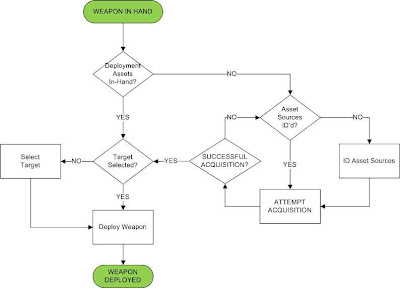 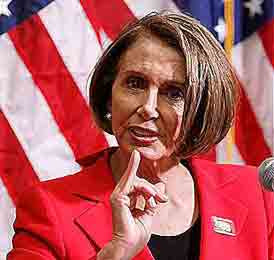 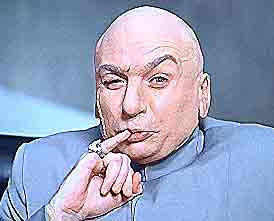 Did his licence plate read "RU Verde"?
Michael Fumento lays out the story behind the story on that 'runaway' Prius in the People's Republic of California last week. Now, I can't stand hybrids (they offend my engineering and design philosophies) or your stereotypical hybrid drivers as much as anyone, but this event was suspicious from the 'get go' because it did not match up well with verified events and failure modes to-date.

So we can now point out that this 'fake' Pruis story was leveraged to promote fake concern among 'some' in Congress....which Forbes is on top of as well.
Posted by SMSgt Mac at 12:20 No comments:

Northrop Grumman has declined to recompete for a contract they had already won - as I predicted in the comments here. (Not that it required any of my special mojo powers this time around).

Since the comment at the link may disappear someday, here is what I wrote on February 10th:

I realize that here and elswhere there are the proverbial ’some’ who view NG’s statements that if the RFP doesn’t allow them to be competitive that they won’t bid to be merely angling for an edge, but I would take it at their word. Read the bio of their new CEO. He’s Capital B ‘Business’. He’s not an ‘airplane’ but a ’space’ guy, so there is no ‘romanticism involved and this is a contract that they’ve viewed as already spent a good chunk of money pursuing and having won once only to have it ’stolen’ by political shenanigans. If there was ever a contract a company could expect no long-term customer-relations fallout of
‘no-bidding’, this is it. NG has every reason NOT to waste the effort if they think the ‘fix is in’ (again).

Forbes gets to the bottom line right away.
Posted by SMSgt Mac at 01:40 No comments:

And Max Boot then Glenn Reynolds take issue with it.

Even a University of Tennessee Law Professor finds Gen Merrill McPeak 'unpersuasive'. (Even though the General for once in his political-military career is on the right side of the argument)

I would also ask Max Boot how those in today's military could gauge the 'corrosiveness' of women on the battlefield? Since none serving (active duty anyway) can remember what it was like before modern times - back when women were relatively scarce in the military?

I'm reading Thomas Sowell's Intellectuals and Society at the moment, and there's a lot in the book relevant to most major modern societal issues. I would commend it to Max Boot and Professor Reynold's: especially as it concerns the observation that societal norms are not the product of ignorance and inattention, but the product of systemic processes.

Systemic processes can bring into play more knowledge for decision-making purposes, through the interactions and mutual accommodations of many individuals, than any one of those individuals [participants] possesses. (p.16)

Max Boot, in his Commentary Contentions article trots out the old 'other militaries are doing it' argument [Did Moms stop using the Socratic "if everybody else jumped off a bridge would you do it?" stopper after my generation?]. He then goes off the deep end:

One would think that the presence of women would do even more than the presence of gays to undermine “male bonding.” Yet women have been granted admittance into almost all military occupations, in roles including flying fighter jets as McPeak once did. They are present on all major and most minor bases even in war zones. They frequently and regularly circulate on the battlefield in Iraq and Afghanistan. What evidence is there that their presence has undermined combat effectiveness? And if it hasn’t, why would the presence of un-closeted gays be more corrosive than that of women?

'Evidence'? Hmmm. I'll answer his first question, which will dispense with the second.

First it must be recognized that such 'problems' are real and ongoing:

Some shore commands in the Norfolk, Va., area report that up to 34 percent of their billets are filled by pregnant sailors, and commanders are complaining about a “lack of proper manning to conduct their mission,” according to a Naval Inspector General report.

Second, it must be recognized that there is evidence that, I assume for politically correct reasons, such information is routinely suppressed or played down, it has been going on for years, and is a current problem.

I'm not picking on the Navy here: it is just a more obvious problem when you are structured to live, deploy and fight in geographically discrete units (aka 'ships'). The problem is one that affects all the services to varying degrees.

I enjoy the writings of both Max Boot and Professor Reynolds: they both have pretty good instincts, but they are both wrong on on repealing "Don't Ask Don't Tell". I am guessing both Professor Reynolds and Max Boot view this as some sort of 'equal rights' issue instead of a military effectiveness issue. It would help both of them to recognize the military as a unique sub-culture in America, with unique limitations on civil rights, freely acknowledged by its members in taking an oath and accepted for the duration of our service.

I would only add that I find Max Boot's attitude somewhat irritating, but only because he suffers from the same shortcomings found in so many of those analysts and historians that are involved with the military, but are not of the military: not a part of the continuum of "systemic processes" that "can bring into play more knowledge for decision-making purposes, through the interactions and mutual accommodations of many individuals", over two centuries of the American military experience.

This is not a case of 'special pleading'. I assume ALL subcultures within the greater American civilization have systemic processes that have evolved and are unique to their groups (why would they not?). I claim no insight of any to which I do not also belong. I merely insist others do not claim relevant knowledge of mine in return.

P.S. Recommended reading on Women in the Military: Coed Combat
Posted by SMSgt Mac at 14:24 No comments: 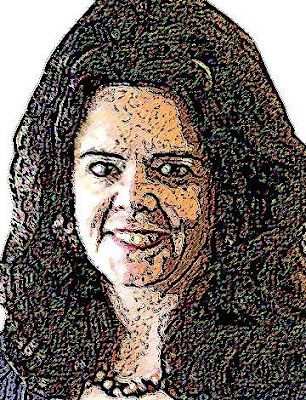 Beth Fouhy
Or is this article her AP editor's fault?
Ignoring the cynical tone oozing out of the article covering Karl Rove's new book (it is to be expected I suppose) what I absolutely cannot abide is paragraph four:

"In the run-up to the war, Bush and his national security team, including Vice President Dick Cheney, attempted to link Saddam to the attacks as a way to build support for the invasion."

In an entire piece otherwise devoted to what Karl Rove wrote in his book, paragraph four sits there: detached from the rest of the article. It is the only paragraph without reference to Rove or his writing, and it is a complete lie, gratuitously dropped in the article like a turd in a punchbowl.
Ms. Fouhy, are you stupid enough to actually believe what you wrote? Were you merely incompetent in accepting the assertion without reflection from some less-than-reputable source? Or did you know better but threw it out there as a lie because you wanted it to be true?
Alternatively, was the paragraph just slipped in by an uncredited editor for any/all of the reasons above? What IS the explanation? Is the AP still trying to rewrite History?
It won't work. Here are a couple of examples why:
2003 Bush: No Iraq link to 9/11 found
2004 Cheney blames media for blurring Saddam, 9/11
Interestingly, what you WILL notice is that within just about every credibly-sourced news article on the subject between 2001 and today (including those linked above), is the assertion that while the Bush Administration never claimed a linkage between 911 and Iraq, they “implied” or “hinted” or “gave the impression” that there was a link.
Big Media would like you to believe it was the Bush Administration ‘linking’ Saddam and 911, but a review of the reporting shows us that it was Big Media doing all that hintin’, implyin’ and impressin’-- and this hardly a revelation at this late date: Polls, not Bush administration, helped shape Americans' bias against Saddam.
Posted by SMSgt Mac at 01:38 No comments: