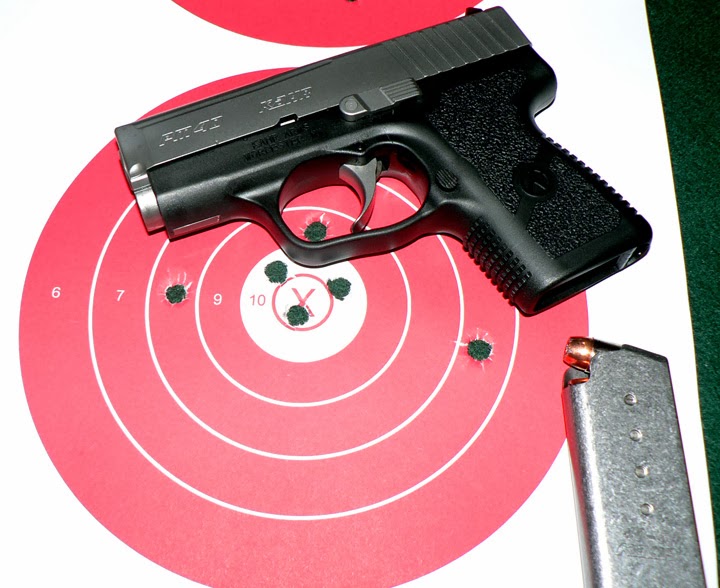 I’ve been wanting to post a short ‘practical’ (versus esoteric) review of my current ‘first choice’ among my carry weapons for bit, but as regular visitors know I have been ‘busy’.

During the latest gun/ammunition ‘scare’ I got tired of not being able to find either 9mm, or, especially .380 Auto ammunition (practice and defense). And the .380 is far more expensive to shoot to begin with. I like to keep a ‘comfortably’ proficient skill level, and you can’t practice shooting what you can’t get ammunition to put in it first. During the ‘rationing’ I noticed that two calibers in particular were always available: .40 and .45.

As “concealability” and “controllability” are co-equal in my mind, I ruled out the selection of small .45s, though I did hold up making that decision for a while until I could try out the Springfield Armory XDS. I shouldn’t have waited: the gun felt like a brick to me. Being left-handed, it also required too much opposite-hand manipulation for my taste.

The .40 cal ammo NEVER had the price spike, or empty shelves due to rarity where I live. In addition, the .40 caliber rounds stayed as cheap or cheaper as the 9mm before the run on ammo.

I wasn’t looking for a Kahr, but I found one.

I liked the way it fit my hand, always the first test a weapon has to pass. I found I could work the slide catch with a knuckle of my left-hand trigger finger while pulling the slide back with my right hand (we lefties adapt to the right-handed world). A real plus was the 'rightie' magazine release was positioned perfectly: In no way will I accidentally drop the magazine with even the tightest grip.
I read up on other's experiences with the Kahr and some were not very encouraging, but I liked the gun enough to give it a try, and already had an idea or two about what I would do if I experienced the same problems others had. As an engineer who had a lot of wrench turning experience, and have handled a lot of the older weapons, I understand that anything mechanical is subject to a ‘break in’ schedule.

I was intrigued most about the promised accuracy of the PM40’s barrel with its polygonal rifling. The barrel is also ‘crowned’. The polygonal rifling makes the inner diameter look like it was shaped by pulling a small stop-sign through it while twisting the sign all the way. There’s no real rifling in the conventional sense, just a twisting octagonal shape. It is said to be a ‘match target’ barrel compared to the less expensive CM40 with its conventional rifling –and based on my experience to date, I believe it.

OK, that’s ‘esoteric’ enough. I only mentioned the barrel specifics because I really do think it makes a difference. As does the DAO trigger, which only ‘feels’ DAO on the first round. All pulls for the remaining rounds are particularly smooth. Not as smooth as my Walther, but the Kahr is easily ‘second place’ in trigger pull category for what is in my gun safe. I really like the standard “drift adjustable, white bar-dot combat sights”. They’re very good in all but the lowest light conditions. I can get my sight picture very fast: just “dot the i”.

It runs most  of the .40 caliber ammo, and all of the defense rounds I’ve tried without difficulty, but I avoid the particularly wider-faced ball ammo, because it’s a tight fit for the offset feed ramp. Not a problem, I have a lot of different suppliers to choose from. 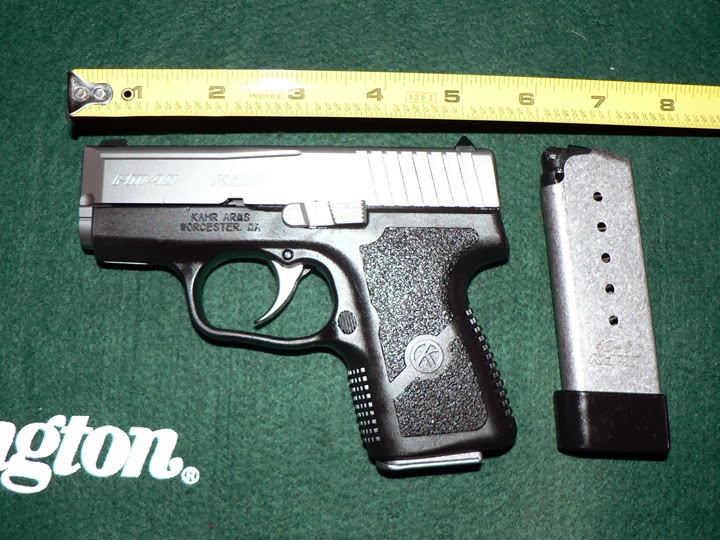 I really don’t like the ‘extended’ 6 round magazine. After the last round is fired, it is hit or miss as to whether or not the follower will come all the way up to lock open the slide. Needless to say, I don’t carry that mag—it is “range use only” until I ‘solve’ it. Besides, I don’t like the extension for concealment reasons. The extra bulk is not worth just being able to reload one round later. I had to de-burr a little bit of obvious metal off one of my 5-round Kahr mags (made in the USA!). Every other kind of malfunction has disappeared after about 200 rounds had been fired through it. This gun, unlike the Walther, had to be broken in. But it was worth it. 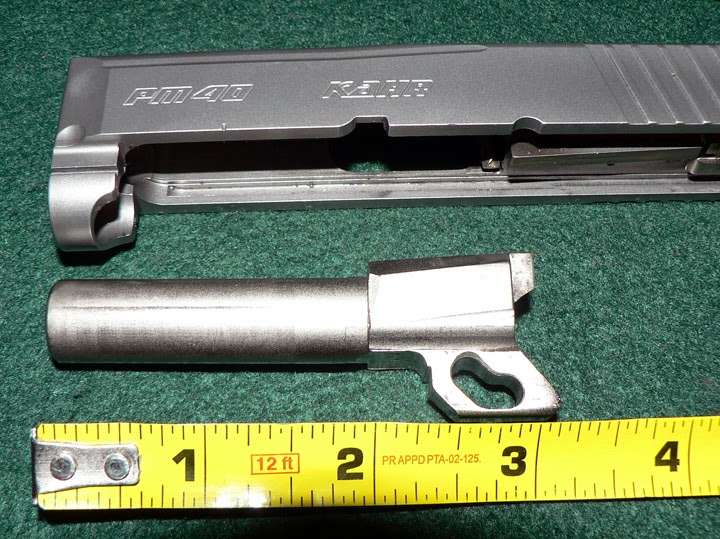 2. I use an UpLula mag loader for the Kahr, because the magazine springs are stiffer than any gun I’ve ever seen. The first time I put a couple of hundred rounds downrange my fingers were sore afterwards. I’ve never had that happen before, so I got a loader for the next time. Kahr suggests inserting a small punch or screwdriver through a hole in the side of the magazine to restrain the spring during disassembly--you will still deal with flying parts if you are not diligent.

3. Without the extended magazine, this weapon is very compact (~5” long). I can carry it comfortably in any pant pocket that I can carry my .380 TCP.

4. Charging the weapon reliably requires technique. Once I figured out you have to really slap the slide back, I've had zero miss-feeds charging the weapon. The recoil spring is incredibly stiff like the magazine springs.

5. The only thing I’ve done different for pocket carry compared to the little TCP, was I put a wrap of Kydex, shiny side out, around the Uncle Mike’s ambidextrous pocket holster to stop ‘printing’ in certain pants (jeans) when I sit down. I had planned to ‘rivet’ where the Kydex practically touches, but the shape holds the holster all on its own and only comes off if I pull it off. The other side, not shown, is of course ‘flat’ and from the outside, it looks more like my phone in a pocket than my phone does. 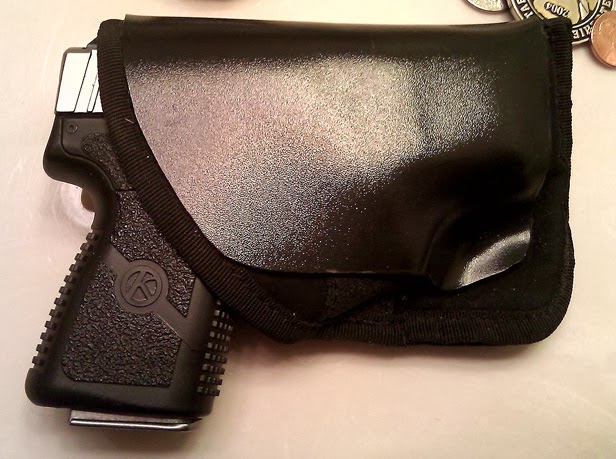 6. The gap between the magazine and the bottom of the magazine well bugs some people, It doesn't bother me a bit. The stop is positive: you know when it is seated.

Better than I do. I’m not one of these internet zero-MOE shooters that seem to populate every corner of the virtual world. I suppose I could be if that was all I wanted to ever do, but I don’t. I just want to shoot with less than one ‘human-minute-of-error’.

The Kahr does that for me. Doing ‘slow fire’,  even before my eye surgeries, I could cut 10-ring sized holes out of stuff at 7 yards. (You HAVE to slow-fire at 3 yards because the muzzle blast blows the hanging target horizontal every time.) After the Chief and I did some basic target practice (she had a marksmanship class last term) I wanted to do some rapid fire (defined as 'shoot as soon as my sight picture is reacquired') practice. I loaded up the 6 round magazine and shot two 3-shot groups with a correcting pause between them at a series of six targets. Here’s a pic to give you an idea of the sight picture. 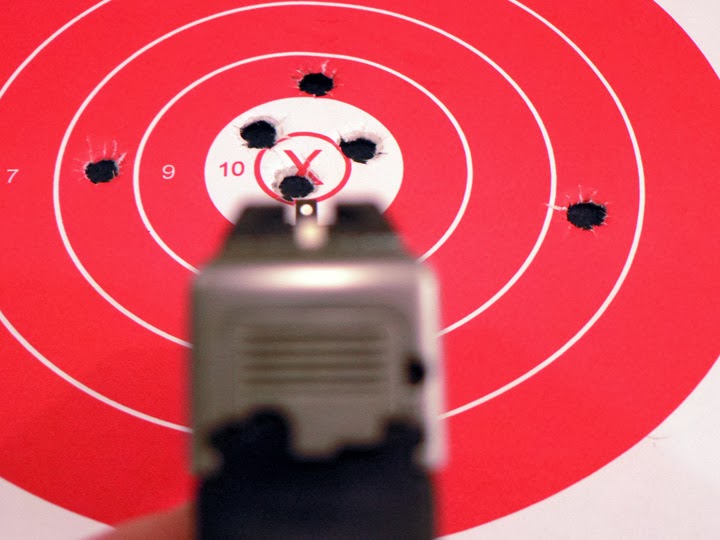 This was six magazines shot from 7 yards at 6” targets in the order numbered. 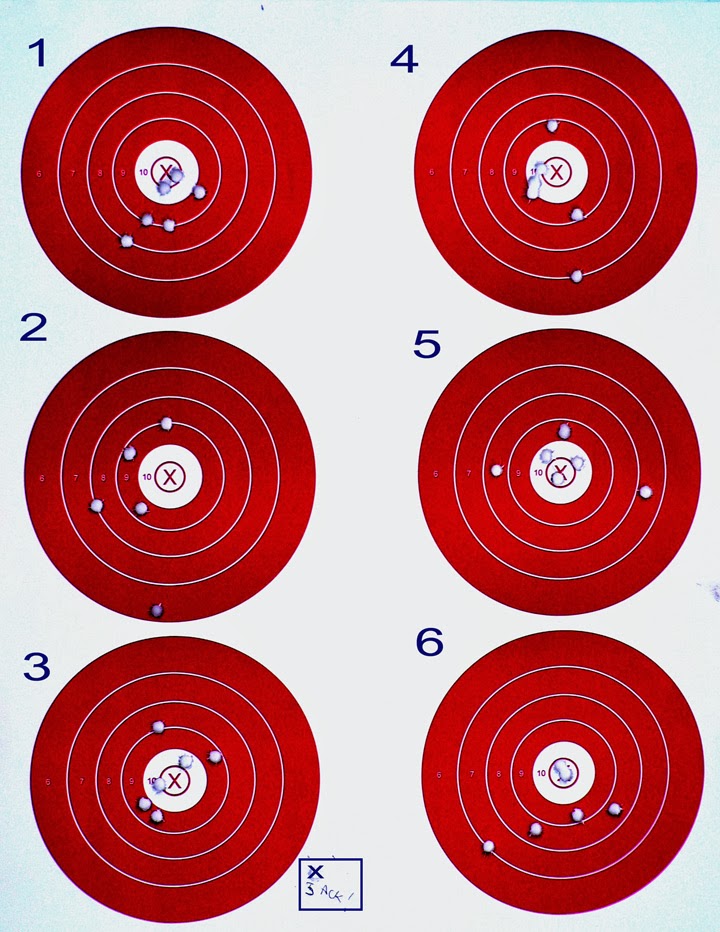 I was experimenting with grip and timing. As you can tell, after I totally blew it going too fast on my 2nd target, setting loose one round (3rd of 6) waaaay down below the #3 target, I regrouped to shoot my ‘best of six’ at the #3 target, with all 6 rounds under 3” as a group.

This is a standard silhouette size target shot at 15 yards. (It's not one of the B27 targets because those are more about 5 times more expensive a pop than the 'house' targets) 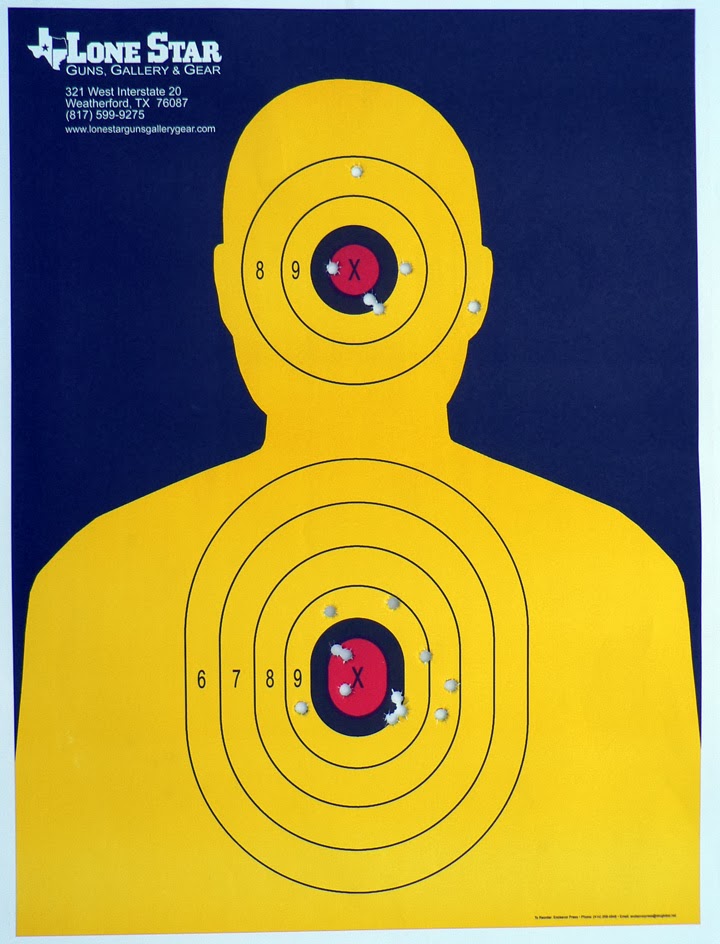 I shot rapid fire 6 shots twice at the torso. The results prompted me to try and shoot the last 6 round magazine in two 3 round rapid-fire groups at the head. I made a conscious effort to “aim small to miss small” and factoring for range, my angular error in aiming was smaller at 15 yards than it was at 7 yards. The 17th of 18 rounds would have been non-lethal.

Concealable, Controllable, Reliable. I can live with that.
Posted by SMSgt Mac at 22:36